In a New York Times column entitled “Nobody Understands Debt,” Nobel Prize-winning economist Paul Krugman writes that “the way our politicians and pundits think about debt is all wrong, and exaggerates the problem’s size.” His dominant message is that our national debt is not a major problem, and Washington has an “ill-informed obsession” with it.

Krugman concedes that government debt isn’t totally “harmless,” but the only harmful scenario he raises is that “taxes must be levied to pay the interest,” and this imposes “some cost on the economy, if nothing else by causing a diversion of resources away from productive activities into tax avoidance and evasion.”

Krugman’s portrayal of this issue neglects key facts surrounding the potential consequences of unchecked government debt. Consider, for example, the results of a 2012 paper in the American Economic Review in which researchers examined the record of national debt and economic growth in 20 advanced economies (such as the United States, France, and Japan). Using 2,000+ data points from over 200 years, the authors found that countries with national debts above 90% of GDP averaged 34% less real annual economic growth than when their debts were below 90% of GDP.

Likewise, a paper published by the Political Economy Research Institute at the University of Massachusetts, Amherst, examined national debts and economic growth in 20 advanced economies from 1946-2009. These researchers found that countries with national debts over 90% of GDP averaged 31% less real annual economic growth than when their debts were 60-90% of GDP.

These numbers may seem difficult to digest, but their implications can be clearly illustrated. The following graph shows what our nation’s economy would look like if real economic growth had averaged 30% lower over the past 40 years: 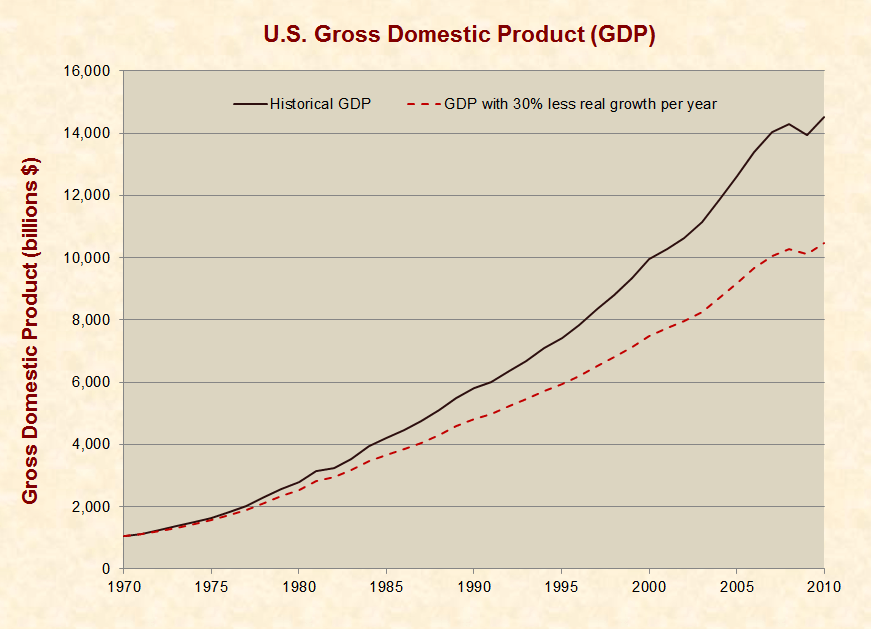 In short, GDP would be about 28% below what it currently is. Notably, the federal government exceeded a gross debt/GDP level of 90% in the second quarter of 2010.

Krugman also cites World War II as a reason not to be overly concerned about our current debt, stating that our debt then “was significantly bigger, as a percentage of G.D.P., than debt today,” and it “didn’t prevent the postwar generation from experiencing the biggest rise in incomes and living standards in our nation’s history.”

This synopsis ignores a crucial distinction between the United States of 1946 and that of today: the existence of multi-trillion dollar obligations that are now bearing down on us from programs such as Medicare and Medicaid. Consider the following contrasts in spending, taxes, and debt from the two comparative eras.

After the end of World War II, federal spending dropped steeply, and for the 40 years that followed, expenditures (as a portion of GDP) averaged 42% lower than the last year of the war. Consequently, publicly held debt plummeted from 109% of GDP in 1946 to 36% in 1985. This enormous reduction in debt occurred in a period when federal receipts averaged 18% of GDP.

In contrast, the Congressional Budget Office projects that under current policy, over the next 40 years, federal revenues will average 19% of GDP while spending (as a portion of GDP) will average 35% higher than in 2010 and over 78% higher than in the four decades that followed World War II.

With this increase in spending, which stems almost entirely from entitlement programs, publicly held debt is projected to rise from 66% of GDP in 2011 to 344% in 2050—or an enormous 277 percentage point increase.

Krugman’s current analysis of the national debt is also inconsistent with his own earlier pronouncements. In 2003, during the Bush administration, Krugman warned that budget deficits had “reached catastrophic proportions.” He later said he was a mistaken about this—but only after he began defending Obama and the Democrats as debt rose at 13 times the rate that it did under Bush and the Republicans.

Correction (5/7/2013): An earlier version of this article cited a 2010 paper published in the American Economic Review that has a major error in it. This article has been updated with new research that does not contain this error.