FactCheck.org is a project of the Annenberg Public Policy Center of the University of Pennsylvania. Its mission is to “apply the best practices of both journalism and scholarship” to “reduce the level of deception and confusion in U.S. politics.”

Recently, FactCheck published an article (also published in a condensed form by USA Today) that accuses Michelle Bachmann of “ignoring the evidence” that the payroll tax cut created jobs. What evidence is this?

First, the country has added jobs since the payroll tax cut was enacted — more than 1.4 million of them — and the unemployment rate has gone down from 9.4 percent to 8.6 percent. Second, economists say that cutting the payroll tax rate leads to job growth.

Ironically, in September 2010, FactCheck claimed that the 2009 American Recovery and Reinvestment Act (a.k.a Obama stimulus) created jobs, despite the fact that millions of jobs were lost in wake of its passage. If FactCheck applied the same standard to the stimulus as it did to the payroll tax cut, it would have cited the ensuing drop in employment as evidence that the stimulus destroyed jobs.

Yet, FactCheck claimed the opposite was “the truth” based upon a Congressional Budget Office report estimating that the stimulus increased “the number of people employed by between 1.4 million and 3.3 million.” However, FactCheck neglected to mention an important caveat in this report. This is the disclaimer that the data are “are not as helpful in determining” the effects of the stimulus “as might be supposed because isolating the effects would require knowing what path the economy would have taken in the absence of the law.”

In plain language, there are numerous variables that affect the economy, and there is no factual way to isolate the effects of the stimulus.

What we can factually determine, however, is the approximate change in employment in the wake of the stimulus, just as FactCheck did with the payroll tax holiday. As the graph below shows, the U.S. has currently lost 937,000 jobs since the stimulus passed and had lost 2.8 million jobs at the time when FactCheck said the stimulus created jobs. 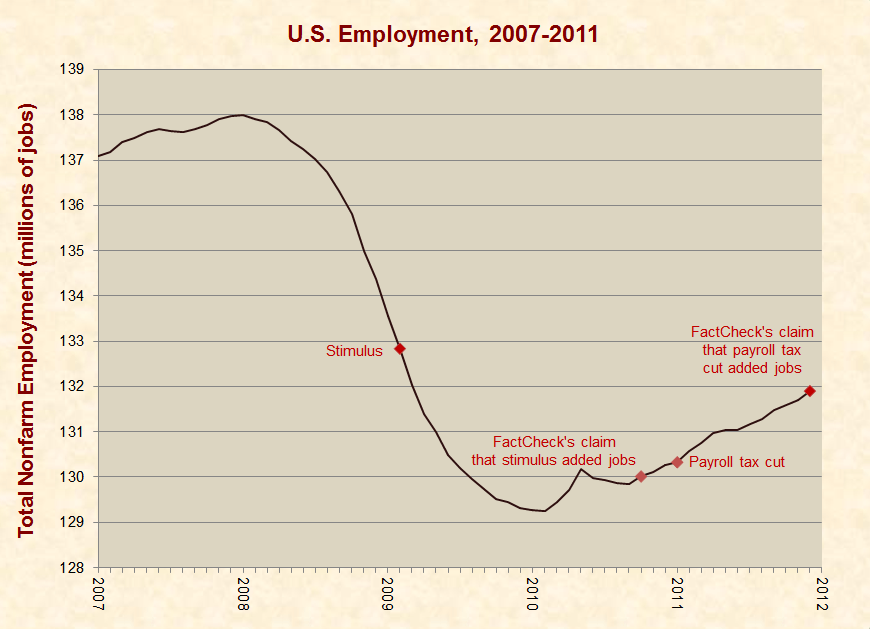