During a recent interview on 60 Minutes, Barack Obama stated that “our deficit problems would be solved” if we:

• reformed “some of our health care programs, like Medicare and Medicaid,”
• cut “discretionary spending,”
• and went back to tax rates “that would still be lower than they were under Ronald Reagan.”

As a matter of fact, these items are already a part of what the Congressional Budget Office (CBO) calls “current policy.” And under this policy, the CBO projects that our nation’s publicly held federal debt will multiply by more than five times over the next 40 years.

President Obama’s first item—reforming health care programs like Medicare and Medicaid—was enacted into law just last year. The Affordable Care Act, also known as Obamacare, contains more than 900 pages of reforms to our nation’s healthcare system, including major changes to the Medicaid and Medicare programs. This bill was crafted and passed exclusively by Democrats (without a single Republican vote in the House or Senate). On the day Obama signed it into law, he said it would “achieve the biggest reduction in our long-term deficits since the Balanced Budget Act of the 1990s.”

The second and third items, cutting discretionary spending and going back to Reagan-era tax rates are also part of the CBO’s current policy scenario. In this scenario, spending on all government functions but mandatory healthcare, Social Security, and interest on the national debt drop from 12.5% of GDP in 2010 to 9.9% in 2015. This amounts to a 21% decrease among programs that encompass all discretionary spending and some mandatory spending.

Also, under current policy, federal taxes actually rise to 5% above Reagan-era levels. During Ronald Reagan’s presidency (1981-1989), federal receipts averaged 18.2% of our nation’s gross domestic product (GDP). For comparison, the CBO’s current policy scenario has revenues exceeding this level in 2014 and eventually settling in at 19.3% of GDP.

In sum, the CBO’s current policy scenario looks a lot like Obama’s wish list, with one notable exception, which is that it excludes a provision of Obamacare that the Medicare Trustees call “impracticable” because it cuts Medicare payments for numerous healthcare services to “less than half of their level under prior law” (pages 229 and 265-266).

So how does the national debt fare under this scenario? This graph shows the results: 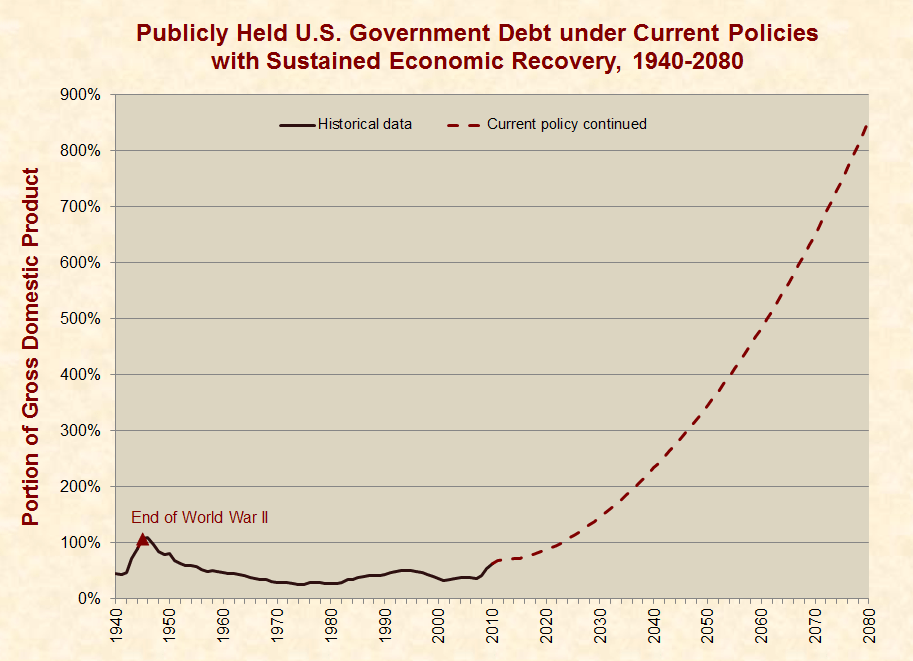 In the same interview, Obama also said that “our deficit problems are completely manageable” but Republicans have been unwilling to compromise and “put country ahead of party.” Yet, for the first two years of his presidency, Obama enjoyed a 79-seat Democratic majority in the House and an 18- to 20-seat effective majority in the Senate.

There are many factors that affect the national debt beyond the current occupants of the White House and U.S. Capitol, so one cannot logically draw cause and effect conclusions based solely upon this, but near the outset of his presidency, Barack Obama stated:

I refuse to leave our children with a debt that they cannot repay. And that means taking responsibility right now, in this administration, for getting our spending under control.

That was in February of 2009, about a month after he took office and a week after he signed the first of his “stimulus” bills. For the next 22 months, President Obama had almost free rein to enact his legislative agenda, and he used it to increase spending. Now he claims that our deficit problems would be fixed if Republicans weren’t standing in his way.

NOTE (11/8/12): An earlier version of this article incorrectly stated that Obama had an 8- to 10-seat effective majority in the Senate.