My aspiration for the country—and I believe we can achieve it—is 4% growth as far as the eye can see. Which means we have to be a lot more productive, workforce participation has to rise from its all-time modern lows. It means that people need to work longer hours and, through their productivity, gain more income for their families.

Other presidential candidates and pundits of all political stripes pounced on these remarks. Hillary Clinton, for example, declared that “Anyone who believes Americans aren’t working hard enough hasn’t met enough American workers.”

A spokesman for Ted Cruz’s campaign said, “The problem is not that Americans aren’t working hard enough. It is that the Washington cartel of career politicians, special interests and lobbyists have rigged the game against them.”

Fox News commentator Eric Bolling stated that Bush “was right with labor participation” but “wrong with hours worked, and he was wrong with productivity. Those things are very strong.”

The clear lesson is that it is politically dangerous to tell voters that they need to work harder, even though the latest data from the Census Bureau’s American Time Use Survey show that U.S. residents aged 15 and older now spend an average of:

Political posturing aside, Bush’s observations are consistent with the facts of these matters, and they have exceedingly important implications.

The nation’s productivity affects all Americans, but it is especially vital for people with low incomes, because low-wage earners who live in nations with high levels of productivity have much better living standards than their peers in less productive nations. There are many ways to demonstrate this, but one of the clearest involves the purchasing power of McDonald’s workers. In the United States, McDonald’s workers can buy about 2.4 Big Macs with their earnings from an hour of work, but this drops to:

This amounts to a staggering 500% premium in purchasing power in the U.S. versus Latin America. As documented by Princeton economics professor Orley C. Ashenfelter, McDonalds’ workers across the world perform the same jobs with the same levels of productivity, but because they live in societies with vastly differing levels of productivity, these workers have vastly different standards of living.

With the facts above in mind, consider these disturbing trends in economic and productivity growth since the Great Recession ended in June 2009:

The preliminary outlook for 2015 is just as bleak or worse. The U.S. Department of Labor has announced that productivity actually dropped at a 3.1% annual rate in the first quarter of 2015. Also, the Federal Reserve recently downgraded its 2015 growth forecast for gross domestic product growth (GDP) to a range of 1.8% to 2.0%. This represents a sharp decline from its previous forecast in March of 2.3% to 2.7%, which was already well below the prerecession 50-year average of 3.4%.

Such outcomes are especially troubling given that the economy typically performs well in the wake of recessions. In fact, a decade ago, Paul Krugman argued that “the economic expansion under President Reagan did not validate his economic doctrine,” because “rapid growth is normal when an economy is bouncing back from a deep slump.” (Hat tip: Larry Elder)

Given the size and sophistication of the U.S. economy, the reasons for the current economic weakness entail many complexities, but they all boil down to the two simple points Bush mentioned: (1) how much people work and (2) how effectively they work. These factors form the very definition of economic output. Per the textbook Economics: Principles and Policy, “GDP = Hours worked × Labor productivity.”

America’s total work hours and productivity tend to increase over time due to population growth and the advance of technology, but the rate of increase for both have been feeble compared to the past, and hence, so has economic growth.

Many factors can affect work hours and productivity, but three of the most direct and drastically changing over recent years are government debt, regulations, and social programs. As shown below, all of these have undergone pronounced changes that may explain why the U.S. (and other nations) are experiencing weak economic growth.

The Impact of Government Debt

One of the surest paths to decreased productivity is excessive government debt, and federal debt has recently grown at a faster rate and to higher levels than at any time in U.S. history except World War II. Worse yet, unlike the World War II debt—which rapidly declined in its aftermath—the current debt is slated to skyrocket to unprecedented levels under current federal policies.

One of the primary reasons government debt harms productivity is that it diverts money away from investments that increase productivity. In the words of CBO, “Because federal borrowing generally reduces national saving, the stock of capital assets, such as equipment and structures, will be smaller and aggregate wages will be less than if the debt were lower.”

Similarly, CBO estimated in 2009 that Obama’s stimulus would have a positive short-term effect on GDP and a negative long-term effect (starting in 2015), because when “people hold their wealth as government bonds rather than in a form that can be used to finance private investment, the increased debt will tend to reduce the stock of productive private capital.”

Notably, the U.S. national debt surpassed 90% of GDP in 2010 and now stands at 103%. Likewise, the Eurozone and Japan have respective debts of 93% and 245% of GDP, and both of them are suffering from weak productivity gains.

The Impact of Regulations

Another key hindrance to productivity is laws and regulations that prohibit people from using cost-effective means of production or divert them from work to comply with red tape. The ostensible purpose of most laws and regulations is to provide benefits for society or certain segments of it, but to accomplish this, they typically use the force of law to make people act in ways that they normally would not. This often entails some sort of economic tradeoff that impairs productivity.

The Obama administration has issued a report estimating the costs and benefits of major federal regulations from 2003 to 2013. This report states that the costs were somewhere between $57 billion and $84 billion, while the benefits were much greater at $217 billion to $863 billion.

Conversely, the authors of a 2013 paper in the Journal of Economic Growth conducted a study finding that the effects of federal regulations on the U.S. economy have been “negative and substantial.” They estimate that GDP would now be more than three times larger if federal “regulation had remained at its 1949 level.”

In truth, the costs and benefits of regulations are often impossible to objectively measure. As explained in the textbook Microeconomics for Public Decisions, it can be “relatively easy” to craft a cost-benefit analysis to “produce a desired outcome,” and “it is practically impossible to predict all the future impacts” of a government program, “let alone their magnitudes and their probabilities of occurrence.”

One thing, however, is certain: People have an innate motive to maximize their productivity in order to maximize their income, and governments often restrict this to achieve certain social goals or a common good. Also, every minute that workers spend complying with government mandates is a minute that they don’t spend producing goods and services. Some examples of such dynamics include:

That said, major federal laws and regulations have abounded in recent years. Again, it is notoriously difficult to accurately quantify them, but when Obama entered office in 2009, he had a 79-seat Democratic majority in the House and an effective 18- to 20-seat majority in the Senate. For two years, this gave him ample power to enact his agenda on a broad range of issues.

Even after Democrats lost control of Congress, Obama promised to use his “pen” and “phone” to further his aims, and he has done just that. Supporters and critics of Obama heatedly debate the merits and downsides of his actions, but both agree that they have been far-reaching and substantial. Hence, they likely are having pronounced effects on productivity.

Significantly, the only time in modern U.S. history when productivity growth was worse than it is now occurred in the wake of a major regulatory expansion in the 1970s.

The Impact of Social Programs

The impact of social programs on work hours has been plainly stated by Lawrence Summers, president emeritus of Harvard University, former chief economist to the Obama administration, and former Treasury secretary under Clinton. He wrote that “government assistance programs” provide people with “an incentive, and the means, not to work.”

In recent years, spending on government assistance programs, technically called “social benefits,” have consumed more of the U.S. economy than ever recorded in the nation’s history: 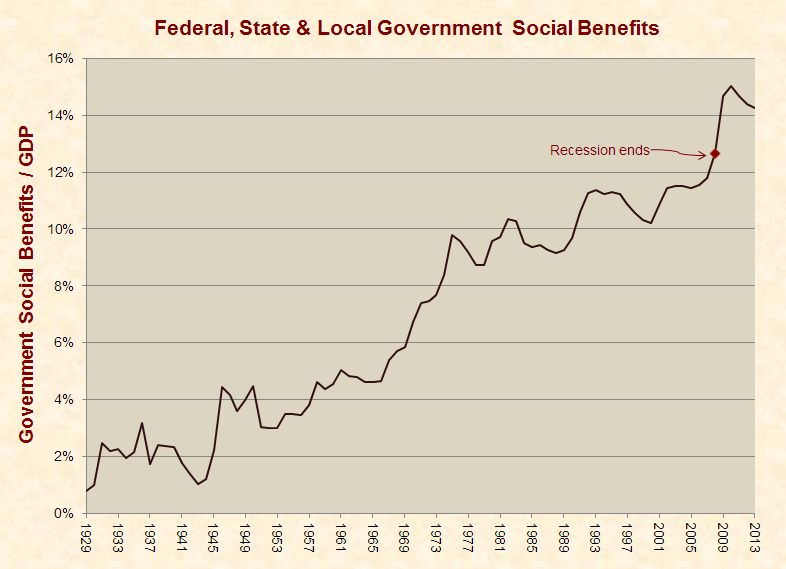 In keeping with this expansion of social program spending, the U.S. is currently at or near modern lows in:

None of this is surprising. As detailed by CBO, government assistance programs:

These realities apply to adults of all ages, including senior citizens, who have experienced significant increases in life expectancy without corresponding increases in the ages at which they begin to collect Medicare and Social Security. For example, since the outset of the Social Security program, the average male retiree has enjoyed a 43% increase in the amount of time collecting Social Security benefits.

Economists of all political persuasions have expressed concern over the current dismal state of economic and productivity growth. Government debt, regulations, and social benefits are likely not the only causes of this, but each of them is significant in its own right, and in combination, they can be toxic to living standards. This is because they all impede productivity or reward idleness.

Relative to other developed nations, the U.S. ranks 19th out of 34 in labor force participation and 15th of 33 in annual work hours per worker. These are in the middle of the pack, but because the U.S. ranks 4th out of 43 nations in productivity per hour of work, it ranks 6th in average income per person.

Experience has shown that this could change. In 1960, America led the world by a wide margin in GDP per person, producing 30% more than the next closest nation. It is now 11th among 226 countries.

In sum, whether or not Americans or any other people improve their living standards will boil down to how much they work and how productively they do it. Current trends are not promising, but individuals have the power to make a difference for themselves and others through their work ethic, ingenuity, and the political leaders they elect.