In a recent article and accompanying video produced by the Tax Policy Center, tax analyst Roberton Williams reports that 43% of Americans won’t pay federal income taxes this year. Williams, a former deputy assistant director for the Congressional Budget Office, also states that “many commentators” have twisted such statistics to suggest “that nearly half of all households paid no tax at all when, in fact, nearly everyone pays something.”

He emphasizes that regardless of whether someone pays federal income taxes, almost all Americans pay “Social Security and Medicare payroll taxes, state and local sales taxes, excise taxes, or some other levy.” In the video, he adds that “pundits and politicians” have misused data about those who don’t pay federal income taxes “to portray a world of makers and takers,” where roughly half of Americans pay for benefits that go to the other half.

The article and video have been widely cited by organizations such as CNBC, Fox News, the Drudge Report, the Committee for a Responsible Federal Budget, and the Illinois Policy Institute.

Williams is correct that the federal income tax is just one of many taxes, and hence, it is misleading to ignore other taxes when discussing makers and takers. However, he ignores another crucial aspect of this issue, which is that the person who pays $1,000 in taxes and receives $10,000 in government benefits is a taker on net. Even though this person pays “something,” as Williams notes, he receives far more from government than he pays in taxes.

A 2012 report from the Congressional Budget Office (CBO) provides data that speaks to this issue. These are estimates of the household distribution of federal taxes, market income, and government transfers from 1979-2009. To define these terms, market income comes from work and investments, while government transfers include “cash payments and in-kind benefits from social insurance and other government assistance programs.”

The CBO data, which is analyzed below, shows that in 2009 roughly half of U.S. households received more in government transfers than they paid in federal taxes. For example, the lowest-earning 20% (or quintile) of households earned an average of $7,600 in market income, received $22,900 in government transfers, and paid $0 in federal taxes. Similar data for all the quintiles are graphed here: 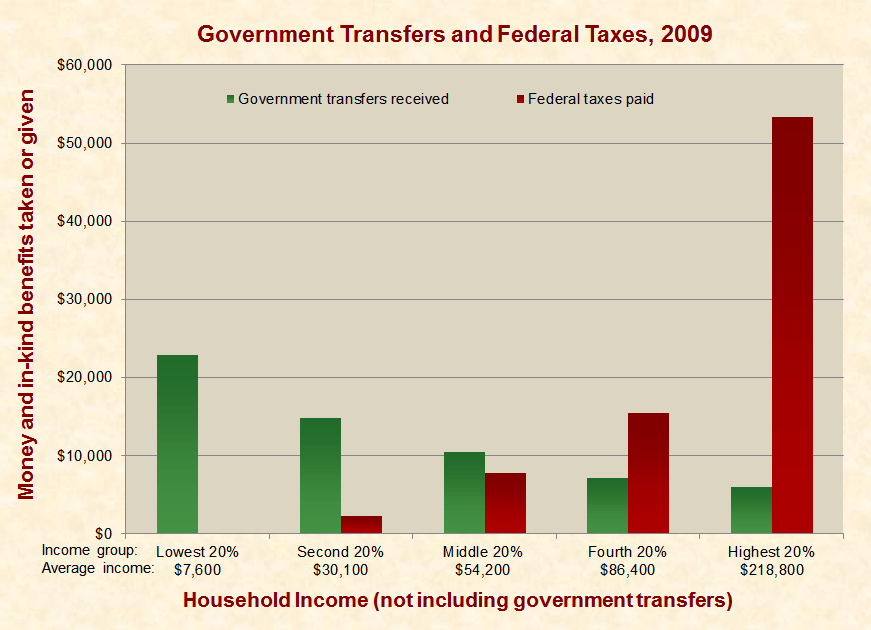 It is important to note that the figures above are averages, and not every household in these income groups receives or pays what is shown. It is also important to note that there are substantial changes among individual households over time. People tend to pay more taxes during their working years and receive more transfers as they become eligible for Social Security and Medicare.

Nonetheless, over the past three decades, there has been a clear trend of increasing government dependency. In 1979, only the lowest-earning 20% of households paid less in federal taxes than they received in government benefits. Since then, both the second and middle quintiles have moved into this territory: 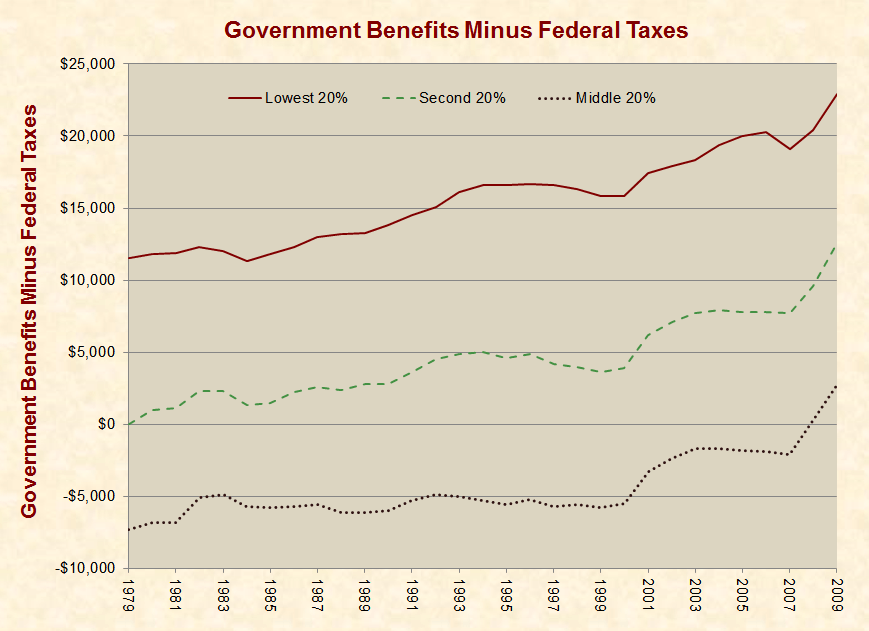 In an email to Just Facts, CBO stated that it currently does not have a “specified release date” for such data in more recent years. However, when the data is released, it will likely show that the 2011/2012 payroll tax holiday created markedly larger proportions of government transfers to taxes for the lower income groups.

Conversely, in 2013, the expiration of the payroll tax holiday and other tax breaks, along with the waning of the Great Recession, may move the middle quintile back into the category of those who pay more in federal taxes than they receive in government benefits.

These increasing government transfers have been caused by many factors, such as general economic malaise from the Great Recession, escalating healthcare expenditures, more people receiving Medicaid and disability benefits, and increases in life expectancy that have raised spending on Social Security and Medicare. Accordingly, during the past half century, social programs have consumed a rising share of the federal budget, and CBO projects that this trend will continue for the foreseeable future.

In summary, when addressing the issue of makers and takers, statements about how many Americans don’t pay federal income taxes can be misleading if further context is not provided. Likewise, declaring that “nearly everyone pays something” can be just as misleading if one does not also consider how much they pay and how much they take.

Additional reading:
High-income earners pay a much higher federal tax rate than the middle class
What portion of the federal budget is spent on the military?
Can we prevent a debt-driven economic collapse without reforming entitlements?