In a recent speech at Binghamton University in which he lobbied for spending on various welfare programs, President Obama claimed that “we don’t have an urgent deficit crisis. The only crisis we have is one that’s manufactured in Washington, and it’s ideological.”

To support his point, Obama compared the current annual deficit to those of recent years. “The deficit has been cut in half since 2009 and is on a downward trajectory,” said Obama to his audience’s applause. However, a broad factual perspective shows the situation is not as rosy as the president paints it out to be.

The deficits of recent years have been the largest in modern history, peaking at 10.1% of the entire nation’s economy (GDP) in 2009. For context, the 2009 deficit was 68% larger than any other deficit since the World War II era, and it was 6.1 times larger than the average deficit from 1947-2008 (see graph below). 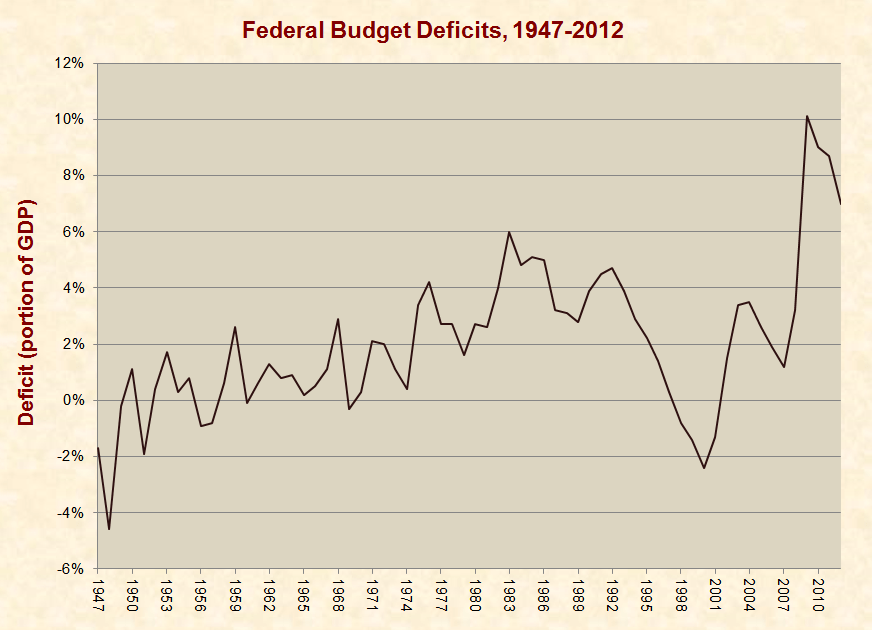 More importantly, Obama dodged the crux of this issue by avoiding any mention of the national debt. This is crucial because the financial condition of the federal government is not just a function of how much it borrows in any given year, but more significantly, how much it has borrowed in total.

In the same Binghamton University speech in which Obama claimed that federal finances are healthy, he repeatedly addressed the issue of student loan debt. Concerning this subject, it would have been ridiculous if he had told his audience, “There is no need to worry about this debt because once you get out of college, your annual student loan deficit will quickly decline.” Such reasoning is transparently illogical, but it is implicit in the President’s portrayal of the federal government’s finances.

In striking contrast, on March 16, 2006, then-Senator Obama gave a speech on the floor of the U.S. Senate in which he denounced “reckless fiscal policies” that had driven federal deficits to “historically high levels.” Among other things, he stated that:

• “America’s debt weakens us domestically and internationally.”
• “America has a debt problem and a failure of leadership.”
• “Washington is shifting the burden of bad choices today onto the backs of our children and grandchildren.”

On the day Obama gave that speech, the national debt was $8.3 trillion or 61% of the nation’s economy. The national debt now stands at $16.7 trillion or 101% of GDP. Thus, even after adjusting for economic growth (which accounts for population increases and inflation), the current debt is 66% larger than the debt Obama condemned in 2006.

Regarding the implications of this debt, in March 2013, the Congressional Budget Office (CBO) reported that the current national debt is “very high by historical standards” and threatens “serious negative consequences” for the following reasons:

If the amount of debt held by the public remains so large, federal spending on interest payments will increase substantially when interest rates rise to more normal levels. Because federal borrowing generally reduces national saving, the stock of capital assets, such as equipment and structures, will be smaller and aggregate wages will be less than if the debt were lower. In addition, lawmakers will have less flexibility than they ordinarily might to use tax and spending policies to respond to unanticipated challenges. Moreover, such a large debt poses an increased risk of precipitating a fiscal crisis, during which investors would lose so much confidence in the government’s ability to manage its budget that the government would be unable to borrow at affordable rates.

In sum, CBO cautioned that the national debt—if left unaddressed—is going to suppress workers’ wages, degrade the government’s capacity to weather challenges, and may trigger a financial crisis. Furthermore, the same report projected that under current polices, publicly-held federal debt is going to rise by 20% of GDP over the next 10 years. Nevertheless, the President characterized CBO’s projections by stating, “We don’t have an immediate crisis in terms of debt. In fact, for the next 10 years, it’s gonna be in a sustainable place.”