Writing in The Nation, John Nichols asserts that “the place to begin” for deficit reduction is “with necessary cuts to a bloated-beyond-belief Pentagon budget.” Buttressing this claim, he cites a Huffington Post op-ed written by Congressmen Barney Frank and Ron Paul.

In this commentary, Frank and Paul assert that “the Pentagon budget for 2010 is $693 billion—more than all other discretionary spending programs combined. Even subtracting the cost of the wars in Iraq and Afghanistan, military spending still amounts to over 42% of total spending.”

The truth is that all military spending—including the Pentagon budget, veterans benefits, and the wars in Iraq and Afghanistan—accounted for 22% of total federal spending in 2010.

So how do Frank and Paul come up with a figure of 42% for a subset of this spending? First, they use technical jargon that leaves room for uncertainty in the minds of most people. Huffington Post op-eds are not intended for budget analysts, but for the average reader, most of whom have no idea that discretionary spending only accounts for 40% of total federal outlays. This is because discretionary spending excludes all entitlement programs that can spend taxpayer money without Congress passing new spending bills. Among the larger of these programs are Food Stamps, Social Security, Medicaid, the Children’s Health Insurance Program, unemployment benefits, and Medicare.

Next, Frank and Paul use imprecise verbiage that is almost certain to be misunderstood by the general public. Again, they wrote that “even subtracting the cost of the wars in Iraq and Afghanistan, military spending still amounts to over 42% of total spending.” One would think that the phrase “total spending” means total spending, but it does not. It means discretionary spending, a fact that can only be deduced by being familiar enough with federal budget data to know it is mathematically impossible for this to mean total spending.

Such misleading portrayals of military spending (see more examples here and here) have left even highly educated individuals steeped in misconceptions. For example, earlier this year, a Professor Emeritus of Political Science and Public Administration at the University of Missouri-Kansas City wrote a letter to the Kansas City Star claiming that “Congress is cutting Medicare and Social Security to reduce the debt, yet we spend three times as much on national security.”

The reality is that we spend about 55% more on these two programs combined than we do on national security. The professor’s assertion may have been true 40 years ago, but the composition of the federal budget has changed dramatically since that time, and social spending programs now consume the lion’s share of the budget: 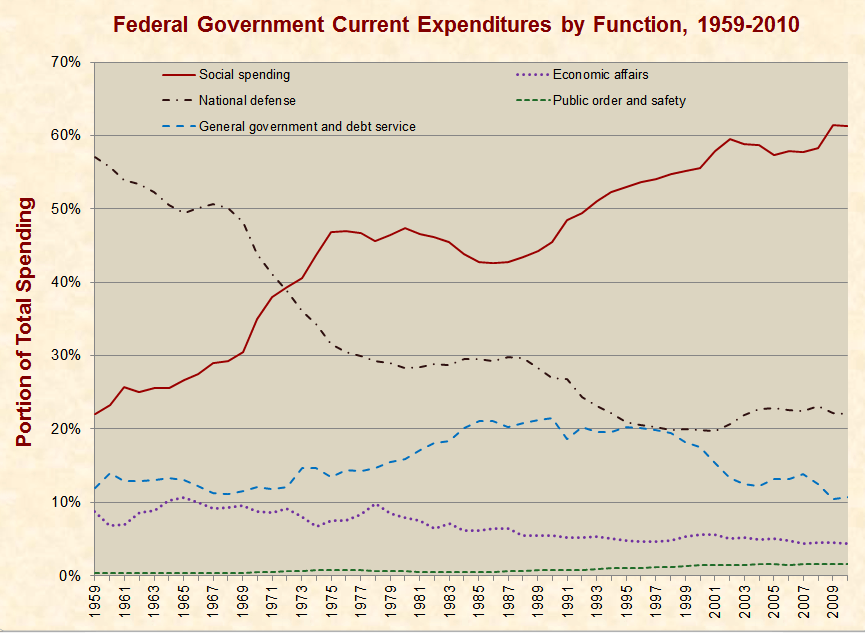