Note: The first part of this two-part series is located here.

In addition to his skewed tax rate comparisons, Buffett advanced several other misleading narratives in his recent New York Times commentary. These pertain to (1) the negative effects of higher tax rates, (2) the notion that his proposed “minimum tax” will stop lobbyists from obtaining tax breaks, and (3) what it will take to get the national debt under control.

Buffett opened his op-ed by declaring that no negative economic fallout can possibly result from increasing taxes on the wealthy. To drive the point home, Buffett said that when he managed funds for investors, “Never did anyone mention taxes as a reason to forgo an investment opportunity that I offered.” However, the written record of Buffett’s storied career betrays this rhetoric. Indeed, some of his primary business and investment strategies involve calculated decisions to elude taxes:

[Buffett’s] approach to portfolio management may appear quirky … but it has two important economic benefits … It increases aftertax returns. When you sell a stock at a profit, you will be hit with capital gains taxes, eating into your profit. The solution: leave it be. If you leave the gain in place (this is referred to as an unrealized gain), your money compounds more forcefully. Overall, investors have too often underestimated the enormous value of this unrealized gain—what Buffett calls an “interest-free loan from the Treasury.” –The Warren Buffett Way, pages 173-4

Berkshire doesn’t pay dividends, and Buffett doesn’t like them. Why? Taxes. When dividends are paid, income is taxed twice. First, the company pays income tax; then the shareholder pays tax on his dividends. – The Winning Investment Habits of Warren Buffett & George Soros, page 119

Unless you’re in the lowest tax bracket, you should buy only tax-free (municipal) bonds outside your retirement accounts. Otherwise too much of your bond income will end up in the hands of the IRS. – The Intelligent Investor, page 106 (The preface and appendix of this book were authored by Buffett, and the following quote from Buffett appears on its cover: “By far the best book on investing ever written.”)

While these tax-avoidance strategies may have helped Buffett, creditable sources explain how such logical reactions to taxes can harm the economy. For example:

[I]t is marginal tax rates that affect incentives for taxpayers to work, to save, or to take advantage of various tax preferences. These incentives may distort taxpayer choice, which in turn may promote an inefficient allocation of society’s labor and capital resources. A less efficient allocation of labor and capital resources leaves society with a lower level of output of goods and services than it would otherwise enjoy in the absence of tax-system induced economic distortions. – U.S. Joint Committee on Taxation

[H]igh capital gains tax rates discourage the realization of capital gains and encourage the realization of capital losses. Investors induced to hold appreciated assets because of capital gains tax when they would otherwise sell are said to be “locked in.” Lock-in effects impose efficiency losses when investors are induced to hold suboptimal portfolios with inappropriate risk or diversification, or to forego investment opportunities offering higher expected pre-tax returns. – NTA Encyclopedia of Taxation and Tax Policy

[B]ecause the [corporate income] tax reduces capital investment in the United States, it reduces workers’ productivity and wages relative to what they otherwise would be, meaning that at least some portion of the economic burden of the tax over the longer term falls on workers. – Congressional Budget Office

All of the economic impacts outlined above can reduce productivity, which inflicts escalating harm on America’s economy. As explained by the Congressional Budget Office, “A small change in the growth of productivity can, over a long period, have a larger effect on GDP than most recessions do … [because] the shortfall from a recession is generally temporary, whereas a change in the long-term rate of productivity growth reduces output by an ever-increasing amount.” This is only one of many economic consequences that can result from higher taxes on the wealthy, and of course, those with lower incomes.

Nevertheless, to support his argument that higher taxes on the wealthy won’t have negative effects, Buffett cited the rapid economic growth America enjoyed in the 1950s when top marginal federal tax rates on income and capital gains were far higher than now. This narrow focus on a few federal tax brackets obscures the countless larger realities that define these eras. For instance, during the 1950s, combined taxes at all levels of government consumed 23% of the U.S. economy, as compared to 26% over the past ten years. More relevantly, combined government spending, which is a broader measure of government’s economic footprint, averaged 22% of the economy in the 1950s versus 33% over the past ten years—a 50% increase. As the graph below shows, the 1950’s were marked by smaller government, while since 2009, government spending has been a greater portion of the economy than ever recorded in the history of the U.S., including the peak of World War II: 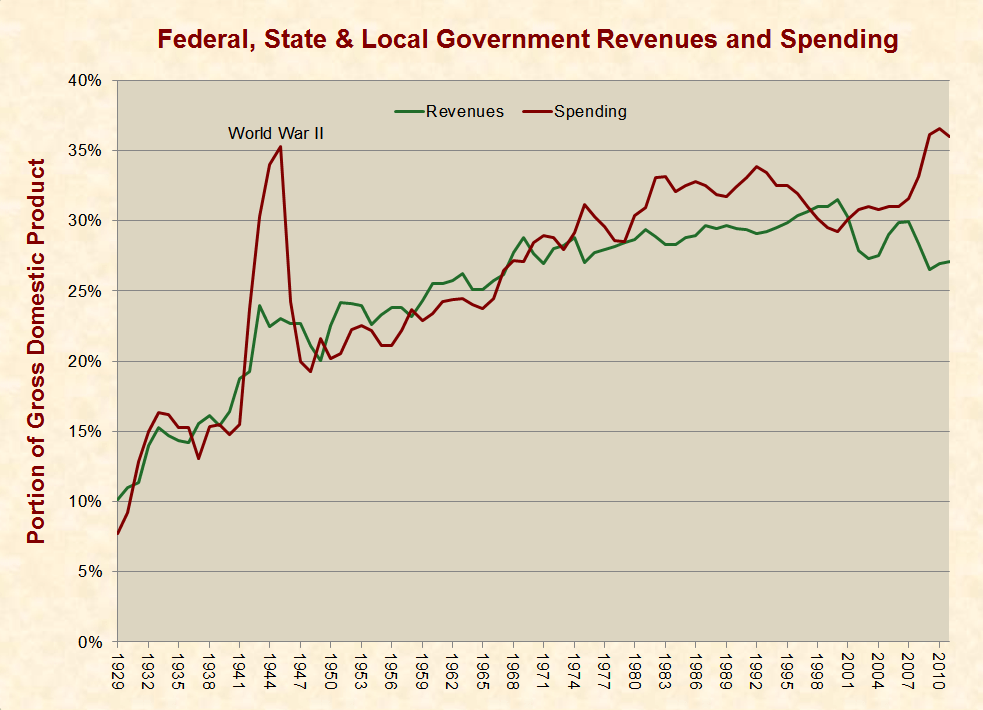 Perhaps most significantly, since the late 1950s, the federal government has spent a rapidly increasing share of its budget on social programs, many of which reduce peoples’ incentives to work and save, thus depriving the economy of their labor and investment. Even Lawrence Summers, Obama’s former chief economist and Clinton’s Treasury Secretary, affirmed that government assistance programs provide “an incentive, and the means, not to work.”

Buffett’s arguments for raising taxes on the wealthy are very similar to a campaign waged in 1969 to pass the “minimum tax,” which is now known as the “alternative minimum tax” or AMT. Buffett even used the same name (“minimum tax”) to describe his proposal. The detailed history of the AMT is documented here, but the condensed version is that it was sold to the public using rhetoric that targeted a small number of wealthy individuals amounting to 0.0002% of taxpayers. However, the tax was not automatically indexed for wage growth or even inflation, and now unless this tax is reduced, 11% of taxpayers will be liable for the AMT in 2013, and this figure will steadily rise to more than 50% by 2037.

Notably, Congress and President Obama did the same with the Affordable Care Act and did not index its taxes for wage growth or even inflation. Thus, due to a phenomenon known as bracket creep, these taxes—some of which were targeted only at high-income earners—will fall on an ever-increasing share of Americans as time progresses.

Buffett wrote that his proposal for a minimum tax will “block the efforts of lobbyists, lawyers and contribution-hungry legislators to keep the ultrarich paying rates well below those incurred by people with income just a tiny fraction of ours.” This is deceptive not just because of the faulty tax rate comparison—but also because Buffett has proposed a minimum tax on “taxable income,” which excludes numerous categories of income. For example, one of the primary means by which wealthy investors limit their taxes is by investing in tax-free municipal bonds. Since federal law does not classify income from these bonds as “taxable income,” this income would be entirely exempt from Buffett’s minimum tax. Hence, instead of stopping wealthy influence peddlers from securing tax breaks, Buffett’s tax would raise the incentives to lobby so that their favored sources of income can be classified as nontaxable.

Finally, Buffett called for taming the national debt by bringing federal revenues up to 18.5% of GDP while bringing spending down to 21%. Ironically, the Congressional Budget Office has projected that if the Bush tax cuts and even some of the Obama tax cuts are renewed, federal revenues will reach 17.9% of GDP in just two years, which is 97% of Buffett’s preferred tax level. Meanwhile, the Congressional Budget Office has also projected that under current policies, federal spending is going to skyrocket far beyond Buffett’s target due to increasing costs from Social Security and mandatory healthcare programs such as Medicare, Medicaid, and the health insurance subsidies established under the Affordable Care Act. Yet, Buffett pushed for tax increases without offering a single specific proposal to control spending.

Buffett has called on Congress to “offer a realistic and concrete plan” for taming the national debt and has proclaimed that “nothing less is acceptable.” He has also designated revenue and spending levels that would allow the federal government to consume about the same share of the economy that it has averaged for the past 40 years. Paradoxically, to meet these targets, the federal government probably will not need the tax increases that Buffett is demanding, but it will unquestionably need serious spending cuts, which Buffett has thus far failed to address.