In the aftermath of the Dark Knight shooting in Aurora, Colorado, media outlets were awash with misleading claims about violence and firearms. Since the tragic school shooting in Newtown, Connecticut, some of the same false assertions are being repeated, but another has emerged as a common talking point: this is the claim that Australia’s 1996 gun laws and government-funded gun buyback prove such policies are effective in stemming violence. Versions of this narrative have recently been circulated by ABC News, the New York Times, CNN, Slate, the Huffington Post, and countless other smaller outlets.

ABC News, for an example, published an article entitled, “Will Lessons From Down Under Stem the Undertaker Here?” In this piece, correspondent Nick Schifrin reports that strict Australia gun laws passed in 1996 have proved “extremely effective. In the last 16 years, the risk of dying by gunshot in Australia has fallen by more than 50 percent. The national rate of gun homicide is one-thirtieth that of the United States.”

Statistics like these do more to mislead than inform. First, a simple comparison of current firearm homicide rates between countries cannot possibly establish the impact of their gun control laws. This is because there are numerous other factors endemic to each country that impact homicide rates, such as their law enforcement and criminal justice systems, the portion of children raised in single-parent households, poverty rates, and many other relevant variables. Schifrin’s argument is analogous to an argument made by the NRA that right-to-carry states have a 28% lower murder rate than the rest of the country. Such statistics tell us little. To provide any legitimate indication of the effects of gun laws, before-and-after comparisons are almost always necessary.

Schifrin does provide a before-and-after comparison of the “risk of dying by gunshot in Australia” over the past 16 years, but this is deceptive because it accounts for lives taken with guns while failing to account for lives saved with guns. As shown in several studies summarized in the Journal of Criminal Law and Criminology, in the vast majority of cases where someone uses a gun for self-defense, a bullet is never even fired because the would-be assailant retreats when he discovers that his target is armed. Schifrin’s “risk of dying by gunshot” statistic fails to account for such scenarios.

The “risk of dying by gunshot” statistic also fails to account for weapons substitution, which occurs when murderers use whatever weapons are readily available to them. Would someone judge a gun control law to be a success if every averted gun murder were replaced by another type of murder? Of course not, but the press commonly cites statistics that fail to account for such outcomes. For these reasons, to assess the full effects of gun laws on homicides, one must look at all homicides, not just those committed with firearms. 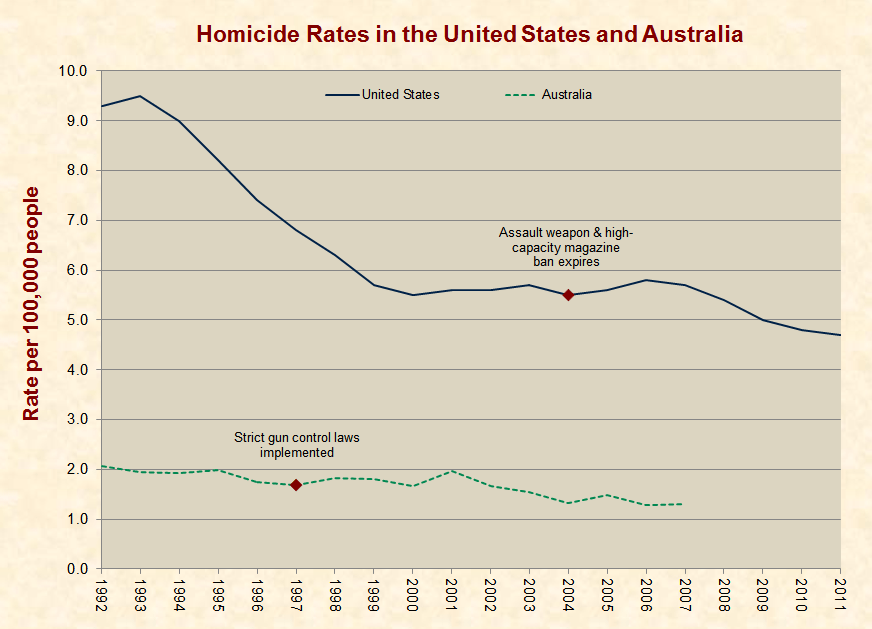 If association equals causation—as the ABC article suggests—the expiration of the federal assault weapons ban was 10 times more effective in reducing homicides than the enactment of Australia’s tight gun laws and gun buyback. Of course, cause and effect cannot be proved because many other factors affect murder rates, and it is practically impossible to accurately isolate all of these effects. Nevertheless, the above graph allows us to observe trends and constrains the impact of many variables because the data is drawn from large population sets with limited demographic changes from year to year.

The other media outlets cited above draw similarly flawed conclusions based upon data from Australia. The New York Times editorial board also points to “a decline in murders involving firearms” that occurred after “the British government banned all private ownership of automatic weapons and virtually all handguns” in 1996. What the editors fail to mention is that homicide rates, which were relatively low to begin with, actually increased in the wake of this ban. Again, this does not prove cause and effect, but it does prove that the Times storyline is not founded in objective reality.

Other fallacies about violence and guns that are being propagated by media outlets include claims that “assault rifles” are legal in the U.S. and that guns are ineffective for self-defense. These and other falsehoods were addressed after the Dark Knight shooting in an article from Just Facts.

In the words of a major gun control analysis published by the National Academies of Science, “Drawing causal inferences is always complicated and, in the behavioral and social sciences, fraught with uncertainty.” This means that simplistic and misleading claims on all sides of the gun control debate have the potential to stoke public opinion for policies that lead to more deaths than would occur in the absence of these polices.