In a recent segment of her Emmy-Award winning television show, Rachel Maddow, an MSNBC host with a doctorate in political science from Oxford University, claimed that:

All of those assertions are false or misleading, and data from the federal government and the same sources cited by Maddow show that:

Below is the documentation of these facts, along with the details of how Maddow has distorted the truth.

Maddow provided no sense of scale for these figures, which is vital to understanding their significance. Instead of providing some basic context, such as how large these shortfalls are compared to the size of the budgets, Maddow simply exclaimed that they are “huge.” She said this four times in less than three minutes while declaring that these budgets had “blown up” and were going “kablooey.”

In other words, the federal deficit that Maddow celebrated is 4.8 to 6.7 times larger than the state shortfalls she decried. 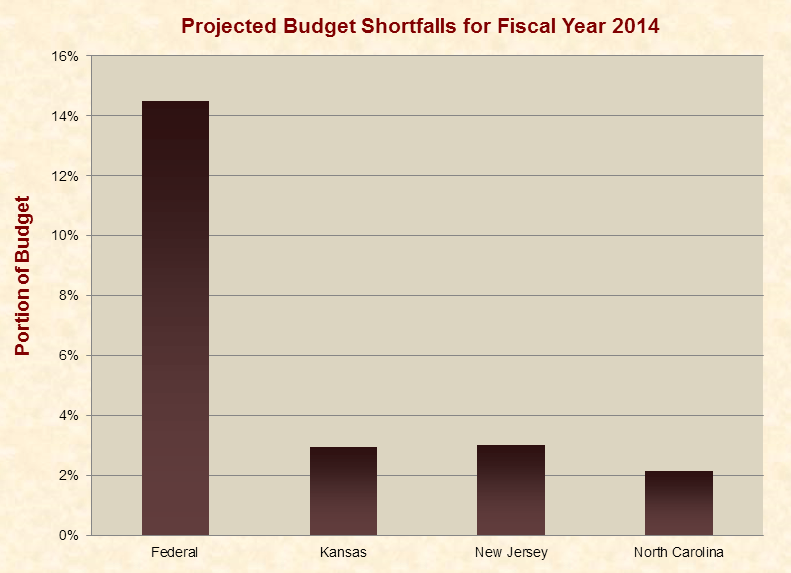 Throughout the segment, Maddow repeatedly used sarcasm to assert that reductions in tax rates inevitably produce lower tax revenues. In her words: “One thing that happens when you cut taxes is that taxes get cut!” That claim may seem intuitive, but it is not true in all cases. 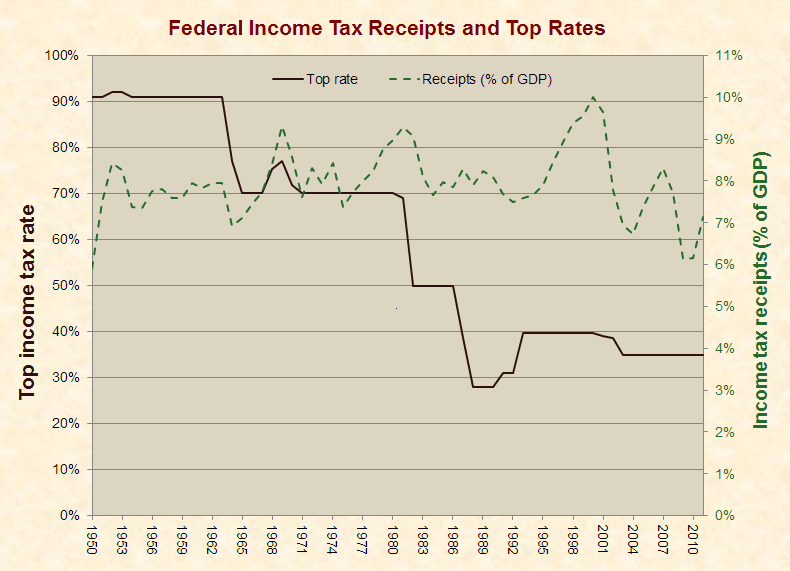 The reason that tax revenues don’t always mirror tax rates is because there are a host of other variables that affect revenues, one of which is that lower tax rates boost people’s incentives to work, thereby generating more taxable income.

As explained by the Congressional Budget Office (CBO), “a lower marginal tax rate on labor income increases the incentive to work, raising the number of hours people work and therefore the amount of output and income.”

The strength of this effect is debatable, and not every cut in tax rates leads to higher revenues. However, even prominent liberal economist Paul Krugman wrote in his 2009 textbook, Economics, that higher tax rates diminish the incentive to earn more income:

Any income tax system will tax away part of the gain an individual gets by moving up the income scale, reducing the incentive to earn more. But a progressive tax takes away a larger share of the gain than a proportional tax, creating a more adverse effect on incentives.

The decline in deficits since 2009 is nothing to brag about

Just two weeks before President Obama was inaugurated in January 2009, CBO projected the path of the U.S. economy and federal budget for the next 10 years based upon current law. These projections showed rapidly improving economic conditions coupled with rapidly declining budget deficits after 2009, as is typical after a recession.

In the words of Krugman, “rapid growth is normal when an economy is bouncing back from a deep slump.” Economic growth, in turn, boosts tax revenues and lessens spending on government assistance programs, all of which serves to shrink deficits.

Before going further, it is important to note that CBO’s current law projections for the federal deficit are not directly comparable to actual outcomes, because such projections often use unrealistic assumptions. However, they do show that just before Obama took office, the laws already in place coupled with the economic growth that regularly follows recessions were expected to progressively reduce the federal deficit, as shown in this graph:

Nevertheless, Obama and supporters like Maddow routinely crow about the declining deficit, using the refrain that it has fallen at the fastest pace since World War II. What they neglect to mention is that every deficit from 2009 to 2012 was larger than any deficit since the World War II era. Thus, there was enormous potential and natural impetus for the deficit to fall.

Yet, even in 2013, four years after the recession ended, the deficit was still 72% higher than the average deficits that occurred solely during the presidency of George W. Bush (without overlap with Clinton or Obama). Obama denounced these Bush-era deficits on the floor of the U.S. Senate in 2006 when he stated that “reckless fiscal policies” had driven federal deficits to “historically high levels.” Now, he and others are bragging about deficits that are significantly worse.

More importantly, the national debt provides a much clearer picture of the financial health of the federal government than the deficit in any given year or string of years. As such, during the same Senate speech, Obama warned that “America’s debt weakens us domestically and internationally,” “America has a debt problem and a failure of leadership,” and “Washington is shifting the burden of bad choices today onto the backs of our children and grandchildren.”

Finally, linking deficits to any particular president or governor fails to account for the actions of congresses, the impacts of preexisting laws, and many other variables that impact government spending and revenues. Hence, to attribute these deficits purely to presidents or governors, as Maddow and many others have done, oversimplifies and misrepresents the facts of these matters.