In the midst of a severe hurricane season and the destruction wrought by hurricanes Harvey and Irma, many people are claiming that man-made global warming has intensified rainfall and hurricanes. However, comprehensive facts show that rainfall and hurricane activity are well within the bounds of natural variation, and there is no cogent evidence that they have increased over the past century.

Moreover, the United States contains only 1.9% of the world’s surface area, and the earth’s climate oscillates widely over time and place. Hence, focusing on U.S.-area hurricanes in a single year can easily misinform the issue of climate change.

While Hurricane Irma was razing the Caribbean and barreling toward Florida, climate scientist David Hastings told the Washington Post, “Hurricane Harvey and Irma should resolve any doubt that climate change is real.” Likewise:

In the same vein, FactCheck.org science writer Vanessa Schipani asserted that global warming “makes intense storms like Harvey more likely to occur.” In support of this statement, she declared that:

The claims above paint a distorted picture of reality by ignoring the most relevant and comprehensive facts about this issue.

Contrary to the notion that global warming has caused more rain, the authors of a 2015 paper in the Journal of Hydrology studied rainfall measurements “made at nearly 1,000 stations located in 114 countries” and found “no significant global precipitation change from 1850 to present.” The paper noted that previous studies had analyzed shorter timeframes and found rainfall changes that some people had attributed to global warming, but those results were generally not statistically significant and “not entirely surprising given that precipitation varies considerably over time scales of decades.”

Beyond total rainfall, many climate models predict that global warming will cause the rain to fall in shorter periods, and thus, with more intensity. Yet, even according to the IPCC—which has engaged in deceitful actions to exaggerate global warming—evidence for such an outcome is highly questionable:

This issue becomes even murkier when looking at the bigger picture, because apparent changes in rainfall intensity sometimes vanish when examining longer timeframes that better account for natural variations. For example, the International Journal of Climatology published a paper in 2015 about extreme rainfall in England and Wales that revealed, “Contrary to previous results based on shorter periods, no significant trends of the most intense categories are found between 1931 and 2014.”

A “tropical cyclone” is a circular wind and low-pressure system that develops over warm oceans in the tropics. Cyclones with winds ranging from 39 to 73 miles per hour are called “tropical storms,” and those with winds exceeding 73 miles per hour are called “hurricanes.” Technically, there are different names for cyclones with hurricane-force winds in different areas of the world, but for the sake of simplicity, this article refers to them as hurricanes.

The datasets below, which were originally published in the journal Geophysical Research Letters in 2011, show that the global number and intensity of tropical storms and hurricanes have not increased over the past four decades: 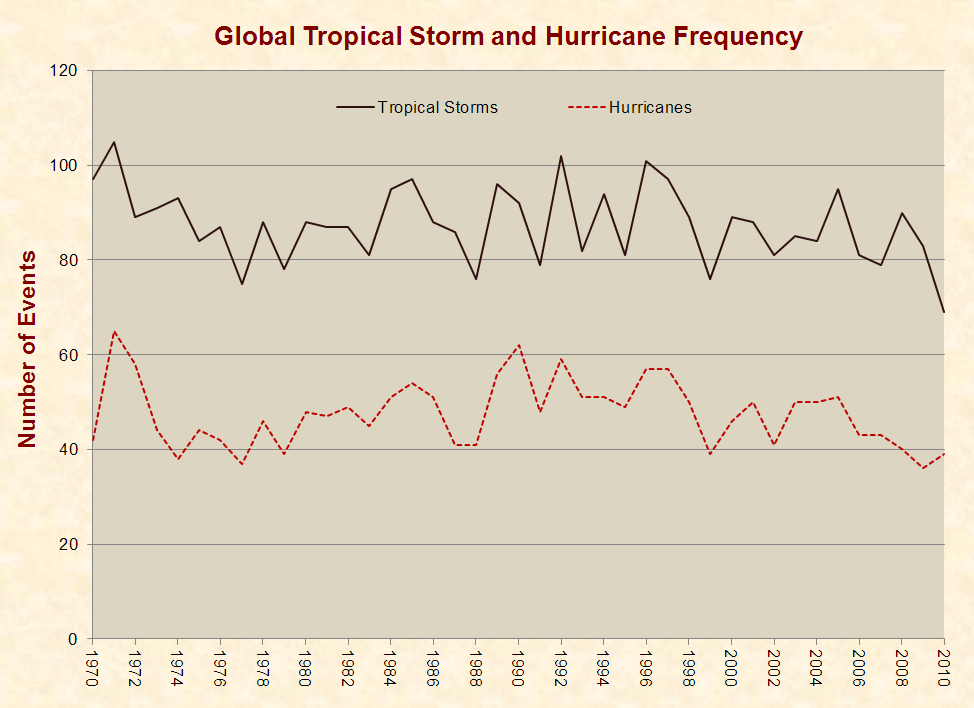 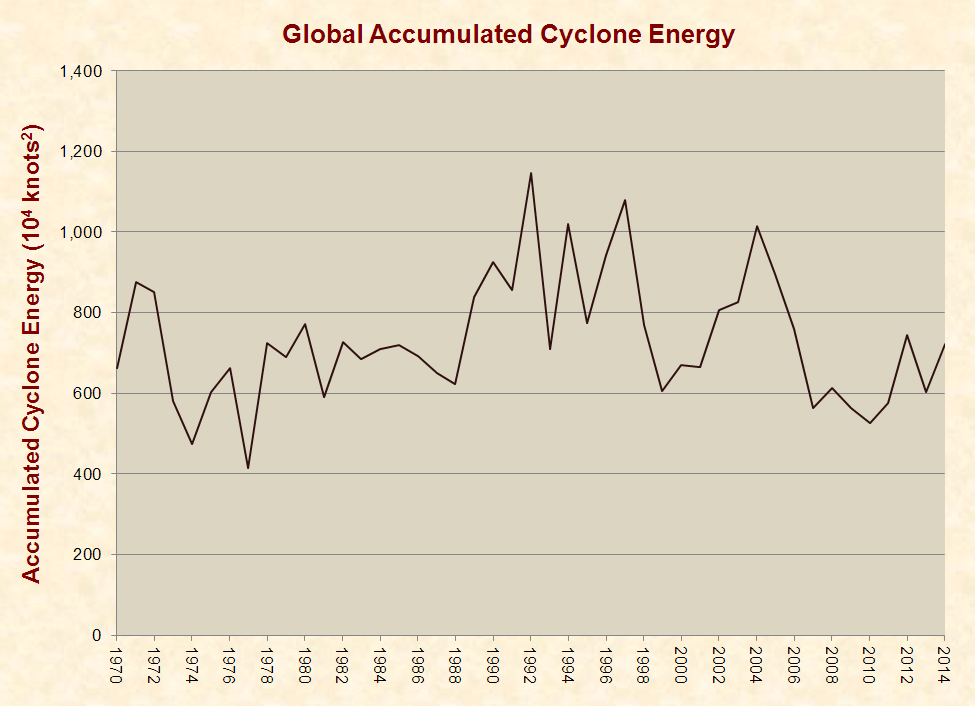 Corroborating this data, the IPCC reported in 2012, “There is low confidence in any observed long-term (i.e., 40 years or more) increases in tropical cyclone activity (i.e., intensity, frequency, duration), after accounting for past changes in observing capabilities.”

In spite of these facts, a national scientific poll commissioned by Just Facts shortly before the 2016 presidential election found that 44% of Trump voters and 77% of Clinton voters believed that the global number and intensity of hurricanes and tropical storms have generally increased over the past 30 years. This sharp disconnect between reality and perception accords with a flood of global warming-related misinformation spread by the media and environmental groups.

In the North Atlantic region, where hurricanes Harvey and Irma formed, tropical storm and hurricane activity have increased significantly over the past four decades. However, this trend fades in the wider context of variation over the past century. As explained by the National Oceanic and Atmospheric Administration (NOAA):

No robust trends in annual numbers of tropical storms, hurricanes and major hurricanes counts have been identified over the past 100 years in the North Atlantic basin.

NOAA states that North Atlantic tropical storms show a “pronounced upward trend” since 1878, but this is because these records are “relatively sparse” in their early decades. After NOAA adjusts for the “estimated number of missing storms,” the trend in storm activity is “not significantly distinguishable from zero.” Furthermore, NOAA notes that the upward trend in the unadjusted data:

is almost entirely due to increases in short-duration (<2 day) storms alone. Such short-lived storms were particularly likely to have been overlooked in the earlier parts of the record, as they would have had less opportunity for chance encounters with ship traffic.

With regard to the most intense storms, NOAA reports that “the reported numbers of hurricanes were sufficiently high during the 1860s-1880s that again there is no significant positive trend in numbers beginning from that era…. This is without any adjustment for ‘missing hurricanes’.”

Even more relevant to the implications of Harvey and Irma, NOAA notes that the record of North Atlantic hurricanes that reach land are “more reliable” than for the entire North Atlantic, and they “show a slight negative trend beginning from 1900 or from the late 1800s.” In other words, the most reliable data shows the opposite of what many media outlets are reporting.

After reviewing the data above, NOAA states, “In short, the historical Atlantic hurricane record does not provide compelling evidence for a substantial greenhouse warming-induced long-term increase.”

Similarly, the very same 2013 IPCC report cherry-picked by FactCheck.org states, “No robust trends in annual numbers of tropical storms, hurricanes and major hurricanes counts have been identified over the past 100 years in the North Atlantic basin.” This is word-for-word the same as stated by NOAA.

Three times in her FactCheck.org article, Schipani used the phrase “scientists say” as if she were citing the universal opinion of scientists. Given the contents of her article, a longer but honest rewording of this phrase would be that “some scientists who have previously misled the public about global warming say so, but some scientists disagree.”

For example, Schipani quoted climate scientist Michael Mann—creator of the notorious hockey stick chart and inventor of a “trick” to “hide the decline“ in temperatures—as though he were an unquestionable authority. Mann claimed that global warming may have caused Hurricane Harvey to stall over Houston and drop a devastating amount of rain in this location. However, Schipani failed to inform her readers that some other climate scientists, like Roy Spencer, disagree with Mann and wrote:

I don’t know of any portion of global warming theory that would explain why Harvey stalled over southeast Texas. Michael Mann’s claim in The Guardian that it’s due to the jet stream being pushed farther north from global warming makes me think he doesn’t actually follow weather like those of us who have actual schooling in meteorology (my degree is a Ph.D. in Meteorology). We didn’t have a warm August in the U.S. pushing the jet stream farther north.

Certain media outlets have linked hurricanes Harvey and Irma to global warming by ignoring wide-ranging facts and cherry-picking timeframes, geographical locations, report contents, and the opinions of scientists. As explained in an academic book about analyzing data, “One of the worst abuses of analytics is to cherry pick results. Cherry pickers tout analysis findings when the results serve the purpose at hand. But, they ignore the findings when the results conflict with the original plan.”

Webster’s College Dictionary defines science as the “systematic knowledge of the physical or material world gained through observation and experimentation.” By this standard, there are no grounds to claim that global warming has increased rainfall or hurricane activity.