Last week, Forecast the Facts, a self-described “grassroots human rights organization dedicated to ensuring that Americans hear the truth about climate change,” published the following picture of the “North Pole” taken on July 22, 2013: 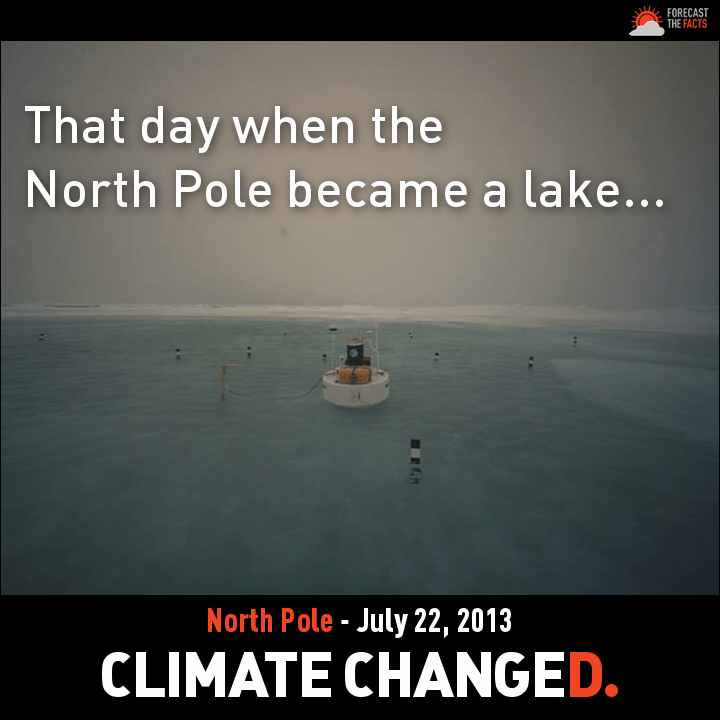 In addition to inserting the text shown above, Forecast the Facts (FtF) publicized this picture by asserting that the “lake” had formed “due to unprecedented melting Arctic sea ice,” and by issuing an appeal on its Facebook page that says, “Let’s make sure this is one for the history books.”

The organization’s Facebook fans and their friends responded by sharing this picture more than 15,000 times—many times more than the New York Times’ 3.3 million Facebook fans share most of its posts. This is even more shares than Barack Obama’s 36 million fans and Lady Gaga’s 58 million give to the majority of their posts.

Despite the enthusiasm for FtF’s post, conditions like those shown in the picture are not “unprecedented.” They have been observed for as long as mankind has had the technology to visit the North Pole in the summer. Furthermore, the picture actually does not show the North Pole but an area that is more than 300 miles from it.

The first individuals to visit the surface of the North Pole region during summer were the crew of the USS Skate, a nuclear submarine that surfaced 40 miles from the North Pole in August of 1958. In the May 4th, 1959 issue of Life magazine, James Calvert, the captain of the Skate, described the ice cover by saying that “we repeatedly found open water where we could surface.”

Likewise, in the June 13, 1963 issue of New Scientist, Dr. Waldo Lyon, a U.S. Navy sonar specialist and onboard scientist for several submarine missions to the Artic and North Pole, described the summertime ice conditions as such: “During the summer, open water spaces appear everywhere between the floes and form holes in the ice canopy through which the submarine can readily reach the surface.”

To wit, below is a picture of the Skate and the USS Seadragon at or very near the North Pole in August of 1962. Several credible sources place this historic meeting of submarines “at the North Pole,” but odds are they were at least a few miles away. Just Facts has requested the exact coordinates from the Naval History & Heritage Command and is awaiting a response. 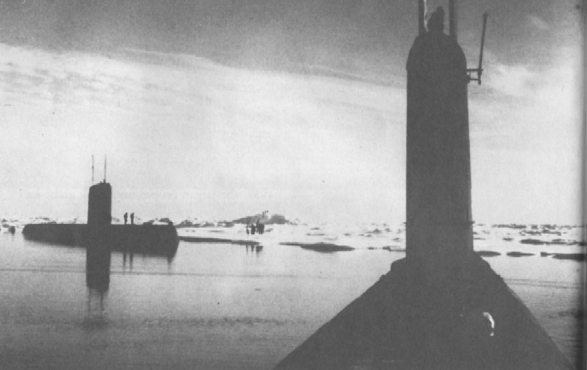 Beyond the fact that the picture touted by FtF as “one for the history books” is nothing out of the ordinary, the organization offered no documentation for the picture. Just Facts was able to locate it among the webcam archives of the North Pole Environmental Observatory at the University of Washington.

Per correspondence with the observatory, the relevant webcam is installed on “PAWS Buoy 819920.” The tracking data for this buoy shows that the picture was taken while it was located at a latitude of 84.838°N, which is 310 nautical miles or 356 miles from the North Pole. This is about the latitudinal distance between Washington, DC and Brunswick, Maine.

Along with FtF, a number of media outlets have promoted this story or published others in the same vein:

• Huffington Post: “North Pole Melting Leaves Small Lake At The Top Of The World”
• Huffington Post Facebook page: “Now THIS is a wakeup call!”
• Newsmax: “Lake Forms as Ice Melts at the Top of the World”
• Common Dreams: “The Scariest Lake in the World Sits at the North Pole”
• New York Post: “North Pole is now a lake”
• Daily Kos Facebook page: “Global warming pollution has melted the Arctic and created a lake at the top of the North Pole sea ice.”
• Forbes: “Melting Polar Ice Cap Created A Lake On Top Of The World”
• Relevant magazine: “[A]t some point, temperatures at the North Pole got balmy enough to create a lake where there should be a brick of frozen ice.”
• Yahoo News: “In what has now become an annual occurrence, the North Pole’s ice has melted, turning the Earth’s most northern point into a lake.”
• Toronto Star: “Startling images show melting North Pole turning into a lake.”

Most of these stories avoid the explicit falsehoods of FtF, but none of them explain that such conditions have prevailed for at least half a century and possibly much longer.

Interestingly, the New York Times and other media outlets made a very similar error 13 years ago. In the summer of 2000, James J. McCarthy, a Harvard oceanographer, co-chair for Intergovernmental Panel on Climate Change, and a lead author for the Arctic Climate Impact Assessment, was serving as a guest lecturer on an Arctic tourist cruise. The cruise ship encountered an area of open ocean at the North Pole, and McCarthy informed the New York Times, which ran a front-page story claiming that:

• “an ice-free patch of ocean about a mile wide has opened at the very top of the world, something that has presumably never before been seen by humans….”
• the “last time scientists can be certain the pole was awash in water was more than 50 million years ago.”
• this “is more evidence that global warming may be real and already affecting climate.”

The next day, the London Times published an article stating that “a leading British Arctic scientist said that the emergence of ice-free areas was nothing new and that it had been happening for thousands of years.” The scientist, Dr. Peter Wadhams, director of the Scott Polar Institute in Cambridge, stated, “Claims that the North Pole is now ice-free for the first time in 50 million years [are] complete rubbish, absolute nonsense.”

• the original article “misstated the normal conditions of the sea ice” at the North Pole.
• a “clear spot has probably opened at the pole before….”
• 10% of the “high Arctic region” is “clear of ice in a typical summer.”
• “The lack of ice at the pole is not necessarily related to global warming.”

It remains to be seen whether the latest purveyors of this misinformation will issue a correction like the Times.