In keeping with that storyline, a recent Washington Post article about higher education reports:

To the alarm of many educators, nearly every state has cut funding to public colleges and universities since the 2008 financial crisis. Adjusted for inflation, states spent $5.7 billion less on public higher education last year than in 2008, even though they were educating more than 800,000 additional students, according to the State Higher Education Executive Officers Association.

The Post limited its field of view to state funding of public colleges and universities, but a broader outlook reveals a very different picture.

Historically, states have provided most of the money for higher education, “65 percent more than the federal government on average from 1987 to 2012,” according to an analysis by the Pew Charitable Trusts.

Support takes different forms, with federal money mainly going toward assisting students and specific research projects, while state dollars usually fund general operations. But after the Great Recession began in 2007, as states were struggling to keep spending in line with decreased tax revenue, the federal share increased to the point where it exceeded what states were contributing.

While the Post directs attention to state reductions totaling $5.7 billion from 2008 to 2016, it fails to reveal the other side of the coin relayed by Pew: Federal “Pell Grant program and veterans’ educational benefits … surged by $13.2 billion (72 percent) and $8.4 billion (225 percent), respectively, in real terms from 2008 to 2013.” In short, increases in federal spending were much greater than decreases in state spending.

Examining the full picture, data from the U.S. Bureau of Economic Analysis and the U.S. Department of Education show that inflation-adjusted government spending on higher education increased by 23% from 2008 to 2016, hitting a record high of $183 billion in 2016. On a per-student basis in the same period, this spending increased by 16% and also reached an all-time high of more than $9,000 per student: 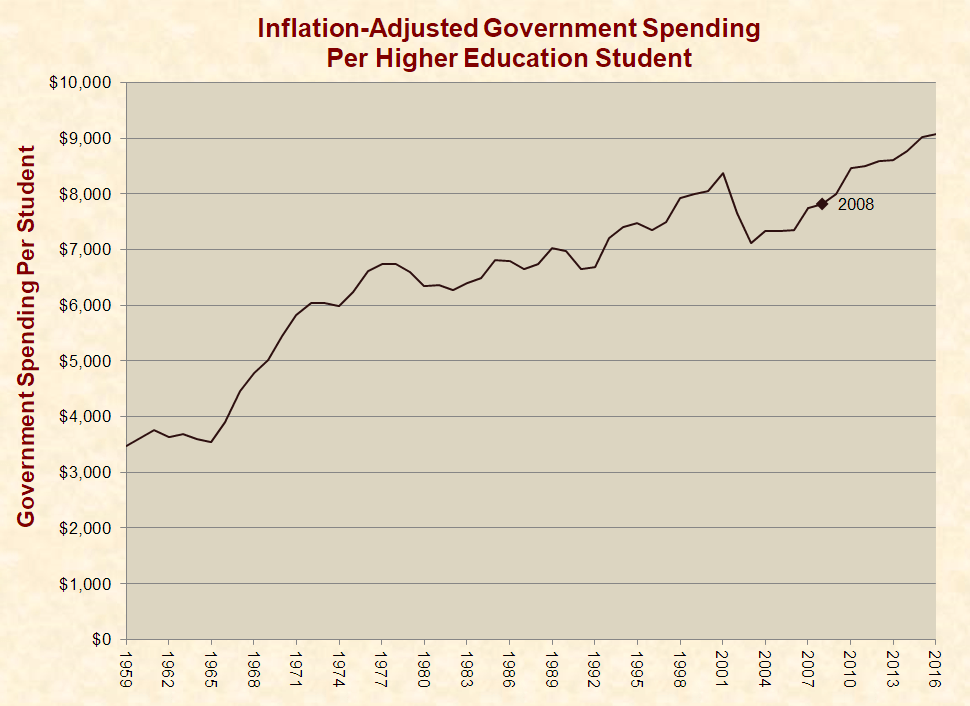 The same Washington Post article states that “educators fear the drop in government spending is making schools harder to afford for low- and middle-income students.” Yet, such funding has actually increased by substantial amounts.

Beyond the issue of government funding, this Post article focuses on the differing viewpoints of Democrats and Republicans about higher education. It begins by quoting Frank Antenori, a Trump-supporting, former Green Beret who says:

Why does a kid go to a major university these days? A lot of Republicans would say they go there to get brainwashed and learn how to become activists and basically go out in the world and cause trouble. …

You want to create someone who’s going to be a contributor, not a moocher. Go out and generate revenue; that’s what it’s all about.”

As a foil to Antenori, the Post quotes Democrat Steve Farley, an Arizona state senator and candidate for governor, who says:

Government should be run like a family. We should be raising our children to be the best people they can be. We should not be manufacturing them to be products to be consumed. That is a basic ethical and moral flaw in this whole argument, that everything’s got to have financial payback so we can reduce taxes for the Koch brothers. …

Public education at every level is the only tool we’ve ever invented to effectively allow people to lift themselves from poverty. In Arizona, one in four children live in poverty right now. If you take away that tool there is no hope for our future—none.

The Post accurately notes that Americans’ opinions on these topics have become sharply divided along political lines. A 2017 national survey of 2,504 people by Pew Research asked if colleges and universities have a positive or negative “effect on the way things are going in the country.” With margins of sampling error ranging from 3 to 4 percentage points, the poll found that:

The Post uncritically quotes Farley saying that “the whole liberal bastion idea is just absurd,” but that claim is belied by a study published by Econ Journal Watch in 2016. This study examined the “Democratic-to-Republican voter registration ratios among faculty in five fields (Economics, History, Journalism/Communications, Law, and Psychology) at 40 leading universities.” It found that 54% of these professors were registered as Democrats or Republicans, and among them, the ratio of Democrats to Republicans for:

The True Value of a Diploma

The core of the Post’s article is about the value of higher education, but it is nearly devoid of facts that inform this debate. Instead, it mainly presents dueling opinions on this issue sprinkled with half-truths about government funding and some accurate data about college costs. While this is a very wide-ranging subject, the following facts provide a broad overview of it.

First, higher levels of education are associated with higher earnings. In 2015, U.S. residents aged 25 and older with only a high school degree had 56% less cash earnings than those with a bachelor’s degree. However, this association may be caused in large part by factors that are related to education but not necessarily caused by education. Individuals with high intelligence and discipline tend to excel in education and obtain more of it, but they also tend to earn more money regardless of their education. Hence, the higher earnings of college grads may be caused by factors beyond their education.

Likewise, Princeton University Press just published a book by Bryan Caplan entitled The Case Against Education: Why the Education System Is a Waste of Time and Money. The title is surprising given that Caplan is a graduate of Berkeley, earned a Ph.D. at Princeton, and is a long-time professor of economics at George Mason University. As he describes it, he’s been “in school” for more than 40 years. He explains in the book’s introduction:

Personally, then, I have no reason to lash out at the education system. Quite the contrary. Yet a lifetime of experience, plus a quarter century of reading and reflection, convince me that our education system is a big waste of time and money. Almost every politician vows to spend more on education. As an insider, I can’t help gasping, “Why? You want us to waste even more?”

He goes on to say what many college graduates already know: “Typical students burn thousands of hours studying material that neither raises their productivity nor enriches their lives.”

Caplan argues that a diploma is primarily valuable because it “signals” to potential employers that graduates have certain levels of intelligence, ambition, willingness to follow instructions, and ability to tolerate boredom, which is an element of many jobs. After 20 years as a college professor, he estimates that at least a third and “more like 80%” of a student’s time is spent doing work that only amounts to “signaling” as opposed to acquiring useful job skills.

In 2014, Professor Richard Arum of New York University and Assistant Professor Josipa Roksa of the University of Virginia published a study using the Collegiate Learning Assessment to measure the “critical thinking, complex reasoning, and writing skills” of 1,666 full-time students who entered 4-year colleges in the fall of 2005 and graduated in the spring of 2009. The authors found that if the test “were rescaled to a one-hundred-point scale, approximately one-third of students would not improve more than one point over four years of college.”

College students are also devoting significantly fewer hours to academics than in years past. Between 1961 and 2003, the average time spent by full-time college students on educational activities such as attending class and studying dropped from roughly 40 hours per week to 27.

A 2007 Association of American Colleges and Universities poll of 301 employers who hire people with bachelor’s degrees assessed their views of recent college graduates. On a scale of 1–10, in “none of the 12 areas tested does a majority of employers give college graduates a high rating (or ‘8,’ ‘9,’ or ‘10’) for their level of preparedness.”

In 2017, the U.S. Government Accountability Office found that over the past 20 years an increasing number of college graduates are earning low hourly wages:

Our estimates showed that the percentage of workers earning $12.01 to $16 per hour with college degrees increased from 16 percent in 1995 to 22 percent in 2016. A similar trend occurred in the other low-wage categories.

Looking at recent college grads overall, 43% are underemployed, according to an analysis of U.S. Census data by the Federal Reserve Bank of New York.

The rate of underemployment varies by what students chose to study. Topping the list are majors such as criminal justice at 76%, public policy and law at 66%, performing arts at 66%, leisure and hospitality at 64%, and anthropology at 61%. Times are especially hard for anthropology majors, given that 48% of them hold a graduate degree.

These underemployment figures might lead parents to urge their young scholars to more carefully choose their field of study, but a look at other majors with less underemployment is still troubling: The rate of underemployment for computer science majors is 26%, pharmacy 27%, architecture 29%, and journalism 42%.

A broad view of higher education funding and value underscores these key points: