Shortly before he was sworn in as the governor of New Jersey, Democrat Phil Murphy, a former Goldman Sachs executive, said:

This state, under the current leadership, has gotten into the belief that if I give something to you, it comes at my expense. That’s a myth. Raising the minimum wage does not take from growth, it adds to growth. Earned sick leave gives workers a lot more confidence and adds to their participation in the economy.

Those claims are naive and potentially harmful to workers, because wide-ranging facts show that when governments force employers to provide benefits, the costs of those benefits mainly come out of workers’ paychecks.

One of the clearest and strongest proofs of this comes from a long period of employee benefit growth. As explained by the U.S. Department of Labor, “In the final four decades of the 20th century, employee compensation” underwent “dramatic shifts” from cash wages to benefits. Specifically, wages declined from 91% of total employee compensation in 1959 to only 78% in 1998. The rest went to benefits, or “non-wage items that generally provide time off, insurance protection, and retirement security.” The Department of Labor also notes that many of these added benefits were “legally required” by government.

Yet, during this era of rapid benefit growth, workers’ inflation-adjusted hourly compensation—including both benefits and cash—grew in lockstep with labor productivity, or the amount of goods and/or services that workers produce in an hour: 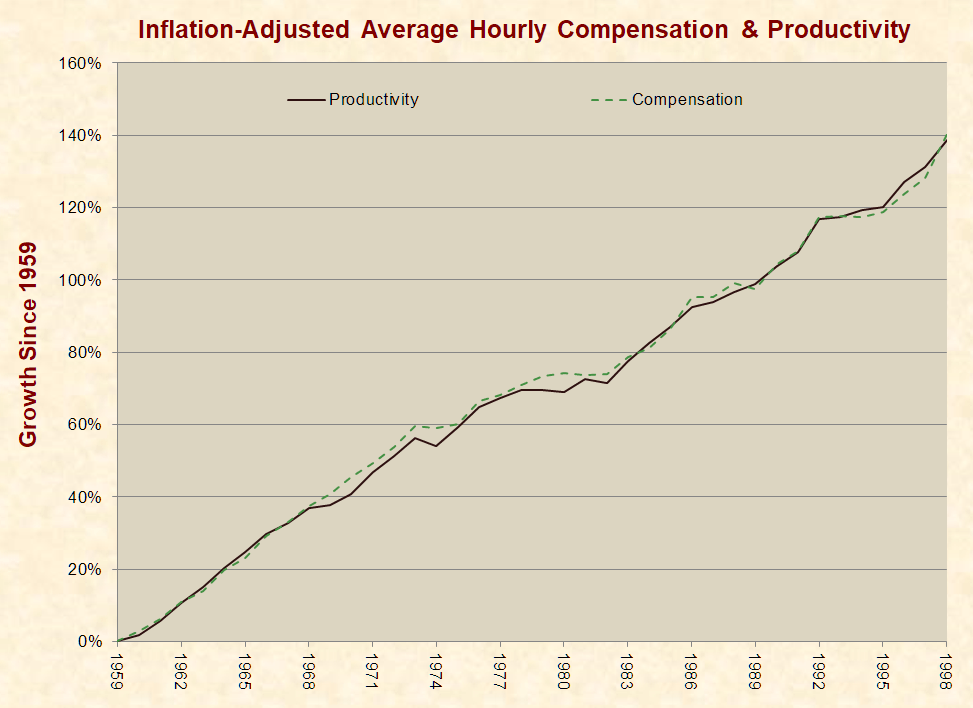 This data shows—in no uncertain terms—that the benefits gained by employees came at the expense of their cash wages. If this were not the case, these sharp benefit increases would have caused compensation to rise faster than productivity. The reason why this did not occur is a matter of straightforward economics. Employers generally cannot compensate workers much:

By and large, employee compensation is not determined by the generosity or cheapness of employers but by market forces that reward workers for their productivity. Per an economics textbook published by Cambridge University Press:

Many businessmen would no doubt like to pay their employees only half of what they add to their firm’s profitability. But employers would then face pressure from other businessmen who see extra profits for themselves if they hire the first firm’s employees and pay them a little more but still less than their productivity warrants. And the new employers in turn face pressure from firms willing to pay a little more still.

In accord with these facts, government agencies explicitly state that employment taxes levied on businesses drive down employee wages. For example, federal law requires employers to pay half of the Social Security and Medicare payroll taxes due for each person they employ. However, as the U.S. Government Accountability Office explains, “While employees and employers pay equal amounts in social insurance taxes, economists generally agree that employees bear the entire burden of social insurance taxes in the form of reduced wages.” Similarly, the Congressional Budget Office notes that “the employers’ share of payroll taxes is passed on to employees in the form of lower wages.”

Causing the Problem They Condemn

A common talking point among left-leaning politicians is that workers’ wages have not kept pace with gains in productivity over the past four decades. They claim this is proof that the job market is unfair, and therefore, voters should elect them to solve the problem. Elizabeth Warren, Bernie Sanders, and Hillary Clinton have all made such arguments.

However, those same individuals support government policies that force businesses to provide more employee benefits. Since this represses wages, it causes the very problem they decry. In the words of Martin Feldstein, professor of economics at Harvard University and president emeritus of the National Bureau of Economic Research:

The other “mistake” detailed by Feldstein is a “misleading” use of data. The analysts do this by using “two different” methods to adjust for inflation, one for compensation, and the other for productivity.

When adjusted for inflation using the same method, average labor productivity and hourly compensation have increased at the same rate for all of modern U.S. history except for a passing two-year blip during the presidency of George W. Bush and during the presidency of Barack Obama when massive government interventions like quantitative easing distorted the nation’s economy: 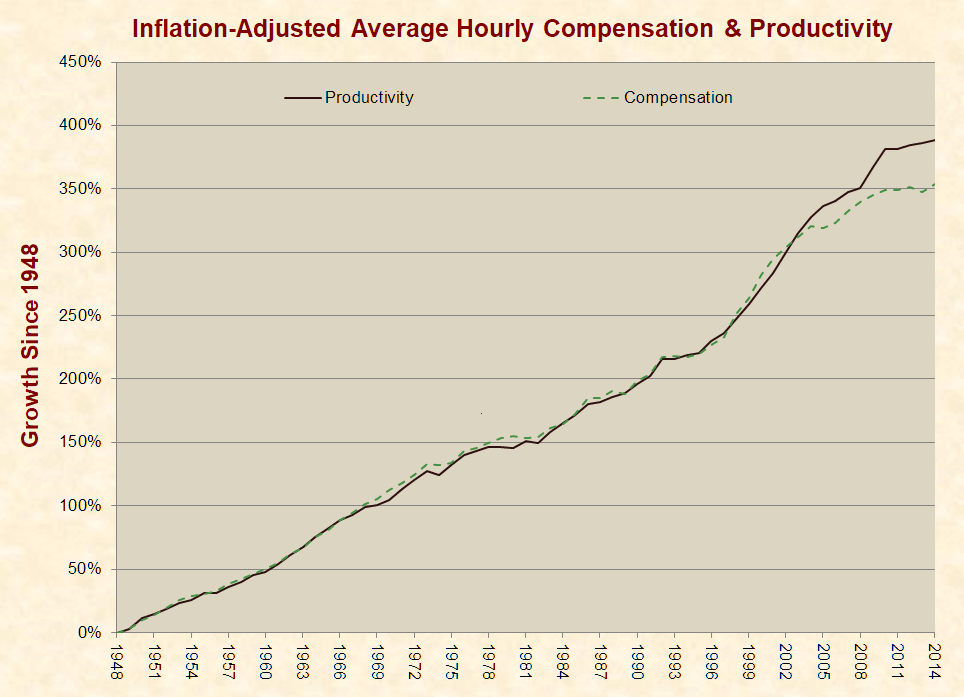 Phil Murphy says that employee benefits like sick leave don’t cost anything, but more than half a century of data on employee compensation and productivity shows that such benefits suppress workers’ wages. Federal government agencies that specialize in economics confirm this is the case.

Furthermore, Murphy’s claims is at odds with one of the most basic laws of economics: There is no such thing as a free lunch. The prolific economist William A. McEachern explains why this is so: