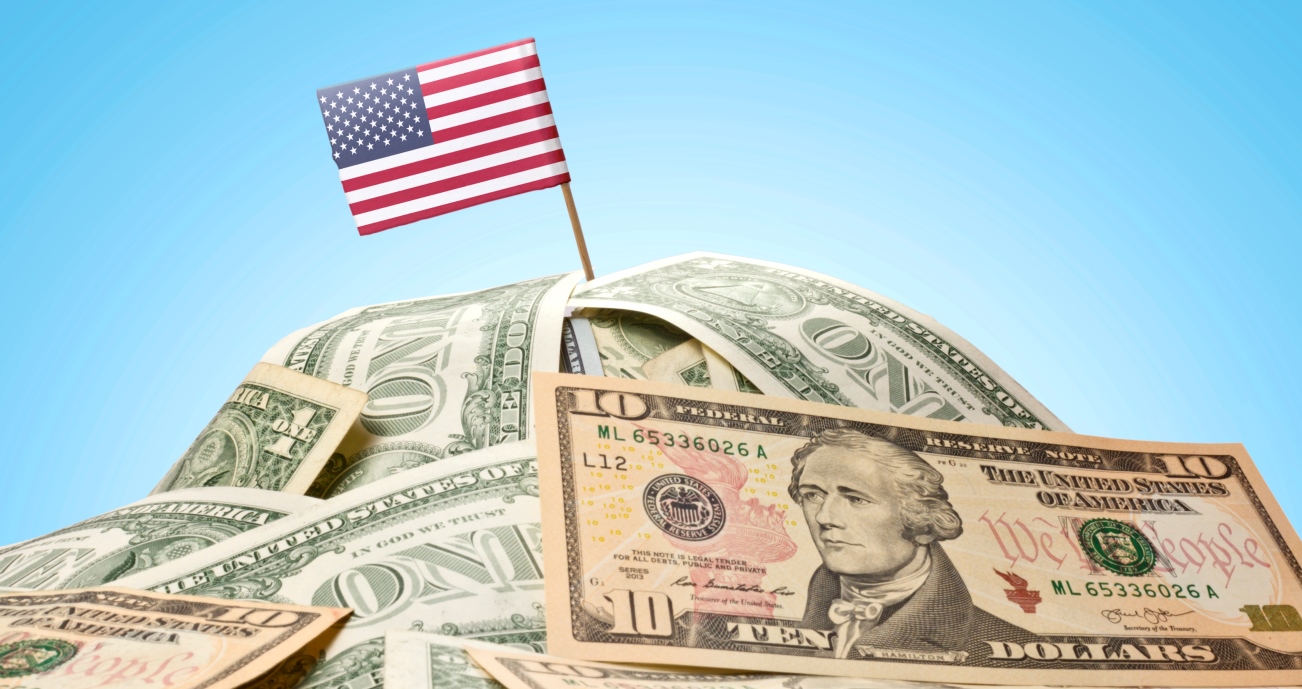 The U.S. Treasury has published a major report revealing that the federal government has amassed $124.1 trillion in debts, liabilities, and unfunded obligations. To place this shortfall in perspective, it equates to:

The new data reflect the government’s finances at the close of its 2021 fiscal year on September 30, 2021. Unlike other estimates of the federal government’s red ink which extend into the infinite future, the figure of $124.1 trillion only includes Americans who are alive right now. Thus, it measures the financial burden that today’s Americans are placing on future generations.

Officially called the “Financial Report of the United States Government,” this 258-page publication is mandated by a federal law which requires the Treasury and White House to produce a full accounting of the government’s “overall financial position” each year. Beyond the national debt, this also includes the government’s explicit and implicit commitments. This methodology approximates the accounting standards that the federal government imposes on publicly traded corporations.

Although the report discloses information of crucial import to the citizens of the United States, Google News indicates that no major media outlet has informed anyone about it since it was released on February 17, 2022.

As explained in the report, the federal government’s budget is “prepared primarily on a ‘cash basis’.” This is an incomplete measure of its finances because cash accounting is the simplistic process of counting money as it flows in or out. For example, cash accounting ignores the pension benefits promised to federal workers until these benefits are actually paid, which is often years or decades after they are promised.

The federal government requires large corporations to use accrual accounting for their pension plans because this is the “most relevant and reliable” way to measure their financial health. The same applies to other retirement benefits like healthcare. The official statement of this rule explains that “a failure to accrue” implies “that no obligation exists prior to the payment of benefits.” Since an obligation does exist, failing to account for it “impairs the usefulness and integrity” of financial statements.

Nevertheless, the media and politicians routinely cite the federal budget and national debt, while ignoring the far more comprehensive and bleaker data from this Treasury report.

The differences between the federal budget and the broader Treasury data have major consequences for future taxpayers, partly because pension and other retirement benefits are a large part of the compensation packages for government employees. When these benefits are included, civilian non-postal federal employees receive an average of 17% more total compensation than private-sector workers with comparable education and work experience. Postal workers receive even greater premiums ranging from 25% to 43%.

In 2020, federal, state, and local governments spent $2.13 trillion on employee compensation, which amounts to an average cost of $16,556 for every household in the United States.

The Treasury report shows that the federal government currently owes $10.2 trillion in pensions and other benefits to federal employees and veterans. To pay the present value of these benefits will require an average of $78,372 from every household in the United States.

A similar situation exists with social insurance programs like Social Security and Medicare because, contrary to popular belief, these programs don’t save workers’ tax payments for their retirements. Instead, they immediately spend the vast majority of those taxes to pay benefits to current recipients. Thus, they are called “pay-as-you-go” programs.

In stark contrast, the U.S. Bureau of Economic Analysis states that “federal law requires that private pension plans operate as funded plans, not as pay-as-you-go plans.” The reasons for this, as explained by the American Academy of Actuaries, are to increase “benefit security” and ensure “intergenerational equity.” Social Security and Medicare, on the other hand, have levied increasing tax burdens on succeeding generations of Americans and have accumulated trillions of dollars in unfunded obligations.

In the words of Harvard Law School professor and federal budget specialist Howell E. Jackson, the closed-group measure “reflects the financial burden or liability being passed on to future generations.” These burdens are $43.2 trillion for Social Security and $47.8 trillion for Medicare. To place these figures in context:

Yet, the program is still facing insolvency, mainly because the ratio of workers paying taxes to people receiving benefits has fallen by 47% since 1960 and is projected to fall further.

Beyond the national debt, federal employee retirement benefits, and Social Security and Medicare shortfalls—the Treasury details other obligations of the federal government. These, include, for example:

The report, however, doesn’t account for federal stewardship land and heritage assets, such as national parks and the original copy of the Declaration of Independence. While these items have tangible value, the report explains that they “are intended to be preserved as national treasures,” not sold to the highest bidder to cover debts.

In total, the government owned $4.9 trillion in commercial assets at the close of its 2021 fiscal year.

Adding up the federal government’s debts, liabilities, and unfunded obligations and then subtracting the value of its commercial assets yields a fiscal shortfall of $124.1 trillion.

Moreover, the actual figure may be significantly worse because the Treasury’s data is based on federal agency assumptions that are optimistic in these respects:

In 2013, CBO ran a long-term projection of the publicly held debt, a partial measure of the national debt often cited by federal agencies and media outlets. This projection was unique in that it estimated what would occur under current federal policies and their economic effects, as opposed to other CBO projections that use unrealistic assumptions and budget gimmicks.

CBO’s 2013 projection estimated that the debt would grow over the next two decades to unprecedented levels unless the government changed course. Nine years later, the actual outcomes have been far worse, mainly due to more than $5 trillion in spending on “Covid relief” laws: 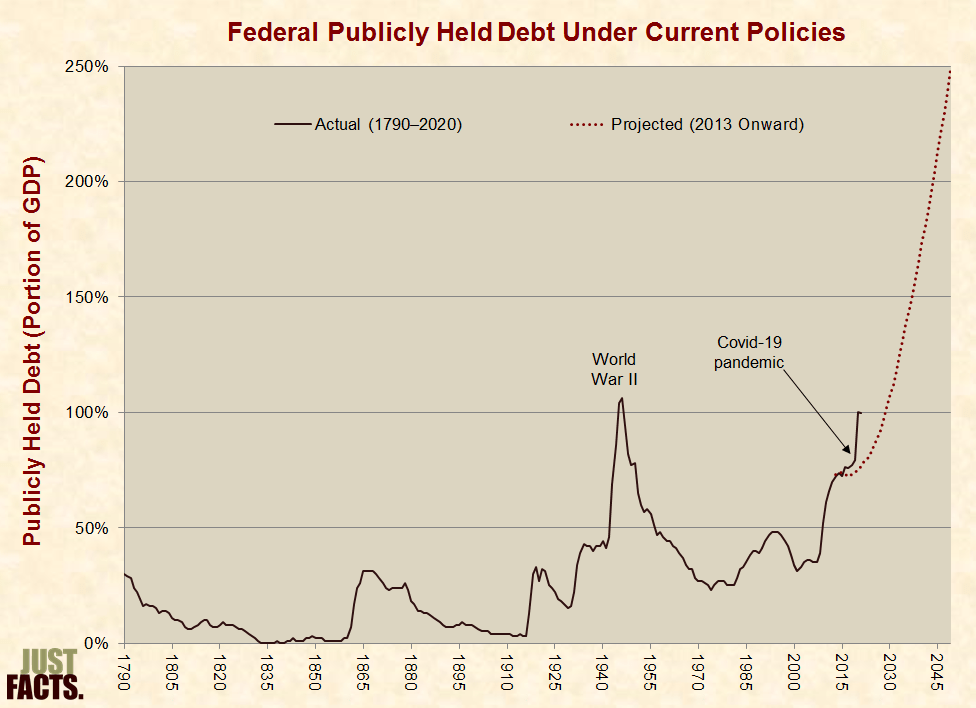 Contrary to the media narrative that tax cuts and military spending are to blame for the runaway national debt, the primary cause is greater spending on social programs which provide healthcare, income security, education, nutrition, housing, and cultural services. These programs have grown from 21% of all federal spending in 1960 to 73% in 2020: 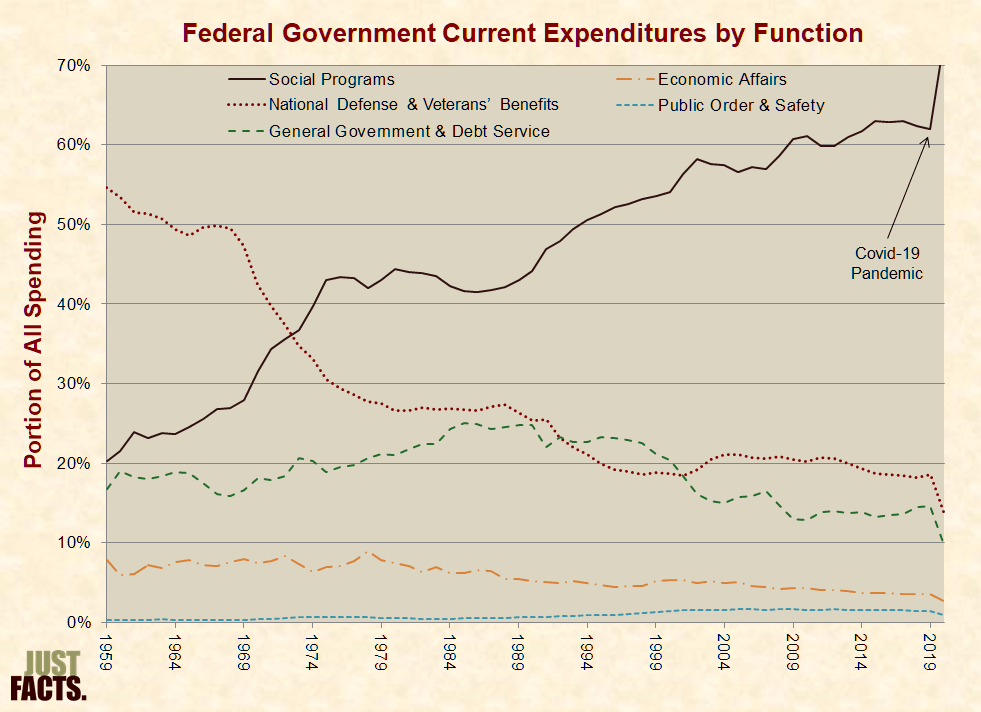 Under current laws and policies, CBO projects that almost all future growth in spending will be due to social programs and interest on the national debt.

Such effects may have already begun. Although association does not prove causation, the national debt has risen dramatically over past decades, and with this, the U.S. has experienced episodes of historically poor growth in gross domestic product, productivity, and household income. Along with this, rapid inflation has set in, another common consequence of excessive government debt.

While some believe the U.S. government can spend and borrow with abandon because it can print money, one of the most established laws of economics is that there is no such thing as a free lunch. The prolific economist William A. McEachern explains why this is so: