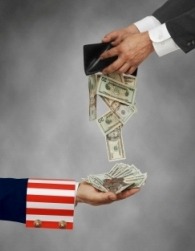 The Obama campaign is airing a new commercial that declares: “You work hard—stretch every penny—but chances are you pay a higher tax rate than him. Mitt Romney made 20 million dollars in 2010 but paid only 14 percent in taxes—probably less than you.” These figures come from Romney’s federal tax return.

FactCheck insists that “the ad is accurate” if “you include a combination of income taxes and payroll taxes — which make up the bulk of federal taxes for most taxpayers.” That conclusion is fatally flawed because it excludes the burden of corporate income taxes, which artificially and substantially decreases Romney’s tax rate. FactCheck then compounds this error by excluding a broad portion of the public’s sources of income, which artificially increases their tax rates.

In contrast, a comprehensive analysis that accounts for nearly all federal taxes and sources of income was conducted in May by Just Facts and two CPAs with the national accounting firm Ceterus. This analysis found that “Romney’s federal tax rate is somewhere in the range of 29% to 82% higher than middle-class Americans, who in turn, pay appreciably higher tax rates than those with lower incomes.”

These figures were based upon a comparison of Romney’s 2010 tax return and the latest Congressional Budget Office (CBO) data on tax distribution, which at the time, only extended through 2007. Last month, however, CBO published data for 2008 and 2009, which shows a sizable drop in tax rates because of the recession and legislation that was enacted in its wake. CBO also adopted a new method to measure the burden of corporate income taxes, which happens to approximate the approach taken by Just Facts and the Ceterus CPAs. Based upon this latest data and method, Romney’s federal tax rate is actually twice that of the middle class.

Specifically, CBO found that households in the middle 20% of the U.S. income distribution paid an effective federal tax rate of 11.1% in 2009. Using CBO’s new estimate for allocating the burden of corporate income taxes, Just Facts and Ceterus calculate that Romney’s federal tax rate was 23.3% in 2010, which is twice the middle-income tax rate in 2009.

The author of the FactCheck analysis, Robert Farley, acknowledges the existence of corporate income taxes but makes no attempt to calculate this burden for Romney, even though these taxes comprise a significant portion of the tax burden for wealthy investors and business owners. In stark contrast, Farley accounts for the burden of corporate payroll taxes, which fall more heavily on middle-income than upper-income individuals.

As detailed in the earlier analysis by Just Facts and Ceterus, corporate income tax burdens depend upon several variables that are subject to uncertainty, and the key one is how much of this tax falls upon stockholders. Up until this latest report, CBO assumed that stockholders bore 100% of this burden. However, “CBO has reevaluated the research on that topic” and now “allocates 75 percent of the federal corporate income tax to” stockholders.

Just Facts and Ceterus accounted for the uncertainty of this key variable by using values ranging from 33% to 100%, which were determined by researching a wide array of academic literature. CBO’s new figure of 75% falls roughly in the middle of this range.

Again, using CBO’s 75% figure to calculate Romney’s 2010 tax burden yields a rate of 23.3%, which is about twice CBO’s 2009 tax rate for middle-income households. Using the full range of values determined by Just Facts yields tax rates for Romney that extend from 18.3% to 26.0%, which are 1.6 to 2.3 times higher than the 2009 middle-income tax rate. Hence, regardless of what the exact figure may be, Romney pays a much higher tax rate than most Americans.

In addition to failing to account for Romney’s corporate tax burden, Farley measures the income of the middle class in a way that skews his analysis even further. When selecting a denominator to calculate the middle-class tax burden, Farley uses adjusted gross income. This is highly problematic, for in the words of the Tax Policy Center, which is Farley’s primary source for his analysis:

By using this narrow measure of income, Farley overstates middle-class tax rates by at least 23%. To be fair, Just Facts and the Ceterus CPAs made a similar error in the initial analysis of Romney’s taxes, but this error overstated Romney’s effective tax rate by less than 1%.

The calculation of Romney’s tax burden is available in this Excel file. A graph and breakdown of federal tax burdens by income can be found in Just Facts’ research on the national debt.

James D. Agresti is the president of Just Facts, a nonprofit institute dedicated to researching and publishing verifiable facts about public policy. Anna Harrington is a CPA with Ceterus, Inc., a leading provider of outsourced accounting services across the United States.