In stark contrast to a CBS News report declaring that Mitt Romney pays a “lower tax rate than most Americans,” a detailed analysis conducted by Just Facts and the accounting firm Ceterus has found just the opposite to be true. Romney’s federal tax rate is somewhere in the range of 29% to 82% higher than middle-class Americans, who in turn, pay appreciably higher tax rates than those with lower incomes.

a far lower [tax] rate than the average American paid, as his fortune is mainly based on investment and not salaried income.

AFP makes this claim without even citing the tax rate paid by average Americans, and the CBS News story suffers from the same flaw. In reality, the 13.9% rate calculated from Romney’s tax return is very close to the federal tax burden for middle-class households, which is 14.3%. This figure comes from the Congressional Budget Office’s (CBO’s) most recent estimates of effective federal tax rates, which show that in 2007, households in the middle 20% of the U.S. income distribution earned an average of $64,500 and paid 14.3% of this in federal taxes.

However, the 13.9% tax rate calculated from Romney’s tax return cannot be used to draw an apples-to-apples comparison with CBO’s estimate of a 14.3% tax rate for middle-class Americans. This is because CBO’s estimate also includes the burden of certain hidden taxes that don’t appear on Romney’s personal tax return.

Hidden taxes are primarily comprised of excise taxes (which are built into the prices of products like gas and alcohol) and corporate taxes (which are disbursed by corporations but are ultimately borne by stockholders, employees, and consumers). As the CBO has explained, “the ultimate cost of a tax or fee is not necessarily borne by the entity that writes the check to the government.” Thus, CBO accounts for these hidden taxes in their estimates of effective tax burdens.

Since the 13.9% rate for Romney is based only upon his personal tax return and excludes the hidden taxes that he paid, drawing an accurate comparison with the CBO data requires accounting for Romney’s excise and corporate taxes. A simple approximation of these taxes can be made as follows:

• Excise taxes: CBO estimates that households in the upper 1% of income only pay about 0.1% of their income in excise taxes. (Because excise taxes are levied on goods and services, they are typically a very small portion of high earners’ incomes.)
• Corporate payroll taxes: Romney is self-employed, and hence, his corporate payroll taxes are shown on his personal tax return under his self-employment taxes.
• Corporate income taxes: CBO estimates that the upper 1% of income earners pay an average of 8.8% in corporate income taxes.

Tallying the data above indicates that Romney’s federal tax rate is 22.8% (13.9% + 0.1% + 8.8%), which is 60% higher than middle-class Americans. This figure, however, should be fine-tuned because Romney’s income is in an upper tier of the upper 1% and because CBO makes some simplifying assumptions about corporate taxes that can be more accurately estimated by examining Romney’s tax return.

The complexities of the U.S. tax code make it practically impossible to determine Romney’s exact tax burden. Even CBO’s estimates are based on suppositions that leave room for uncertainty. Nonetheless, a comprehensive estimate based upon known facts is presented below.

First, Romney’s excise tax rate is probably close to zero. Per the CBO, “The effect of excise taxes, relative to income, is greatest for lower-income households, which tend to spend a greater proportion of their income on such goods as gasoline, alcohol, and tobacco, which are subject to excise taxes.” Given that the upper 1% of income earners made an average of $1.9 million in 2007 while paying a 0.1% excise tax rate, the rate on Romney’s earnings of $21.6 million should be vanishingly small.

Thus, each investor’s corporate income tax burden is dependent upon the nature of his or her portfolio and the portion of corporate income tax borne by stockholders. Estimates for this last variable range from nearly 100% down to 33%. For a 1998 survey published in the Journal of Economic Literature, researchers asked economists at leading U.S. universities to estimate the “percentage of the current corporate income tax in the United States that is ultimately borne by capital.” The median response was 40%.

Based upon the facts above and the details of Romney’s personal tax return, Just Facts and Ceterus calculate that Romney paid somewhere between 18.4% and 26.0% of his 2010 income in federal taxes (Excel file). This amounts to a 29% to 83% higher rate than CBO’s equivalent figure for middle-class Americans. 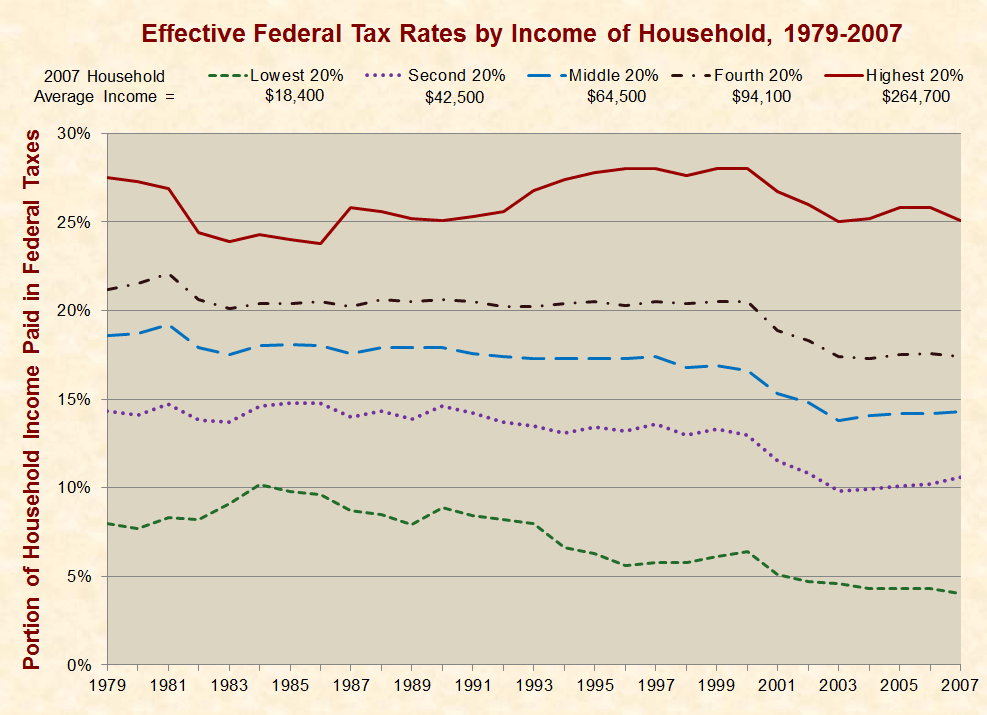 James D. Agresti is the president of Just Facts, a nonprofit institute dedicated to researching and publishing verifiable facts about public policy. Levi Morehouse and Anna Harrington are CPAs with Ceterus, Inc., a leading provider of outsourced accounting services across the United States.