On January 30th, the U.S. Bureau of Economic Analysis (BEA) issued a preliminary report stating that gross domestic product (GDP) decreased by 0.1% in the fourth quarter of 2012. The report emphasized that this is an “advance estimate … based on source data that are incomplete or subject to further revision….” The report also stated that the decrease in GDP “reflected negative contributions from private inventory investment, federal government spending, and exports….”

Seizing upon the “federal government spending” aspect of this report, some journalists, commentators and organizations have claimed that reduced government spending is dragging down the economy. This was the focal point of a combative exchange on CNBC between on-air editor Rick Santelli and senior economics reporter Steve Liesman. Attributing the decline in GDP to left-leaning government policies, Santelli stated, “When you act like Europe, you get growth rates like Europe, and our discussions with economists sounds like we’re in Europe!” To which Liesman shot back, “We reduced government spending by 15 percent! That’s not Europe!”

The BEA report in question estimates that “government spending” declined by 15% in the fourth quarter of 2012, consisting of a 22% decline in national defense, a 1% increase in other federal spending, and 1% decrease in state and local spending. Again, these figures are preliminary, they only apply to selected categories of government spending, and real total government expenditures actually increased by 1%.

Hence, if one were to draw a simplistic conclusion from this data (as reporters and analysts have done), an accurate assessment would be that increased overall government spending—with more spending on social programs and less on national defense—accompanied the decline in GDP.

It is important to note that the above-cited figures are comparisons between the third and fourth quarters of 2012, and quarterly figures on government spending tend to fluctuate. Thus, when journalists and commentators focus on short-term data as they have done in this case, they obscure the larger picture of what has taken place in the past several years and over the longer term. Consider the following. 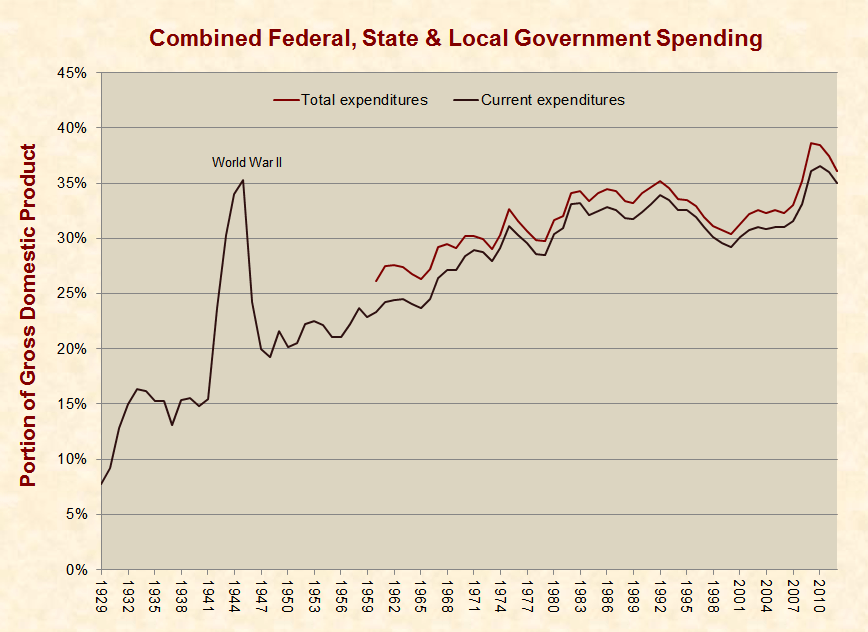