Since the outset of the Great Recession, left-leaning public figures have insisted that temporary increases in government spending—especially on social welfare programs—would rapidly stimulate the economy. Yet, as detailed below, even though such spending quickly rose to record levels, the economy has been burdened with high unemployment for more than four years since the recession ended.

Now that a portion of this increased spending has been scaled back, the left is blaming high unemployment and other economic ills on federal spending cuts, even though inflation-adjusted federal spending is currently 15% higher than it was before the recession, and social benefits comprise a greater portion of federal spending than ever recorded in the nation’s history.

To wit, the Huffington Post’s chief financial writer, Mark Gongloff, recently wrote that “the federal government has cut spending at the fastest pace since the end of the Vietnam War,” and these cuts in combination with other “harsh austerity measures” “instigated by Republicans,” are “ruining the economy.” In making that case, Gongloff cites sources that are specious and then drags them even further from the truth by misrepresenting what they say.

To support his claim that “the federal government has cut spending at the fastest pace since the end of the Vietnam War,” Gongloff links to a February 26th New York Times article entitled, “Austerity Kills Government Jobs as Cuts to Budgets Loom.” Notwithstanding the title, the fifth paragraph reveals that “total government spending continues to increase,” a point that Gongloff never mentions.

Like other left-leaning publications, the Times article focuses on a category of federal spending called “purchases and investments,” which excludes all social welfare programs. The Times reporter, Binyamin Appelbaum, justifies this narrow focus by asserting that “government purchases and investments expand the nation’s economy, just as private sector transactions do, while benefit programs move money from one group of people to another without directly expanding economic activity.”

Unlike Gongloff, who fails to state that he is citing only a subset of federal spending, Appelbaum directly reveals this caveat. However, Appelbaum neglects to provide other key context, such as the fact that this category of spending only accounts for one third of federal spending, and more than 60% of it is defense spending, which has fallen to less than 20% of the federal budget.

Even more importantly, the statement that “benefit programs move money from one group of people to another without directly expanding economic activity” is at odds with frequent, strident claims from the left that social welfare benefits are highly beneficial to weak economies, and government should stimulate the economy by enlarging these programs.

For a prime example in the vast array of such claims, in August 2011 White House Press Secretary Jay Carney scolded Laura Meckler from the Wall Street Journal for asking how unemployment benefits improve the economy. After telling Meckler that she should “know this as part of the entrance exam just to get on the paper,” Carney stated that unemployment benefits are

one of the most direct ways to infuse money into the economy because people who are unemployed and obviously aren’t earning a paycheck are going to spend the money that they get . . . and that creates growth and income for businesses that then lead them to making decisions about jobs—more hiring.

For another instructive example, while testifying before Congress in April 2010, Mark Zandi, the chief economist of Moody’s Analytics, stated:

No form of the fiscal stimulus has proved more effective during the past two years than emergency UI [unemployment insurance] benefits, providing a bang for the buck of 1.61—that is, for every $1 in UI benefits, GDP [gross domestic product] one year later is increased by an estimated $1.61.

Zandi also claimed that other social welfare programs, such as food stamps, stimulate economic growth. Advocates for increased social spending have repeatedly cited such assertions from Zandi and other economists as proof that government social benefits help the economy, but Gongloff and others are now excluding these and other programs from their measures of government spending.

Looking at the big picture, from the outset of the Great Recession in December 2007 through the third quarter of 2013, inflation-adjusted federal spending has grown by 15%, peaking at 22% above the 2007 level in 2010 (see graph below). Likewise, measured as a portion of the nation’s economy or gross domestic product, federal spending is now 11% above the 2007 level, peaking at 26% higher in 2010, when it consumed a larger portion of the U.S. economy than at any time since World War II. 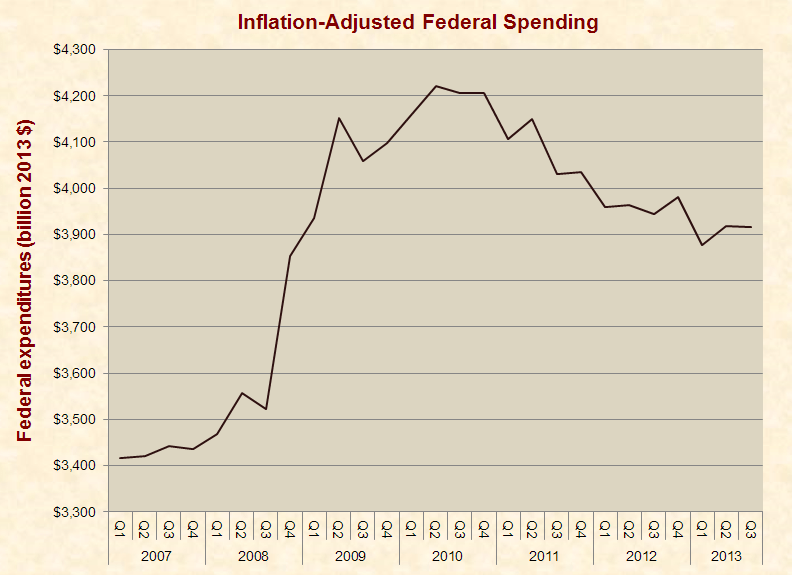 This spending growth has been the result of multiple factors, one of them being safety net programs that are structured to automatically expand during economic downturns and thereby drive increases in government spending that allegedly “reduce the depth of recessions….” More significantly, in the wake of the recession, several laws were passed that increased federal spending for the expressed purpose of stimulating the economy, with assurances that the spending would be “timely, targeted and temporary.”

The first of those “stimulus” laws was passed in February 2008 and provided refundable tax credits, which take the form of both tax cuts and spending. The most notable of these laws—the American Recovery and Reinvestment Act—was passed in February 2009 with claims that it would generate positive effects “very, very quickly,” “have its greatest impact on growth in the second and third quarters of 2009,” and “create between three and four million jobs by the end of 2010….”

As unemployment figures and other disappointing economic data have poured in, prominent journalists and commentators have blamed the results on decreased government spending, while neglecting to inform their audiences that such spending has been at or near record highs. Even in 2010, as federal spending reached its post-World War II record, and combined expenditures for federal, state and local governments were higher than at any time in the nation’s history, New York Times columnist and Nobel Prize-winning economist Paul Krugman was blaming the feeble economy on “drastic spending cuts” by state and local governments.

Such deceptive claims by Gongloff, Krugman, and others have been built upon patently false assertions, definitions of government spending that exclude large portions of it, and cherry-picked comparisons to record-high spending levels. In sum, there is a chorus of individuals who are attempting to link bad economic news to short-term falls in subsets of government spending, while at the same time concealing the broader realities of this issue from their readers and listeners.