Newly published data from the U.S. Treasury shows that the federal government has amassed $84.3 trillion in debts, liabilities, and unfunded Social Security and Medicare obligations. This amounts to $670,000 for every household in the U.S., a fiscal burden that equals 93% of the nation’s private wealth, including the combined value of every American’s assets in real estate, corporate stocks, small businesses, bonds, savings accounts, cash, and personal goods like automobiles and furniture.

Federal law requires the U.S. Treasury and White House to produce an annual report on the “overall financial position” of the federal government. The law also requires the Government Accountability Office to audit this data, which is then published in the Financial Report of the United States Government.

Despite the important and shocking nature of this report, a search of Google News shows no results for it, even though it has been almost a week since it was published.

Unlike the federal budget, which primarily uses cash accounting, this Treasury report uses accrual accounting. The Government Accountability Office explains that this accounting method “is intended to provide a complete picture of the federal government’s financial operations and financial position.”

This has major implications for future taxpayers, partly because pension and other retirement benefits are a large part of compensation packages for government employees. When these benefits are included, civilian, non-postal federal employees receive an average of 16% more in compensation than private-sector workers with comparable education and work experience. Postal workers receive an even greater premium.

The recently released Treasury report shows that the federal government currently owes $7.2 trillion in pensions and other benefits to federal employees and veterans. Paying the present value of these benefits would require an average of $57,000 from every household in the U.S. Yet the vast majority of these liabilities are not reflected in the national debt.

Social Security and Medicare differ from pensions, because taxpayers don’t have a contractual right to receive these benefits. In the original Social Security Act of 1935, Congress “reserved” the “right to alter, amend, or repeal any provision of this Act.” Consequently, the Supreme Court ruled in 1960 that Congress can change Social Security benefits at will. Nevertheless, paying these benefits is an implied commitment of the federal government, and federal law requires that these programs be included in the Financial Report of the U.S. Government.

Federal actuaries measure the obligations of Social Security and Medicare in several different ways, but only one of them approximates the concept of accrual accounting. This is called the “closed-group” obligation, which is the money needed to cover the shortfalls for all current taxpayers and beneficiaries in these programs. In the words of Harvard Law School professor and federal budget specialist Howell E. Jackson, the closed-group measure “reflects the financial burden or liability being passed on to future generations.” These burdens amount to $29.0 trillion for Social Security and $32.9 trillion for Medicare.

The Treasury report includes other obligations of the federal government, like environmental liabilities and accounts payable. The report also measures federal assets, such as cash, real estate, and corporate stocks. This excludes federal stewardship land and heritage assets, such as national parks and the original copy of the Declaration of Independence. While these items have tangible value, the report explains that the government “does not expect to use these assets to meet its obligations.”

Tallying the Treasury’s data on assets and subtracting its obligations shows that the federal government has a fiscal shortfall of $84.3 trillion in debts, liabilities, and unfunded Social Security/Medicare obligations. Divided evenly across all U.S. households, this amounts to an average of $670,000 per household.

The actual shortfall may be worse, because the Treasury data is based on federal government assumptions that are highly uncertain and optimistic. For example:

The current national debt is $19.9 trillion. This amounts to 107% of the nation’s gross domestic product, which is higher than any point in U.S. history except for two years near the end of World War II. The national debt, however, is mainly measured on a cash basis, and as such, it does not include most of the obligations detailed above.

These obligations are looming, and this can be seen in Congressional Budget Office projections of publicly held debt, which is which is a partial measure of the national debt that is often cited by government agencies and media outlets. In 2014, CBO projected that this debt would grow over the next two decades to unprecedented levels unless the government changed its policies. Two and half years later, the actual outcomes are slightly worse: 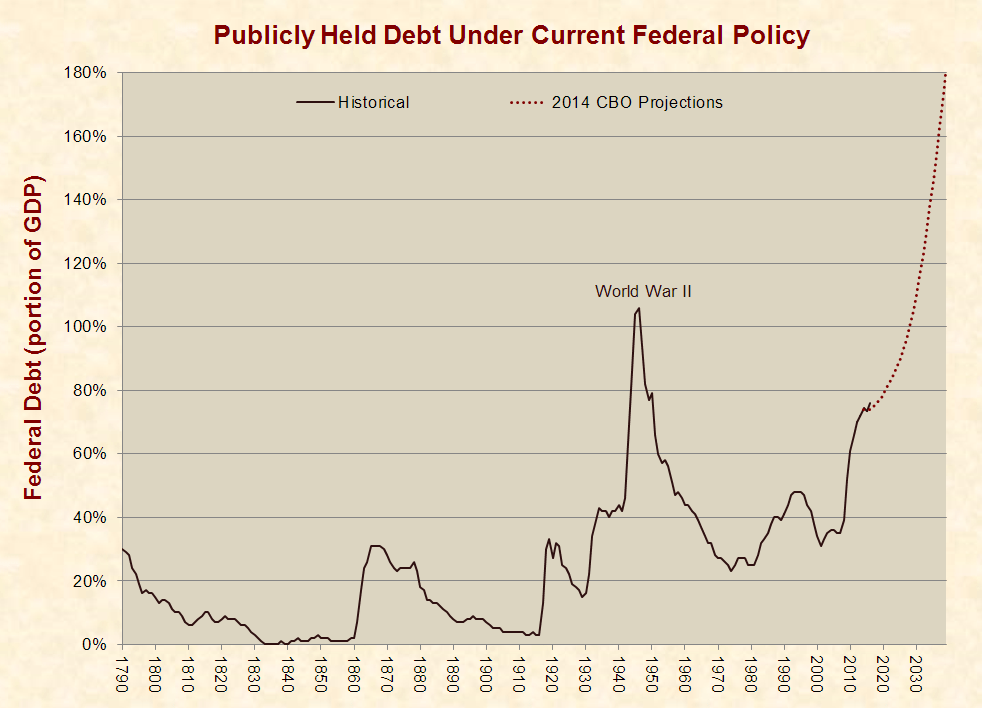 The vast bulk of current and impending federal debt is due to increased spending on social programs like Medicare, Social Security, Medicaid, and food stamps. Such programs have grown from 21% of federal spending in 1960 to 63% in 2015. Under current laws and policies, the Congressional Budget Office projects that almost all future growth in spending will be due to these programs and the interest on the national debt.

The Government Accountability Office has warned that “the costs of federal borrowing will be borne by tomorrow’s workers and taxpayers,” and this “may reduce or slow the growth of the living standards of future generations.” This may have already begun. The national debt has risen dramatically over the past decade, and with this, the U.S. has experienced historically poor growth in gross domestic product, productivity, and household income.