• “levels of greenhouse gases are higher than the worst case scenario outlined by climate experts just four years ago.”
• “Extra pollution in China and the U.S. account for more than half the increase in emissions last year.”
• There is “something good in recent emissions figures. The developed countries that ratified the 1997 Kyoto Protocol greenhouse gas limiting treaty have reduced their emissions overall since then and have achieved their goals of cutting emissions to about 8 percent below 1990 levels. The U.S. did not ratify the agreement.”

Third, Borenstein fails to mention that what amounts to a 4% increase in U.S. CO2 emissions during 2010 was on the heels of a 7% decrease in 2009. The Kyoto nations had a similar fall and rise, coinciding with the worldwide economic recession and partial recovery.

Fourth, referring to CO2 as “pollution” ignores the facts that natural CO2 emissions outweigh man-made emissions by a factor of twenty to one, and as explained in the academic text Carbon Dioxide Capture for Storage in Deep Geologic Formations, CO2 is “an essential part of the fundamental biological processes of all living things” and “does not cause cancer, affect development or suppress the immune system in humans.”

Fifth, the “good news” that the developed Kyoto signatories “achieved their goals of cutting emissions to about 8 percent below 1990 levels” is primarily a result of the recent recession and the collapse of the Soviet Union in 1991. As the BBC reported in 2005, industrialized countries participating in the Kyoto Protocol cut their emissions “largely because a sharp decrease in emissions from the collapsing economies of former Soviet countries masked an 8% rise among rich countries.”

Just Facts has compiled the relevant data in this Excel file and graphed it below to show the big picture. Note that from the time Kyoto was adopted, the CO2 emissions of the signatories that are not ex-Soviet bloc nations track those of the United States almost exactly. Also note that the former Soviet bloc nations have experienced little change in CO2 emissions since their initial decline following the collapse of the Soviet Union. 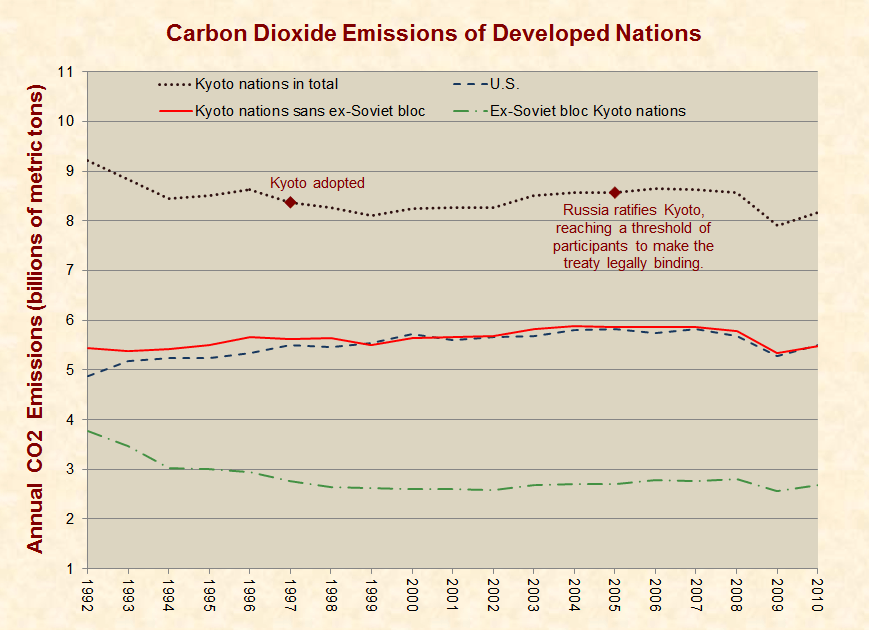 For more background on the Kyoto Protocol, click here.