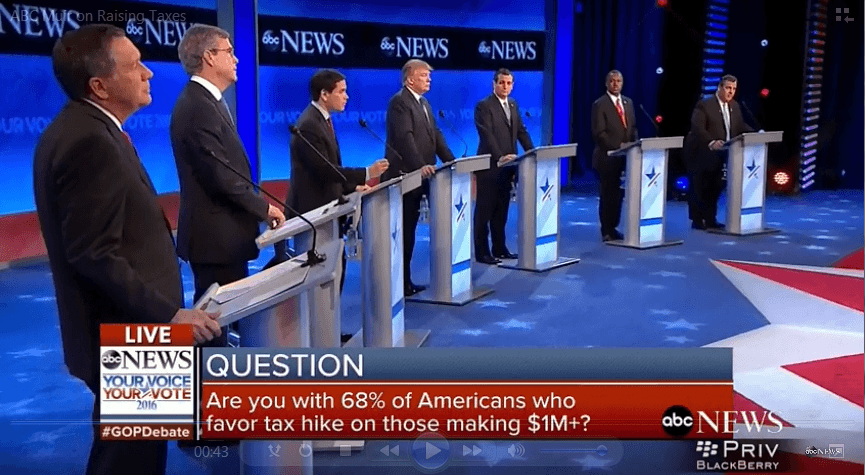 During Saturday night’s debate in New Hampshire for the Republican presidential nomination, ABC news anchor David Muir pointedly asked the candidates if they stood opposed to the two-thirds of Americans who want to raise taxes on the wealthy.

First, Muir grilled Marco Rubio by stating, “A recent poll [found that] 68% of Americans favor raising taxes on people making more than a million a year. Are they wrong?”

After Rubio answered, Muir turned to Jeb Bush and challenged him: “I just want to repeat that number to you: 68% of Americans favor raising taxes on people making more than a million. What would you say to people who believe that?”

After Bush was done, Chris Christie chimed in and bluntly stated, “Everyone in the public who is in that 68%, I want to tell you the truth: You’re wrong, and here’s why you’re wrong.”

Left unsaid by Muir and all of the candidates is that the media has manipulated the vast majority of Americans to believe that the wealthy pay a lower tax rate than the middle class. This shapes public opinion by leading people to feel that the “wealthy aren’t paying their fair share,” to borrow the words of Joe Biden.

That many people would share Biden’s view makes sense given that a recent scientific poll commissioned by Just Facts found that 82% of all voters, 90% of Democratic voters, 74% of Republican voters, and 86% of undecided voters believe that the middle class pays a higher federal tax rate than the upper 1% of income earners.

Yet, the exact opposite is true. In fact, it’s not even close. The Congressional Budget Office’s latest estimates of federal tax burdens show that middle-income households pay an average federal tax rate of 12%, as compared to 33% for the top 1% of income earners.

In other words, the top 1% pays 2.7 times the federal tax rate of the middle class. Importantly, these tax rates account for nearly all taxes and income, unlike the incomplete and misleading tax rates often reported by the press.

The Tax Policy Center, a joint project of the left-leaning Urban Institute and the centrist Brookings Institution, also arrived at similar results.

So how did public views on this issue become so divorced from reality? Beyond the rhetoric of politicians, prominent media outlets and fact checkers have continually reported deceptive tax rates that exclude certain taxes, use partial measures of income, or employ both of these charades. A brief sample of organizations that have done this includes the New York Times, CBS News, Agence France-Presse, PolitiFact, and FactCheck.org.

Newspapers have also given the platform of their op-ed pages for others to spread these untruths, including Warren Buffett, Columbia professor James B. Stewart, and former U.S. Secretary of Labor Robert Reich.

Many media outlets have also engaged in spreading similar falsehoods about state and local taxes, such as the Washington Post, the Daily Beast, Newsmax, and the Providence Journal.

In total, Muir’s question illuminates more about the integrity and professionalism of journalists than it does about the positions of any candidate on this issue.