Public opinion polls show high levels of support for raising taxes on the wealthy, and some people are touting these results to advance progressive tax policies. Such polls, however, are tainted by the common myth that the rich pay a lower average effective federal tax rate than the middle class. This belief has been widely spread by the media, but data from the U.S. Treasury, the Congressional Budget Office, and the Tax Policy Center prove the exact opposite is true.

Politico recently published an article by Ben White titled “Soak the Rich? Americans Say Go for It.” According to White, “the prospect of 70 percent tax rates for multimillionaires and special levies on the super-rich draw howls about creeping socialism and warnings of economic disaster,” but “when it comes to soaking the rich, the American public is increasingly on board.”

White bases his claim on a new Politico/Morning Consult poll “that found 76% of registered voters believe the wealthiest Americans should pay more in taxes.” He also cites a recent Fox News survey showing that “70% of Americans favor raising taxes on those earning over $10 million,” and “54% of Republicans” agree with this.

However, Politico fails to mention that these polls align almost perfectly with the portion of voters who have been misled to believe that the top 1% pays a lower average federal tax rate than the middle class. A recent scientific survey commissioned by Just Facts shows that 75% of voters believe this untruth, including 90% of Democrats, 61% of Republicans, and 78% of third-party voters.

This enormous disconnect between perception and reality accords with a deluge of misinformation by media outlets, which have repeatedly reported tax rates that exclude large portions of people’s taxes and/or incomes. A small sample of the perpetrators includes the New York Times, the Washington Post, the Daily Beast, Newsmax, the Providence Journal, FactCheck.org, PolitiFact, CBS News, and Agence France-Presse.

Comprehensive, accurate tax rates must account for all taxes and all income. This includes hidden taxes, capital gains, loopholes, deductions, and benefits that are typically not taxed, like employee health insurance. The U.S. Treasury, the Congressional Budget Office, and the Tax Policy Center have conducted such analyses, and all of them find that the wealthy pay far higher effective federal tax rates than middle-income households: 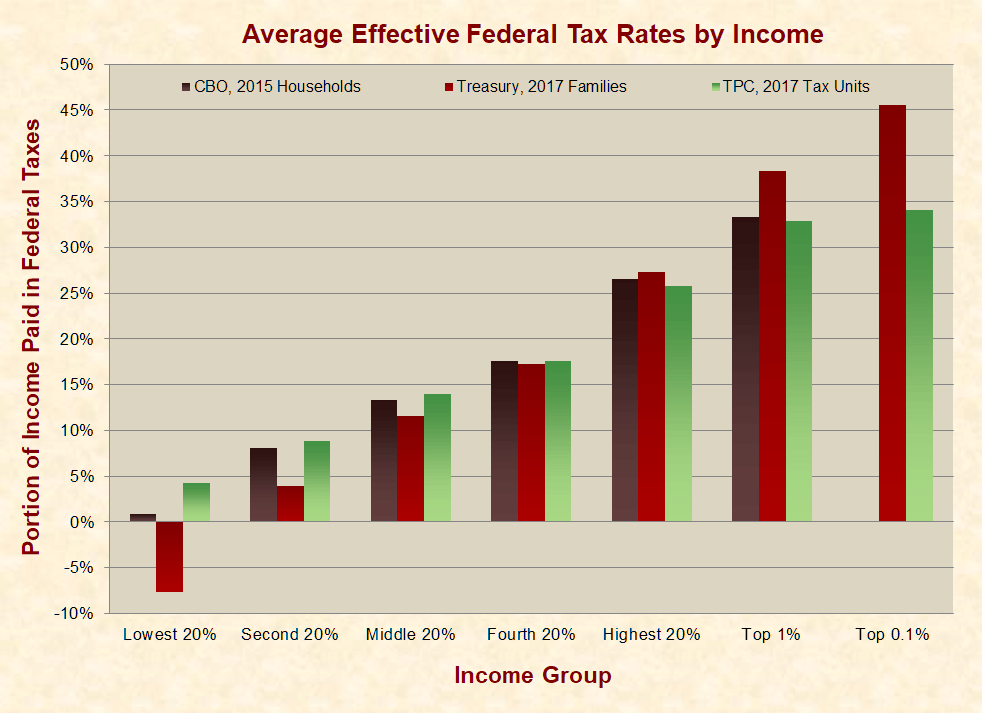 By feeding falsehoods to respondents, pollsters can severely distort the results of their polls. The press has done that on a wholesale basis with the American public on this issue and many others.