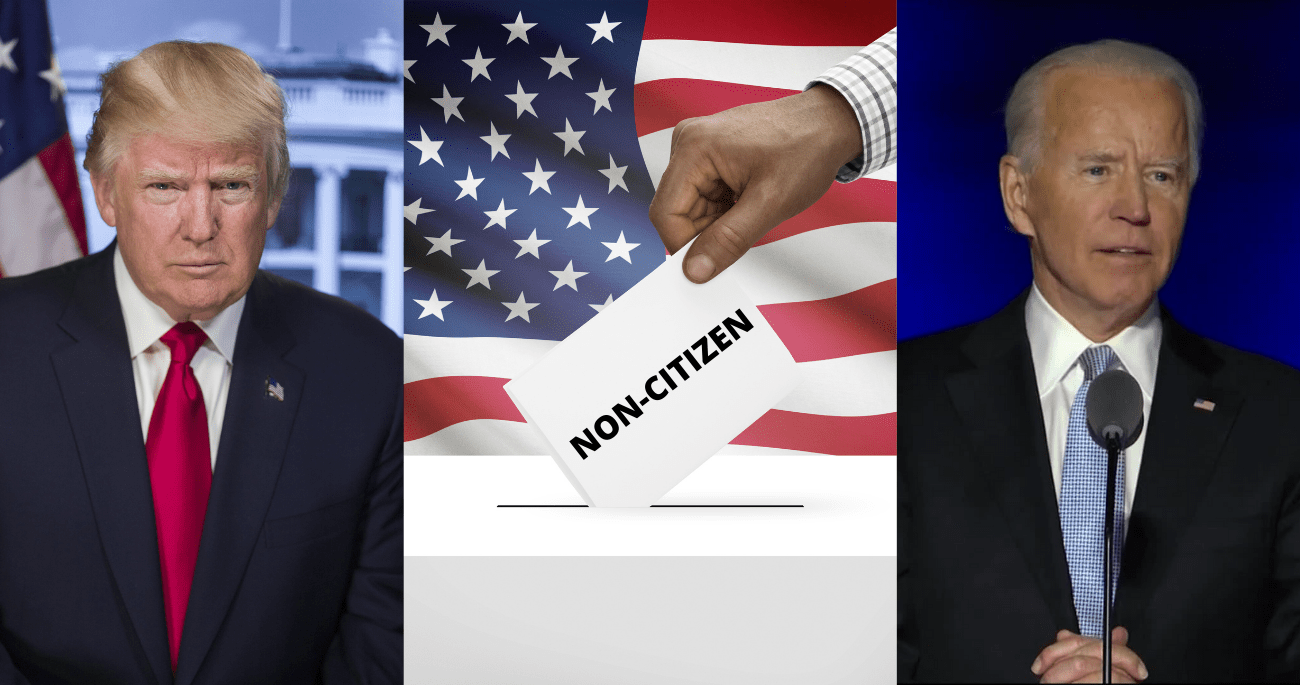 Based on current population data from the Census Bureau and voting data from previous elections, Just Facts has conducted a study to estimate the number of votes illegally cast by non-citizens in the battleground states of the 2020 election. The results—documented in this spreadsheet—show that such fraudulent activities netted Joe Biden the following extra votes in these tightly contested states:

These estimates account for just one type of election fraud, and they tend to understate it because they depend on Census surveys, which are known to undercount non-citizens.

Just Facts asked two Ph.D. scholars who specialize in data analytics to critically review this study, and they assessed it as follows:

“I find this research of great value—clear in its assumptions, clear about the sources of data used, methodologically sound, and fair in its conclusions. Furthermore, it contains enough references to allow any interested person to ‘fact-check’ every aspect of it.”
– Michael Cook, Ph.D. Mathematician, Scientific and Quantitative Researcher

“Instead of adding politics, vitriol, and bias to this timely, heated topic, this study provides a credible data analysis that supports a strong hypothesis of non-citizens having a significant effect on this election. Any serious critic should try improving on these estimates, as opposed to dismissing them with unproven claims.”
– Dr. Andrew Glen, Ph.D., Professor Emeritus of Operations Research, The United States Military Academy, and Award-Winning Researcher in the Field of Computational Probability

The federal voter registration form requires people to declare under penalty of perjury that they are U.S. citizens, but it does not require them to provide documentary evidence that they are citizens. Several states, including Arizona and Georgia, tried to implement such a requirement, but they were blocked from doing so by court rulings backed by the Obama administration.

The enforcement situation was aptly summarized by Barack Obama shortly before the 2016 U.S. presidential election when actress Gina Rodriguez asked him if “Dreamers” and “undocumented citizens” would be deported if they voted. Obama replied:

Not true. And the reason is, first of all, when you vote, you are a citizen yourself. And there is not a situation where the voting rolls somehow are transferred over, and people start investigating, etcetera.

After dodging the fact that Dreamers and undocumented immigrants are not citizens, Obama’s clear message was that there is no effective way to enforce the law that prohibits them from voting.

Some states require applicants to submit their Social Security numbers, but the vast majority of states allow for other means of voter registration, like submitting a driver’s license number, bank statement, or utility bill. These provide little-to-no evidence of citizenship.

The magnitude of identity fraud that would allow non-citizens to vote has been laid bare by:

In accord with the open doors to illegal voting, scientific surveys of non-citizens have found that:

The consistency of these rates over time suggest that they are applicable to later elections where such data is currently unavailable.

Furthermore, those rates are merely for self-admitted actions, and database matches with voting and registration records show the actual rates are about twice as high. In 2008, the one year for which Just Facts has full data, 27% of non-citizens were registered to vote, and 16% of them actually voted. This 16% rate, applied to the latest Census data for the numbers of non-citizens in battleground states, is the basis for the 2020 estimates of illegal voting by non-citizens.

The 16% rate is partially corroborated by the 2012 data. In that year, 9% of non-citizens stated “I definitely voted” in the presidential election, and database matches could add another 11% to this figure. However, some of the people in the database overlap with those who said they voted, and the exact number of overlaps is unknown to Just Facts. If the overlap rate is the same as in 2008, the data would show that 17% of non-citizens voted illegally in the 2012 election.

The results of such studies have sizeable margins of error due to relatively small sample sizes, and these are reflected in the above estimates for the 2020 election. As is often the case with estimates of illicit actions where enforcement is sparse, there are other possible sources of error, some of which may produce overcounts and some undercounts. But given that the Census Bureau counted 21,749,984 non-citizens in the U.S. during 2019, even if only 5% of them voted, this would amount to more than a million illegal votes cast in the 2020 election.

Some media outlets and “fact checkers” have tried to contest the reality that substantial numbers of non-citizens vote in U.S. elections, but a multitude of facts from academic books and journals have shown that their arguments consist of mathematically illiterate notions, half-truths, and outright falsehoods.

Who Do Non-Citizens Vote For?

The lopsided votes of non-citizens for Democrats are also consistent with the promises and actions of Democratic politicians to give free healthcare, amnesty, and citizenship to people who illegally immigrate to the United States.

Just Facts’ study applies the party vote breakdown of 82% Democrat and 18% Republican to the 2020 election. By subtracting these illegal votes for Trump from the illegal votes for Biden, the study arrives at the figures above for the extra votes that these fraudulent activities have netted Biden in the battleground states.

A common argument used to dismiss facts about election fraud is that President Trump’s Advisory Commission on Election Integrity failed to find widespread evidence of such malfeasance. This claim is a classic half-truth because it neglects to reveal that the Commission existed for less than a year because its work was blocked by the refusal of states to turn over voter data and a flurry of lawsuits.

In the words of California’s Secretary of State in 2017:

Yesterday’s ruling is merely the first in a string of lawsuits challenging the Commission. Those lawsuits send a strong message—the Commission will face opposition at every step of the way from those who are fighting to protect our voting rights, our privacy, and our democratic principles.

Contrary to the allegation that the Commission sought “personal voter data,” it actually asked the states for “detailed, publicly available voter roll data.” Given that Trump now has legal “standing,” or “a personal stake in the outcome of the controversy,” courts may force states to turn over the data that they previously withheld. This would allow the Trump campaign to cross check voter rolls against other databases that contain information on citizenship status.

Without such cross checks—which certain states stridently opposed under the guise that the data is personal—claims that widespread voter fraud doesn’t exist because the Commission didn’t find it are misleading and baseless.

A wealth of facts show that there are ample openings for non-citizens to illegally vote and that roughly 16% of them voted in the 2008 and 2012 presidential elections. If this was also the case in the 2020 battleground states where Biden currently has slim leads, the numbers of non-citizens in these states and their preference for Democrats may have netted Biden enough fraudulent votes to tip the overall election winner from Trump to Biden.