New York Times economics analyst Eduardo Porter recently penned two columns about income inequality in which he claimed that the “job market is not working to distribute wealth” and “has lost much of its power to deliver income gains to working families” over the past four decades. As proof of this, he quoted data on “household incomes” from the U.S. and other countries.

Such logic, which is common among those who claim that income inequality is at historic highs, suffers from a fatal flaw. This is because the disintegration of families has spread workers’ wages over an increasing number of households during this era. As shown in the graph below, between 1967 and 2013, the portion of unmarried or nonfamily households in the U.S. rose from 29% to 52%: 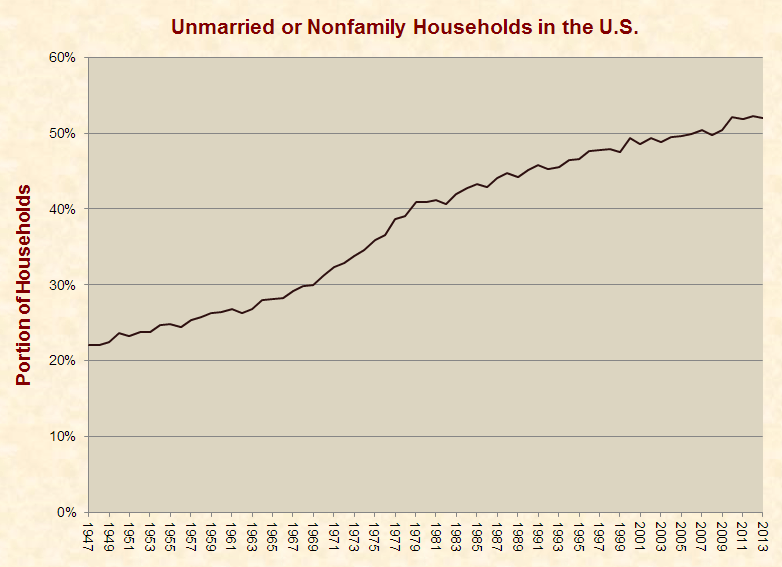 A consequence of this marked decline in traditional family households is that household wages significantly understate job market gains. For instance, when a couple who each earns $50,000 per year gets separated or divorced, their incomes often remain the same, but their average household income drops from $100,000 to $50,000. In cases where only one spouse earns income, his or her earning power may decline due to the added responsibilities of single parenthood, and this single income may be split among two households due to alimony payments.

The effects of these family dynamics are evident in the Gini index, which is widely recognized by monetary institutions, economics textbooks, and academic journals as the most common measure of income inequality. Since 1967, which is as far back as the Census Bureau provides this data, the Gini index for households has consistently risen, prompting the Huffington Post (and others) to report that income inequality is at a “record high.” That claim, however, is deceptive, because the Gini index for persons has been generally level throughout this period (hat tip: Political Calculations and Ivan O. Kitov): 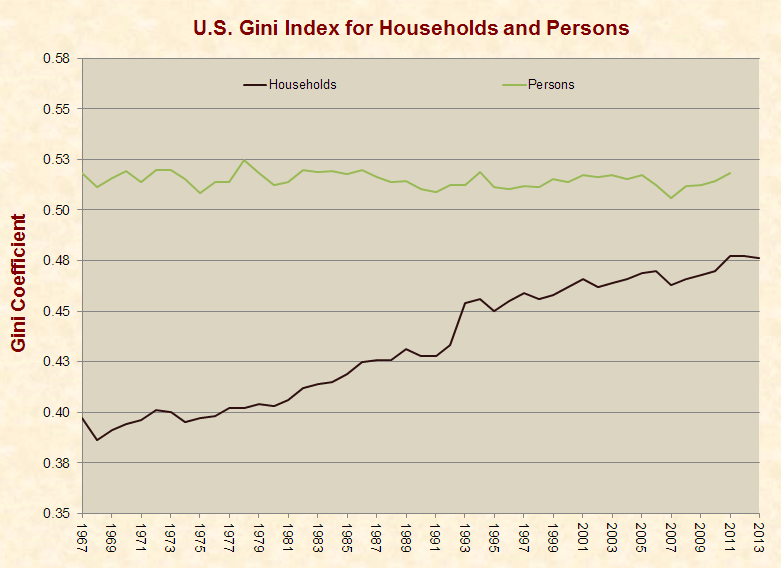 This stark difference between the Gini index for households and persons shows that rising household income equality has not been driven by “an inadequate job market” as Porter claims—but by the breakdown of families. Other facts relating to household structure and income underscore this reality:

Liberals often argue that conservatives have mistaken the effect for the cause, and that economic hardship has spurred the decline of intact families instead of vice-versa. For example, Jeff Spross, the economics and business correspondent at The Week, has asserted that the “primary” reason for the collapse of marriage in the U.S. is the “demise of good middle-class jobs and economic security.” This notion is at stark odds with the fact that the median real income of U.S. households rose by 40% between 1979 and 2011.

A more nuanced and academic version of the argument made by Spross is that a decline in material welfare is not the cause of family breakdown but “a sense of economic despair” felt by poorer people because of the wealth gap between themselves and richer people. This theory, which is based on the Gini index for households, conflicts with the fact that the Gini index for persons has stayed flat for decades while the rates of unmarried and nonfamily households have soared. If this hypothesis had any merit, the Gini index for persons would have preceded and mirrored the decline in family cohesiveness.

Additionally, the Gini index does not capture all income and taxes, and if it did, it would likely show lower levels of inequality over the past several decades. This is evidenced by the Census Bureau’s more comprehensive measures of household income, which are available from 1979 to 2003. These data account for numerous forms of income and taxes that are not included in the Bureau’s standard measure of income, and the most comprehensive of these measures shows Gini figures and trends that are lower than the Bureau’s standard measure.

A rational and factually coherent explanation for the decline of families is changes in ethics about sex outside of marriage, divorce, and unwed child-bearing. Since Gallup began polling Americans on these issues in 2001, moral acceptance of sex between unmarried men and women rose from 53% to 66%, divorce from 59% to 69%, and having a baby out of wedlock from 45% to 58%.

Summarizing the facts above, personal income inequality has not risen for half a century, and the rise of household income inequality stems from family disintegration driven by changing attitudes toward sex, marital fidelity, and familial responsibility.