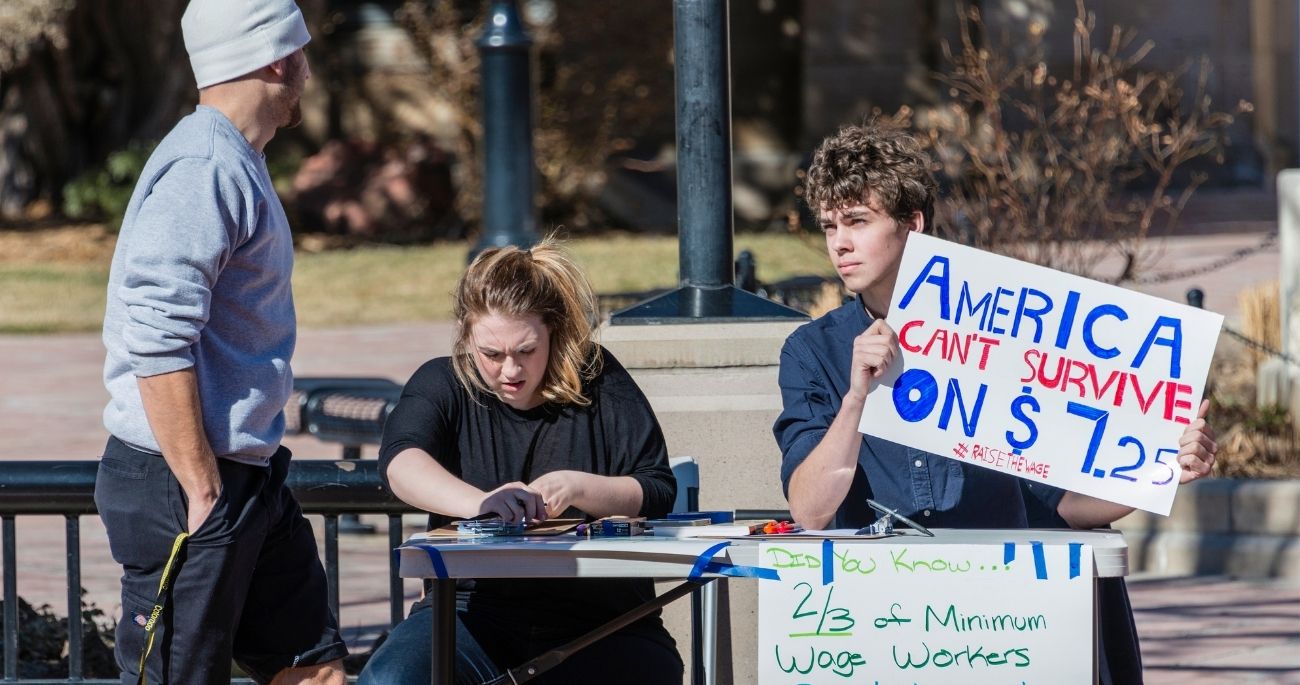 At 2:00 AM on Saturday, February 27, Democrats in the U.S. House of Representatives voted to pass a “COVID relief and economic support” bill at a cost to taxpayers of $1.9 trillion. The next Saturday, Senate Democrats passed a very similar bill, and President Biden stated he will sign it. This will be the sixth “COVID relief” law and swell the tab for such legislation to a total of $5.3 trillion. The combined cost of these laws to every household in the United States will be an average of $41,036.

The House bill also contained a provision to double the federal minimum wage from $7.25 to $15.00 an hour. The Senate rejected this for now, but given that 97% of Congressional Democrats voted for this, it will likely be back on the agenda soon.

Proponents of raising the minimum wage to $15/hour often claim that any economic harm from this would be minimal compared to the law’s benefit of “lifting nearly a million people out of poverty.” That stylized statistic—which is derived from a recent Congressional Budget Office (CBO) analysis—is grossly misleading because CBO has estimated that the law would raise the average total income of families below the poverty line by about $589 a year or merely 1%. This increase is about half of what they spend on sweetened drinks, desserts and candy.

CBO’s estimated tradeoffs for this 1% rise in income include the destruction of 1.4 million jobs, a slight decline in the overall economy, increased inflation, more government debt, and greater burdens on taxpayers.

CBO is clear that minimum wage analyses “are uncertain, and there is a wide range of possible outcomes on either side of the estimates shown in this report.” This is the case with most government policies because numerous factors can affect economic and societal outcomes, and there is frequently no objective way to isolate and quantify the effects of a single factor like the minimum wage.

“Lifting People Out of Poverty”

Politicians, commentators, and journalists often say that raising the minimum wage to $15/hour would “lift almost a million people out of poverty.” Such proclamations appear in articles by CBS, NPR, PBS, Reuters, the Washington Post, Vox, and ABC News, as well as commentaries published by Time, Rolling Stone, and the Los Angeles Times, and statements by the AFL-CIO, Bernie Sanders, and Ilhan Omar.

That narrative is rooted in a recent analysis by the Congressional Budget Office which estimated that raising the minimum wage to $15/hour would reduce the number of people living below the poverty line by 0.9 million. Contrary to the phrase “lifting people out of poverty,” this does not necessarily involve a dramatic change in their finances. It only means they will receive at least a little more than the official federal poverty thresholds.

For example, a single parent with two children and a yearly income of $20,000 would be “lifted out of poverty” if their reported cash income rose above $20,852—the federal poverty threshold for this family structure.

That slight bump in income is typical of what the law would accomplish because CBO estimated in July 2019 that raising the minimum wage to $15 per hour “would increase real family income” of “families under the poverty line” by “an average of $600 per year.” Several months later, CBO revised this to $589.

How can their income rise by only $589 given that a full-time worker who gets a raise from $7.25 to $15 an hour will receive an extra $15,500 in wages per year? One of the main reasons is that the vast bulk of people in poverty work very little or not at all. In fact, only 27% of adults in poverty during 2018 were in the labor force for at least half of the year. This includes part-time workers and those who were simply looking for work.

Consequently, CBO estimates that increasing the minimum wage to $15/hour would give 81% of the resultant wage increases to families who were already above the poverty line.

Moreover, an extra $589 per year is merely 1% of the average total income of households in poverty. This is because their real incomes are several times greater than commonly reported. The official poverty/income statistics—published by the Census Bureau and widely used by governments and media outlets—exclude a vast array of goods and services that poor people receive from governments and charities. Thus, they ignore the following realities:

All told, the poorest 20% of U.S. households consumed an average of $57,049 of goods and services in 2010 (latest data), while reporting only $11,034 in pre-tax cash income. That last figure is used to determine the official poverty rate, but the first one represents their total income—and $589 amounts to only 1% of it.

For perspective, $589 is about half of what households who receive Food Stamps spend per year on average for sweetened drinks, desserts, and candy. This is not nearly enough to truly lift anyone out of poverty.

In fact, economic growth in 2019 raised the reported cash incomes of 4.2 million people above the federal poverty thresholds (H/T: Andy Puzder). This occurred during a single year of prosperity and is 4.7 times greater than the 0.9 million people who would supposedly be “lifted out of poverty” by doubling the minimum wage.

Another reason why the average income increase from doubling the minimum wage is so low is that CBO estimates the law would destroy 1.4 million jobs. This is because “when the cost of employing low-wage workers goes up,” some employers will replace them with machinery, technology, and higher-wage workers.

This is basic economics. When the prices of goods and services rise (like the services provided by low-wage workers), people tend to purchase less of them.

CBO notes there are “some limited circumstances” where “increasing the minimum wage could boost employment if employers” have something called “monopsony power.” However, such situations are the exception, not the rule.

At the current minimum wage, employers would lose money if they fired two $7.50/hour low-skill employees and replaced them with one $25/hour employee who performs the same work as the two of them combined. However, if the government forces employers to pay these two low-skill workers $15/hour, employers will save money by replacing both of them with the one worker who is more productive.

Hence, CBO finds that “young, less educated people would account for a disproportionate share of those reductions in employment.” CBO also estimates that by 2025 “half of the 1.4 million people who would be jobless because of the bill would have dropped out of the labor force.”

In the words of Ph.D. economists Don Boudreaux and Walter Williams, this disparate impact on young and less educated people makes the long-term consequences of the minimum wage even “more dire” because “the climb to higher wages begins for most workers during their teenage years with entry-level jobs.” As such, raising the minimum wage saws “off the bottom rungs of the economic ladder” and leaves inexperienced workers “unskilled and unemployed for the indefinite future.”

For decades, some people have alleged that newer minimum wage studies typically find no negative impacts on employment. This claim was debunked by a 2007 paper in the journal Foundations and Trends in Microeconomics. Per the paper, which was written by Ph.D. labor economists David Neumark and William Wascher:

A 2015 paper by the same scholars and Ph.D. labor economist Ian Salas goes into great detail about the flaws of studies that conclude the minimum wage does not destroy jobs.

Beyond the direct impacts on poor and young people, CBO also estimates that raising the minimum wage to $15 per hour “would increase the cost to employers of producing goods and services,” and this would increase consumer prices, thus leading consumers to purchase fewer goods and services and reducing “employment of workers at all wage levels.”

Due mainly to such job losses, CBO finds that “raising the minimum wage would slightly reduce real GDP,” or the nation’s inflation-adjusted gross domestic product. This is the standard measure of nations’ economic output and has broad implications.

As explained in the textbook Microeconomics for Today, “GDP per capita provides a general index of a country’s standard of living. Countries with low GDP per capita and slow growth in GDP per capita are less able to satisfy basic needs for food, shelter, clothing, education, and health.”

The National Debt & Burden on Taxpayers

Progressives claim that raising the minimum wage to $15/hour would reduce dependence on welfare and save taxpayers money. However, the same CBO analysis estimates that this law would cause spending on most social programs to rise and increase the “cumulative budget deficit over the 2021–2031 period” by $54 billion.

This is because raising the minimum wage would increase the prices of goods and services purchased by social programs and make more people jobless. These individuals will become even more dependent on government, and the national debt will rise, creating a greater burden on taxpayers.

CBO also estimates that raising the minimum wage to $15/hour “would change the relative prices of goods and services,” and especially raise prices “for goods or services whose production required a larger-than-average share of low-wage work, such as food prepared in restaurants.” Other prices would rise as well but to a lesser extent.

Simply put, these higher prices mean higher inflation, and that means people will get less goods and services for their money.

CBO finds that greater “inflation under the bill” will raise interest costs on the national debt and increase the federal budget deficit by another $16 billion beyond the $54 billion above.

Minimum wage laws force employers to pay certain employees more than the market rate for their services. The immediate effects of this are obvious: the workers will receive more wages.

However, the prolific economist William A. McEachern warns that it is a “mistake” to only consider the immediate effects of public policies and “ignore the secondary effects, or the unintended consequences” of them. He then emphasizes:

Economic actions have secondary effects that often turn out to be more important than the primary effects. Secondary effects may develop more slowly and may not be immediately obvious, but good economic analysis tries to anticipate them and take them into account.

By doing that while aptly noting there is room for uncertainty, the Congressional Budget Office has estimated that increasing the federal minimum wage to $15 per hour would:

One of the most basic concepts in economics (and logic) is weighing costs and benefits. A failure to do this can make virtually any policy seem positive or negative. The facts above—which most and possibly all media outlets have failed to report in full—provide a wealth of information to assess the pros and cons of increasing the minimum wage.