In his annual letter to the shareholders of Berkshire Hathaway, Warren Buffett—the world’s third richest person—remarked on the state of the U.S. economy and current political fracas by writing:

It’s an election year, and candidates can’t stop speaking about our country’s problems (which, of course, only they can solve). As a result of this negative drumbeat, many Americans now believe that their children will not live as well as they themselves do. That view is dead wrong: The babies being born in America today are the luckiest crop in history.

Buffett went on to explain why he thinks this is so: the U.S. economy (measured in GDP) has been growing at 2% per year above the rate of inflation, while population has been growing at 0.8% per year. Based on these two figures, he calculates that America will enjoy 34% in real economic growth per person over the next 25 years.

While his data and math are sound, Buffett makes assumptions that stand a good chance of not materializing given current economic trends. He aptly notes that “nothing rivals the market system in producing what people want,” and thus:

For 240 years it’s been a terrible mistake to bet against America, and now is no time to start. America’s golden goose of commerce and innovation will continue to lay more and larger eggs.

The problem with this line of reasoning is that Americans have been choking this golden goose in unprecedented ways, and it is showing objective signs of decline. If this continues, today’s newborns could easily be the first generation of Americans to live materially worse than their parents. This is clear from the following graph, which displays the same calculation Buffet performed averaged over 10-year periods so that the long-term patterns are evident: 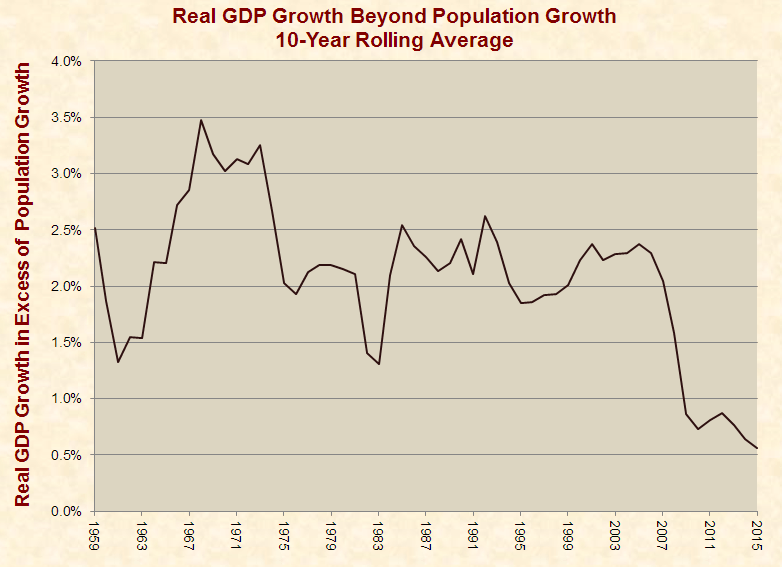 Granted, the Great Recession (2007-2009) occurred within the last decade. However, even when excluding these years, real GDP growth beyond population growth from 2010 to 2015 has been 39% below the average of the 25 years prior to the Great Recession.

Such weak growth is not only troublesome but odd, because the economy normally grows quickly after recessions. Indeed, renowned liberal economist Paul Krugman once argued that “the economic expansion under President Reagan did not validate his economic doctrine,” because “rapid growth is normal when an economy is bouncing back from a deep slump.” (Hat tip: Larry Elder)

Concurrent with America’s decay in economic growth per person, at least three factors with major effects on it have approached or surpassed unprecedented levels. These are federal debt, government social benefits, and regulations. Barring experimental data, it is often impossible to objectively isolate the effects of any single factor on an economy, but as detailed below, these three factors may explain a large portion of what has occurred and what may continue to occur unless the nation significantly changes course.

One of the surest ways to harm future generations is by running up government debt. In the words of the U.S. Government Accountability Office, “the costs of federal borrowing will be borne by tomorrow’s workers and taxpayers” and this can eat away at their “living standards.”

In recent years, federal debt has grown at a faster pace and to higher levels than at any time in U.S. history except World War II. Unlike the WWII debt—which quickly declined when the war ended—the Congressional Budget Office projects that current federal polices will increase debt to far beyond anything ever experienced in the history of the U.S.: 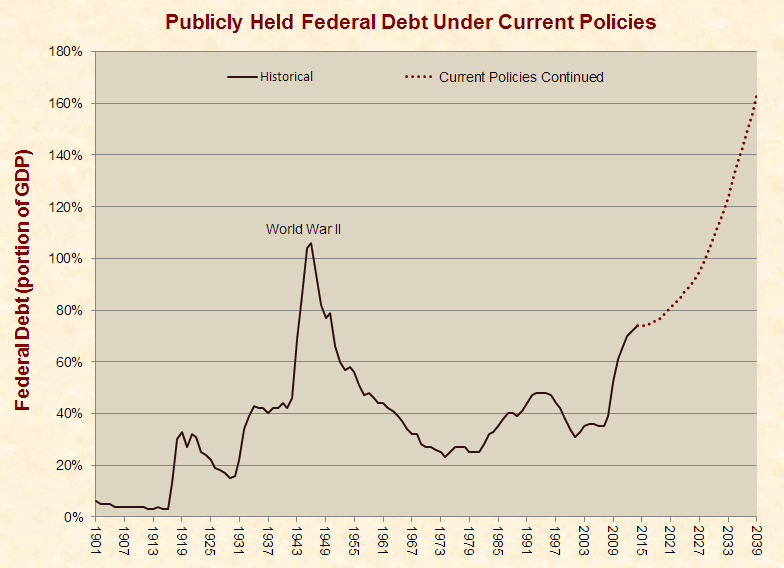 Such levels of government debt can cause many destructive effects, but one of the most common is a reduction in economic output. Contrary to what some have alleged, this outcome is widespread and substantial.

Moreover, it has real consequences for real people. Per the textbook Microeconomics for Today, countries with “slow growth in GDP per capita are less able to satisfy basic needs for food, shelter, clothing, education, and health.”

In basic terms, GDP is defined by the equation: Hours worked × Labor productivity. Social welfare programs play an important role in this equation, because they reduce the first factor in it: hours worked.

As explained by the Congressional Budget Office, social benefits “create an incentive for some people to work less” by:

Some have attempted to dispute these realities, but even Lawrence Summers—Obama’s former chief economist and Clinton’s Treasury Secretary—has acknowledged that government assistance programs provide “an incentive, and the means, not to work.”

For nearly a century, social benefit programs have consumed an increasing share of the U.S. economy, rising from 1% of GDP in 1930 to 14% in 2014. During the same period, they have also devoured a mounting portion of federal, state, and local government revenues, growing from 9% in 1930 to 50% in 2014.

The federal government projects that spending on several major social programs will increase substantially over the coming decades. This includes Medicaid, Medicare, Social Security, and the insurance exchanges created by Obamacare. Due to the design of these programs and the fact that life expectancies are increasing without comparable increases in program eligibility ages, much of these social benefits will flow to able-bodied adults. This will reduce their incentive to work, and with that, economic growth.

Rising social benefits, the aging of baby boomers, and other factors are already impacting the average time spent working by Americans. Since 1999, when the female labor force participation rate peaked, the total amount of hours worked in the U.S. divided by the number of adults in the U.S. has fallen by 11%. This does not bode well for the future of young Americans, for the burden of supporting these people will fall on their backs.

Another key hindrance to economic growth that has reached new heights in recent years is regulatory burdens. Politicians and their subordinates enact regulations to provide benefits for society or segments of it, but to accomplish this, they typically force people to act in ways they normally would not. This often entails some form of economic tradeoff that impairs productivity by creating red tape or restricting people from using cost-effective means of production. For example:

Productivity is the second variable in the GDP equation above, and it is hard to overstate its significance. As explained by Federal Reserve Chair Janet Yellen, “The most important factor determining living standards is productivity growth.” Likewise, the Congressional Budget Office has emphasized that “a small change in the growth of productivity” over an extended period can do more harm than recessions, because low productivity reduces economic “output by an ever-increasing amount.”

Ominously, average productivity growth for the past five years has been lower than any other five-year period on record, which extends back to 1947. In fact, it has been 82% below the average of the 50 years prior to the Great Recession. The blame for this cannot be laid solely at the feet of regulations, but regardless of the reasons for it, this situation poses another severe threat to the so-called luckiest generation.

There is another factor that does not play directly into GDP, but it does have a negative impact on living standards and is at all-time highs and trending higher. This is the disintegration of families, which spreads workers’ wages over an increasing number of households and thereby lowers their household income.

For example, when a couple gets divorced, their incomes often remain the same, but this money does not provide the same standard of living, because the couple must frequently bear the cost of maintaining two separate households. In cases where an income earner has custody of children, her (or his) earning power may decline due to the added responsibilities of single parenthood and the time it takes to do all of the tasks associated with running a household. 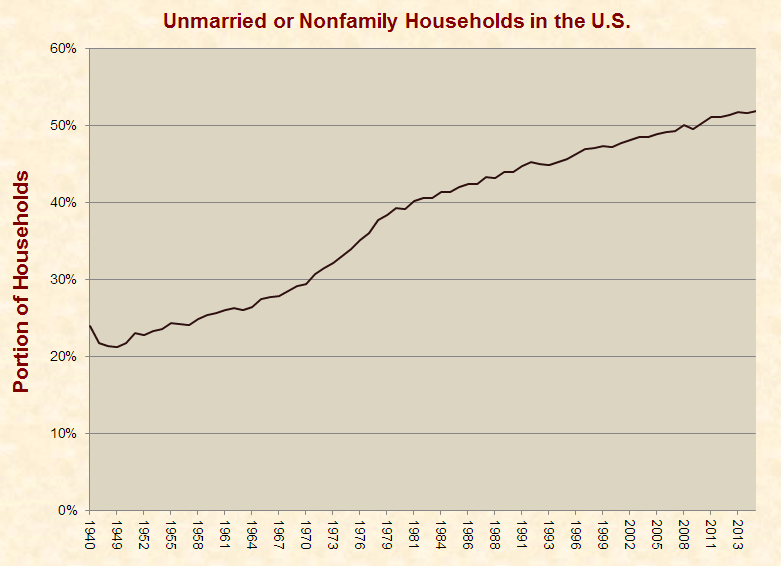 Beyond its effects on living standards, this familial breakdown is also the primary cause of rising household income inequality. Once again, this is not a promising development for the future of America’s children.

There is no way to know for certain if today’s newborns will live worse or better than their parents. However, to make an educated guess, one must look at trends instead of taking a snapshot in time, as Buffett did. Regrettably, the key trends examined herein are decidedly negative.

The good news is that none of these factors are outside the control of the American people. They can chose by the way they vote, work, and live to nurture the golden geese of commerce, financial responsibility, and family. This will give today’s youth real opportunities for economic progress that previous generations of Americans have enjoyed.