Lambasting the Washington Post for an article about Social Security that “would have been excluded from most opinion pages because of all the inaccuracies it contained,” Ph.D. economist Dean Baker writes:

The “runaway national debt” is also a Washington Post invention. The deficits have soared in recent years because of the economic downturn following the collapse of the housing bubble. No responsible newspaper would discuss this as a problem of the budget as opposed to a problem with a horribly underemployed economy.

As a matter of fact, the Congressional Budget Office (CBO) recently estimated the effect of the economic downturn on the federal budget deficit for fiscal year 2012 (which began on October 1st, 2011) and found that

if the economy was operating at its potential level—the projected federal deficit under current law in fiscal year 2012 would be about a third lower, or roughly $630 billion instead of the $973 billion projected in CBO’s most recent baseline.

In other words, two-thirds of the federal deficit is in fact a problem of the budget. Moreover, the CBO has projected that publicly held federal debt will skyrocket under current policy, even if unemployment drops to 5% and stays there: 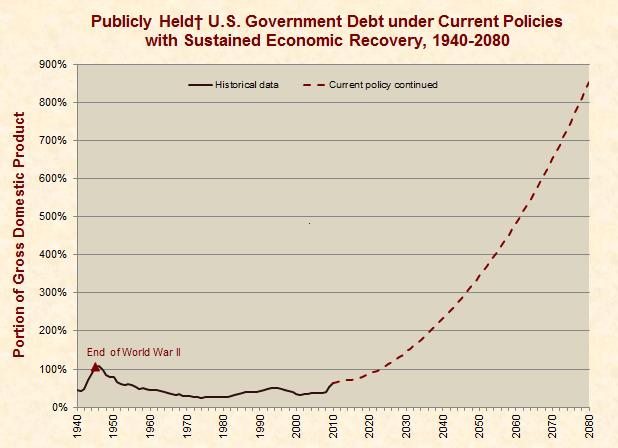 Stay tuned for more facts about Baker’s critique of the Washington Post.