The journal Science is one of the most prestigious and cited publications in all of academia. Its website boasts of being “the world’s leading outlet for scientific news” and having “more than 100 of the world’s top scientists” on its Board of Reviewing Editors. These luminaries recently published a paper by a team of ecologists and biologists who concluded that mankind is headed towards causing “a major extinction” of marine animals.

This paper was greeted with extensive media coverage warning of a looming disaster. Such stories were published by Discovery News, Yahoo News, Scientific American, The Independent, the Boston Globe, and the New York Times. The last of these, for instance, described the paper as “a groundbreaking analysis of data from hundreds of sources” that found “humans are on the verge of committing unprecedented damage to the oceans and the animals living in them.”

All of these media outlets reported on this paper without a hint of skepticism, and this paper was obviously approved by Science‘s review board or it could not be published there. However, the paper repeatedly misuses data in support of its primary conclusion, which is that “we are setting ourselves up” for a “wildlife Armageddon” in the oceans, to borrow the words of the paper’s lead author.

The basis for this assertion is that mankind has caused numerous extinctions of land animals since the outset of the Industrial Revolution about two centuries ago, and the trends that led to these extinctions are now evident in the oceans. The authors of the paper attempt to prove this with the two graphs shown below. In these charts, the green lines signify land animals, and blue lines marine animals.

To substantiate their crucial claim that “rates of extinction on land increased dramatically” after the Industrial Revolution, the authors provide this chart in the paper’s file of supplemental information: 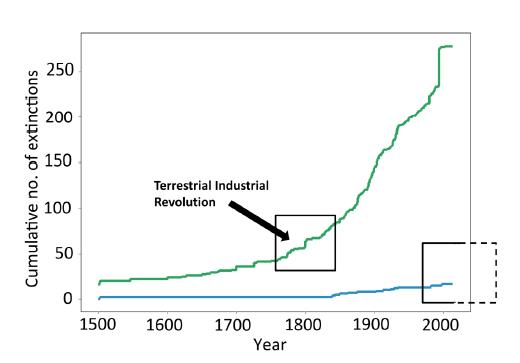 This graph is a prime example of data misuse, because the record of documented species extinctions becomes increasingly incomplete as we travel back in time. Hence, the data will naturally show an increase in the rate of extinctions over time, even if none has occurred.

As explained by the International Union for Conservation of Nature—which is the authors’ source for the data in this graph and the world’s leading authority on modern species extinctions—the count of documented extinctions over the past 500 years “grossly underrepresents the number of extinctions that have taken place in historic times, due to very incomplete and uneven sampling, both geographically and taxonomically.”

The reason that sampling and counts of extinctions are so incomplete for historic times is obvious: Mankind did not have scientific knowledge, technologies, or financial resources to conduct the type of exploration and documentation that we do in modern times.

In fact, scientists have only just begun to thoroughly catalog the world’s living species, thus enabling them to obtain more inclusive counts of extinctions. As the Associated Press reported in 2007, a “worldwide scientific effort to catalog every living species” was only “six years into the program.” A scientist involved in the project explained, “Many are surprised that, despite over two centuries of work by biologists and the current worldwide interest in biodiversity, there is presently no comprehensive catalog of all known species of organisms on Earth.”

In sum, the chart above does not prove that extinction rates increased over the last two centuries but that technological advances since the industrial revolution have enabled scientists to do a progressively better job of recording extinctions than in the past.

Another graph—this one appearing on the first page of the paper—suffers from a similar but worse flaw. It purports to show a dramatic spike in land animal extinctions in the past 500 years relative to thousands of years beforehand: 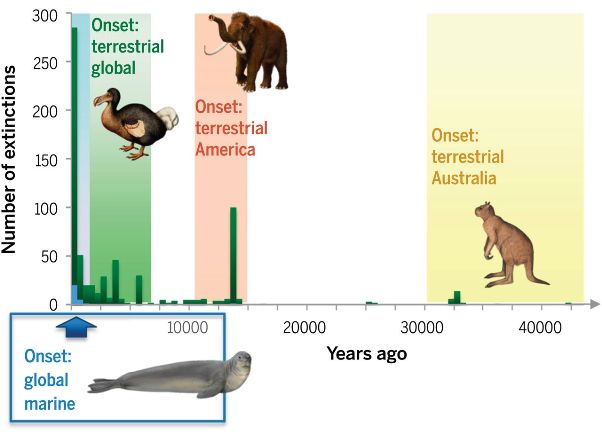 The problem with this graph is that before 500 years ago, extinction rates are approximated from studying fossils, which is a notoriously unreliable method of measuring extinction rates. As explained in the textbook Biodiversity and Environmental Philosophy, the “benchmark for assessing the severity of the current extinction rate” is called “background extinction rate,” which is “estimated from the fossil record” and is “generally accepted” to be “about one species per year.” The textbook then reveals that no “serious” attempt has been made to “judge the reliability” of this figure, because the “uncertainties at each stage of the calculation” would make the effort worthless. It also states, “Probably no one will be surprised if this estimate is off by a factor of 10 or even 100.”

Two important points arise from the details above: First, extinction rates based upon fossils are highly uncertain. Second, the above graph systematically understates the accepted background extinction rate of one species per year. In this chart, each vertical bar covers a period of about 500 years, and hence, the accepted background extinction rate would amount to 500 extinctions for each bar. This is roughly the same as the modern extinction rate displayed in the graph. Yet, the graph shows absolutely no extinctions for almost all of the older 500-year periods. Thus, it conveys the impression that thousands of years regularly elapsed without a single animal species among millions ever going extinct. This has the effect of making the recent number of extinctions look misleadingly large by comparison.

Other evidence suggests that the modern rate of extinctions is modest and unalarming. In 1977, President Jimmy Carter tasked the EPA, State Department, National Science Foundation, and several other federal agencies to produce a “study of the probable changes” to the “world’s population, natural resources, and environment” up through the year 2000. This turned into a herculean effort, involving hundreds of people, including “informal advisors” to the study representing the world’s leading environmental institutions. Among the many scholars in this list of advisors is John P. Holdren, who now serves as President Obama’s science czar.

In 1979, this dream team of scientists released The Global 2000 Report to the President of the U.S., which stated that under current policies and continuing technological progress, “at least 500,000-600,000” species “will be extinguished during the next two decades.”

How close did this projection come to reality? Per a 2004 report by the International Union for Conservation of Nature, “At least 27 species are recorded as having become Extinct or Extinct in the Wild during the last 20 years (1984–2004).” The report notes other extinctions may have occurred, such as “eight species of birds,” but more research is needed to be certain.

Accounting for the fact that even modern extinction counts are not totally inclusive, even if 100 species went extinct in this period, the official government projection overshot the actual loss by 500,000 percent in just 20 years. Nonetheless, the authors of the paper in Science are insisting that the earth is undergoing an epidemic of land animal extinctions.

The authors admit there are no documented global extinctions of any marine animal for the past 50 years, but they maintain that “complacency” is “ill-advised” because of the recent spike in land extinctions and the chance that a similar trend is occurring in the oceans. Besides the fact that this spike may not even exist, the authors’ assumption that ocean extinctions may mirror the number on land is belied by data in a paper in the journal Diversity and Distributions.

This 2011 paper revealed that among the 190 documented extinctions of land-dwelling mammal and bird species since 1500 AD., only nine of them (six birds and three mammals) lived on major continents. The rest lived on islands, where populations are generally small and tightly restricted by physical boundaries. This represents a materially different situation from the oceans, where creatures can often roam widely. Marine creatures are restricted by environmental boundaries (such as temperature and salinity), but these are generally not as abrupt or unforgiving as the physical edges of islands. This casts serious doubt on the analogy between land and ocean extinctions drawn by the authors of the Science paper.

The habit of embellishing environmental threats is an ongoing problem among scientists and environmentalists, and this is recognized within this community. In a 2008 paper in the journal Endangered Species Research, Grahame J. W. Webb of the School of Environmental Research at Charles Darwin University in Australia documented that:

Overstating the risks of wildlife becoming extinct tends to be justified on the basis of the Precautionary Principle: better to overstate than understate risks. But in science, precaution means avoiding speculative conclusions drawn improperly from data. For most scientists, deliberate and gross exaggeration amounts to deception, which is considered unprofessional, unethical and shortsighted. …

Yet scientific precaution often clashes with the goals of advocacy… Exaggerating risks of extinction, whether ethical or not, is an effective political strategy for achieving conservation outcomes and the end justifies the means in the eyes of many. (Citations omitted)

Webb further explained that scientists who officially designate species as “endangered” are “often beneficiaries” of funding that flows as a result of these designations. Thus, “the potential for self-serving assessments has long been recognized.”

Environmentalists, government officials, and the innovators and laborers who produce new technologies deserve credit for making quantitative strides in improving the environment, particularly in the U.S. and other Western nations. Yet, the majority of Americans are unaware of these improvements, because individuals with public platforms have drastically overstated environmental risks and conditions, as in this Science paper.

This state of affairs may help environmental groups organizations raise money or help certain politicians get elected, but it inevitably misdirects attention and financial resources away from solving genuine problems, whether they be environmental or otherwise.