Presidential candidate and U.S. Senator Bernie Sanders has unveiled a plan that he says will create “an education system that works for all people, not just the wealthy and powerful.” In it, he portrays the U.S. education system as grossly underfunded and racially biased, but the statements he makes to support these notions are misleading or explicitly false.

Sanders repeatedly blames the “re-segregation of our K–12 schools” for the poor academic performance of black and Latino students. He bases this claim on an article in the New York Times, which declares that “nonwhite and low-income students who attend integrated schools perform better academically,” but there is a “long history of white resistance to desegregation efforts,” and “school secession movements—in which parents seek to form their own, majority-white districts—are accelerating.”

The Times article is primarily based on a report from the UCLA Civil Rights Project. Buried 21 pages deep in that report is the fact that “the share of intensely segregated white schools, that is, schools that enroll 90–100% white students, has declined from 38.9% in 1988 to 16% in 2016.” In plain language, “white” schools have become more integrated, which deflates the storylines of the Times and Sanders.

What explains those divergent trends? As the report states, “the driving force” is “an enormous increase in the Latino population.” Since 1970, the portion of K–12 students who are Latino increased from 5% to 26%, while the portion who are white dropped from 79% to 48%.

Hence, the “re-segregation” that Sanders condemns is not caused by racism that he says is rampant but by immigration policies endorsed by the Democratic Party. These include increasing levels of legal immigration, allowing illegal immigrants to stay in the U.S., and incentivizing low-income foreigners to immigrate by supplying welfare benefits “regardless of immigration status.”

Due to such policies, more than 40 million immigrants now live in the U.S., and 54% of Mexican and Central American immigrants aged 25–64 don’t have a high school diploma or GED, as compared to 7% of people born in the USA. These individuals have limited earning power and congregate in poor neighborhoods. These factors increase the portion of schools that are populated mainly by students of color.

In sum, both “white” and “non-white” schools are becoming less white due to immigration. Yet, Sanders casts this as a racial injustice that harms students of color.

Sanders also claims that “in America today, most school districts are funded out of local property tax revenue, resulting in unconscionable inequalities.” In reality, data from the U.S. Department of Education shows that only 36.4% of all public school revenues come from local property taxes.

Sanders’ statement was true more than half a century ago, but since then, state governments have paid a growing share of the education expenses of low-income school districts in order to equalize their funding with higher-income districts.

Consequently, school districts with high portions of non-white students have spent about the same amount per student as districts with mostly white students since the early 1970s. This is confirmed through studies conducted by the left-leaning Urban Institute, the U.S. Department of Education, Ph.D. economist Derek Neal from the University of Chicago, and the conservative Heritage Foundation.

Likewise, Sanders blames a lack of funding for the low academic performance of K–12 students in the U.S. compared to other developed nations. He says that “we desperately need” to spend more money “to make our public education system the best in the industrialized world, not one of the poorest.”

Importantly, U.S. fourth graders rank in the top 30% of nations for both reading and math, which shows that they are not lacking in ability. However, by the age of 15, they drop to the bottom 50% in reading and to the bottom 20% in math.

These facts refute Sanders’ assertions that U.S. students cannot compete with other nations without greater spending and universal childcare/preschool, which he wants taxpayers to provide “to all children six weeks old through kindergarten.”

Continuing his push for more spending, Sanders says: “Over the past decade, states all over America have made savage cuts to education.” Yet, data from the U.S. Department of Education shows that average inflation-adjusted spending per public school student is near an all-time high: 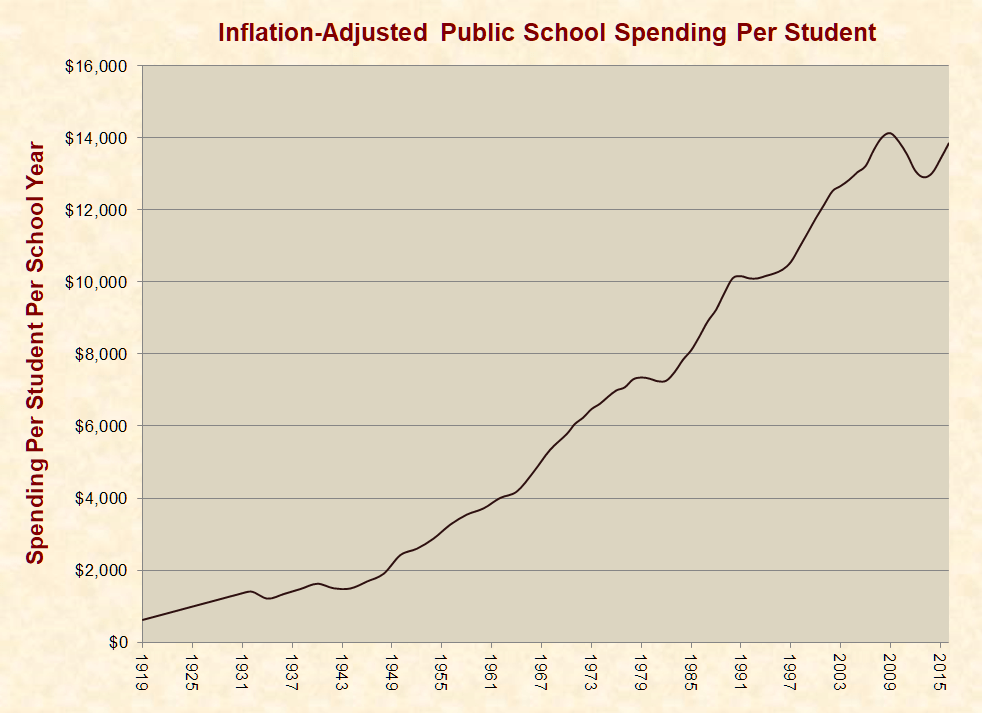 As detailed in the chart above, the latest data, which is for 2016, shows spending per student that is 2% below its peak in 2009. This is on the heels of a post-recession dip that occurred after average spending grew by 24% over the prior decade, 3.8 times since 1960, and more than 22 times since 1919.

By cherry-picking a baseline of exactly 10 years ago, Sanders hides this multiplicative growth in education spending. 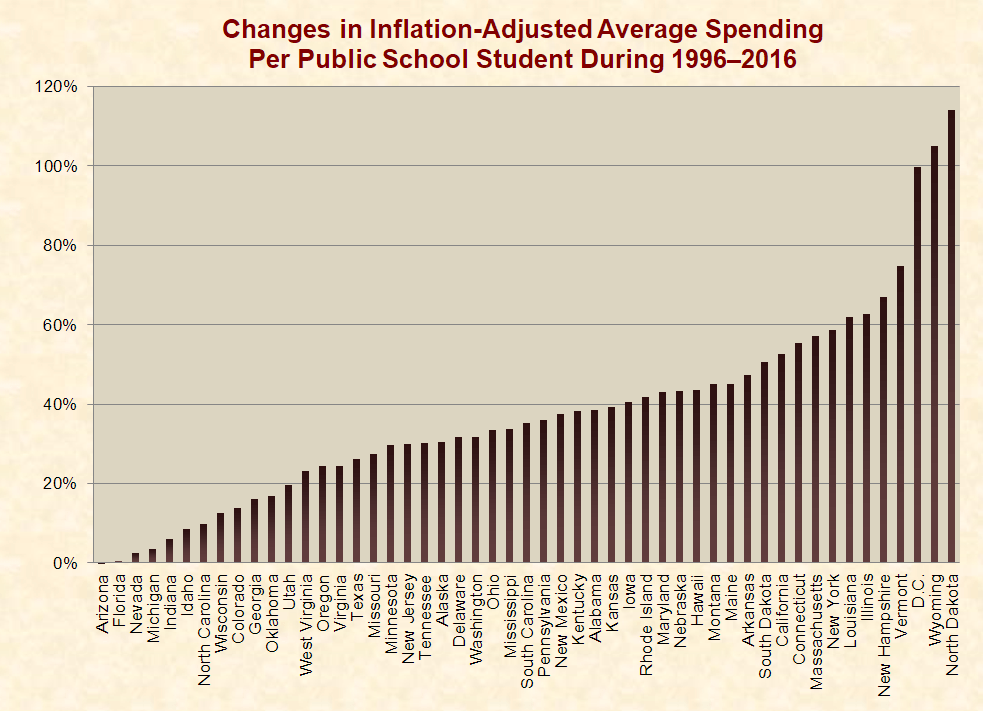 In other words, virtually all states have maintained or increased their inflation-adjusted education spending per student over the past generation, most of them by more than 30%. This is on top of multiplicative increases over previous generations.

Due to the rhetoric of Sanders and others, many voters have become grossly misinformed about education spending. In a 2018 scientific survey, 57% of voters, including 69% of Democrats and 46% of Republicans, said they think public schools spend an average of less than $150,000 per classroom per year. The actual figure is $332,000, and this doesn’t include the costs of state government administration, unfunded pension liabilities, and non-pension post-employment benefits like healthcare.

Thus, more than half of voters think that public schools spend less than half of what they actually spend per classroom.

Sanders’ declares that “the quality of a child’s education should not and cannot depend on their zip code,” but his plan entrenches this situation by denying poor parents the opportunity to choose the best schools for their children.

Under the current status quo, the quality of students’ education is often determined by their parents’ income. This is because wealthy parents can afford to send their children to private schools and live in neighborhoods with the best public schools. Such options narrow as income declines, and the children of poor families—who are often people of color—have few choices. Hence, they typically attend schools with the poorest math and reading scores, the worst discipline problems, and the highest levels of violence.

A ticket out of these conditions is school choice, which financially allows parents to select the schools their children attend, regardless of whether they are public, private, or charter. Sanders is “strongly opposed“ to giving parents this option. He says this is because private and charter schools “are led by unaccountable, private bodies, and their growth has drained funding from the public school system.” These are common talking points of teachers’ unions, but the facts show otherwise.

Private and charter schools are subject to the most direct form of accountability, which is accountability to students and parents. With school choice, if parents are unhappy with a school, they have the ability to send their children elsewhere. This makes every school accountable to every parent.

Public schools, in contrast, are accountable to politicians. If parents are unsatisfied with a school, they are stuck with it unless they can overturn the political order in their community. That changes with school choice because it empowers all parents to make what they consider to be the best choices for their children.

Beyond improving the academic outcomes at public schools, school choice also increases their spending per student, which is the primary measure of education funding. As explained by Stephen Cornman, a statistician with the U.S. Department of Education’s National Center for Education Statistics, per-pupil spending is “the gold standard in school finance.”

Certain school costs like building maintenance are fixed in the short term, and thus, the savings of educating fewer students occurs in steps. This means that school choice can temporarily decrease the funding per student in some public schools, but this is brief and slight, because only 8% of public school spending is for operations and maintenance.

Sanders neglects to mention the main group that actually loses money under school choice. This is teachers’ unions, which collect fewer dues because private schools are less unionized than public ones. This financially harms Democratic politicians, political action committees, and related organizations, which have received more than $250 million in reported donations from the two largest teachers’ unions since 1990. Unions also give many unreported donations to Democratic Party causes.

In short, Sanders’ rationalizations for opposing parental choice are canards. Just the opposite of what he says, parental choice improves the performance and funding of public schools.

While 39% of U.S. students receive federally subsidized free or reduced-price lunches each school day, Sanders calls for more government spending on school meals. He says that “in America today, one in every six kids goes hungry.” This false statistic exaggerates the actual hunger rate by more than 100 times.

Per the latest data from the USDA, less than one-fifth of one percent (0.14%) of households with children have any child who experiences hunger on an average day. This includes children who are hungry due to poverty, not those who skip meals because they are late for school, don’t feel like eating, or are trying to lose weight.

People who declare that child hunger is far more common than that often falsely equate the term “food insecurity” with “hunger.” As the USDA explains, “low food security” means “reports of reduced quality, variety, or desirability of diet” but “little or no indication of reduced food intake.” Prior to 2006, the USDA’s label for such households reflected this fact—it was called “food insecurity without hunger.”

Sanders supports his statement by linking to a report from “No Kid Hungry,” a group that wants to make the federal government pay for breakfast, lunch, after-school, and summer meals at “every school across the country.” This report uses an artful phrase called “facing hunger” to arrive at its “1 in 6” statistic. Like food insecurity, facing hunger doesn’t mean hungry. Based on such rhetoric, the report claims that “hunger affects children in every community, including affluent suburbs.”

According to Bernie Sanders, the core problems of the U.S. education system are racism and underfunding. Yet, his attempts to support those views are misleading or completely unhinged from reality. This includes his claims about racial segregation, funding inequalities, international comparisons, historical school spending, parental choice, and hunger. In all of these cases, Sanders deceives the public.

Those farces have critical implications because they can lead people to make misinformed decisions that harm children. Furthermore, they could spur the misallocation of resources and attention away from genuine problems and to fictitious ones.

Correction (12/2/19): An earlier version of this article incorrectly stated that “the U.S. spends 30% more per public school student than other developed nations.” It actually spends 35% more.