Based upon two new papers in academic journals, media outlets have been reporting that the world’s oceans are overwhelmed with plastic waste. However, as detailed below, the documented amount of plastic in the world’s oceans is the equivalent of placing a microscopic speck of plastic weighing less than one-thousandth of an ounce into this Olympic-sized swimming pool containing 660,000 gallons of water: 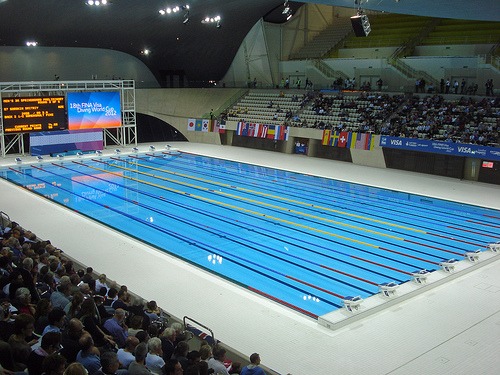 The papers in question were published in the journals PLoS ONE and Science. Numerous media outlets and organizations reported on these papers with cataclysmic headlines, such as:

“World’s oceans clogged by millions of tons of plastic trash.”
– Will Dunham of Reuters

These claims and others like them are rooted in alarmism enabled by the papers’ authors, who neglected to provide a tangible, objective context for their findings and then exaggerated them by making dire, subjective statements to the press. The authors of the Science paper also misused data to produce one of the key foundations of their study.

In the PLoS paper, the authors estimated that there is 269,000 metric tons of plastic waste floating in the world’s oceans. This figure is 8 to 38 times more than an estimate published six months earlier in the Proceedings of the National Academy of Sciences. Without dissecting the competing methods used in each of these papers, even if one blindly assumes that the higher figure is more accurate, this much plastic is equal to just 0.00000000002% of the mass of the world’s oceans.

For a striking comparison that illustrates the minuteness of that number, the average concentration of uranium in the human body is 400,000% higher than this. For another point of comparison, it is the equivalent of placing 1/60,000th of an ounce of plastic into an Olympic-size swimming pool containing more than five million pounds of water.

The PLoS authors assert that their “estimates are highly conservative, and may be considered minimum estimates.” Yet, even if there were 100 times more plastic in the oceans than they estimated, the average plastic concentration would still be more than 1,000 times lower than the EPA’s standard for drinking uranium-laced water on a regular basis.

Nevertheless, the lead author of the paper told a reporter from USA Today, “There’s a lot of waste out there,” and the reporter in turn declared that the oceans are “teeming with” plastic that weighs “three-quarters as much as the Empire State Building.”

Such statements are unscientific and misleading, because they ignore the most fundamental principle of toxicology, which is that the dose makes the poison. It is not the total amount of a pollutant that makes it harmful, but its concentration—or how much there is relative to the space or mass in which it is located. This fact is so vital and basic that a middle-school science guide on water pollution explains it. Yet, the authors of this paper overlooked this matter, as did certain journalists.

Plastic is not evenly distributed in the oceans, and thus, concentrations are higher in some areas than others. Because plastic is often buoyant, and because the oceans have massive regions of circular currents called “gyres,” plastic tends to drift towards the centers of these regions. This is where the primary data used in the PLoS paper was gathered, but the authors don’t even attempt to show that these regions have enough plastic to cause harm to any element of the environment.

As with most environmental issues, one can point to anecdotes (like a beach strewn with plastic) to argue that there is a crisis, but isolated examples don’t prove there is a global or even regional problem, as the paper’s authors and media have suggested.

Not all plastic in the oceans can be readily measured. Some of it sinks, and some of it is biodegraded by microbes and eaten by wildlife. Hence, the authors of the PLoS and Science papers claim that there must be far more plastic in the oceans than anyone has ever estimated. For example, the Science paper concluded that 4.8 to 12.7 million metric tons of plastic waste flow from the land to the ocean each year. These figures are 17 to 47 times higher than the amount of plastic floating in the oceans calculated in the PLoS paper.

The authors of the Science paper produced their estimates by employing a series of assumptions to calculate that an average of 5% to 13% of all plastics used within 31 miles of every coastline in the world ends up in the oceans every year. Perhaps realizing that these figures would be greeted with skepticism, the authors never directly revealed them in their paper or press conference. Instead, this essential element of the study must be calculated from information in the paper, which is located behind a paywall.

Worse still, the authors misapplied one of the key pieces of data used to produce their results. In a file of supplementary information (also behind a paywall), they claim that 4.17 million metric tons of litter were generated in the U.S. during 2008. However, the source that they cite for this figure does not state this. Instead, it states that this much litter “is collected each year” in the U.S. by governments, businesses, and educational institutions.

By definition, litter that is “collected” is not litter that can flow into the oceans. Yet, the authors used this figure to calculate litter rates throughout the world and then assumed that 15% to 40% of all litter generated within 31 miles of the world’s coastlines ends up in the oceans each year. When Just Facts questioned the lead author of the study about this, she wrote that they “used the best available data we could find to produce our order of magnitude estimate….” This statement does not address the fact that this data is for litter that has been collected, which is clearly not litter that can flow to the oceans.

During their press conference, one of the coauthors of the Science paper stated that “any plastic in the ocean is too much.” This kind of rhetoric feeds a common misconception about pollution, which is that natural substances are inherently better for the environment than synthetic ones. The academic book Molecular Biology and Biotechnology: A Guide for Teachers aptly dispels this notion:

Many people are frightened by the use of synthetic chemicals on food crops because they have heard that these chemicals are “toxic” and “cancer causing,” but are all synthetic chemicals more harmful than substances people readily ingest, like coffee and soft drinks? No…. For example, in a study to assess the toxicities of various compounds, half of the rats died when given 233 mg of caffeine per kg of body weight, but it took more than 10 times that amount of glyphosate … which is the active ingredient in the herbicide Roundup, to cause the same percentage of deaths as 233 mg of caffeine.

Likewise, the Cambridge University Press textbook Understanding Environmental Pollution emphasizes that “anything is toxic at a high enough dose,” and “potentially toxic substances are found in anything that we eat or drink,” including natural items like potatoes and even pure water itself. Again, the dose makes the poison.

The misinformation unraveled above concurs with the findings of a recent article published in the journal BioScience. In this article, eight PhD-level environmental scientists explained that certain scientists and journalists have created “the perception of ocean calamities in the absence of robust evidence.”

After documenting that this happens, the authors discussed how and why it happens. To summarize their findings, the underlying causes boil down to personal and intellectual biases, careless research, political pressures, dishonesty in the pursuit of “righteous ends,” and the desire for recognition and career advancement.

Whether or not such thought processes animated the publication and propagation of these PLoS and Science papers is unknown. Regardless, the anxiety over plastic in the oceans that these individuals have spread is not supported by the evidence they presented.

10 thoughts on “Are the Oceans Plagued by Plastic?”