A Washington Times editorial declares, “Time to stock up on light bulbs: Government ban on mercury-free fixtures takes effect Jan. 1.” Contrastingly, NPR calls such statements “rumors” and says that incandescent bulbs will merely be more efficient—and the only difference we’ll notice is that our electric bills will be lower.

Reality falls between these two competing claims. To be precise, on 1/1/12, a provision of federal law will effectively ban the manufacture of standard incandescent bulbs, starting with the 100-watt bulb in 2012 on down to the 40-watt bulb in 2014. Other types of incandescent bulbs can meet these efficiency requirements, but they cost multiplicatively more than standard bulbs. On the other hand, the electricity savings from using these bulbs typically outweigh the added initial purchase costs.

Also, by no later than 2020, the same law requires “more stringent standards,” which high-efficiency incandescents cannot currently meet, thus making the mercury-filled compact florescent lights (CFLs) the presumptive standard. Media coverage has been virtually devoid of this fact. The following lays out the details.

At issue here is the Energy Independence and Security Act of 2007, which passed Congress with 97% of Democrats voting for it and 76% of Republicans voting against it (see House and Senate vote records). It was then signed into law by Republican President George W. Bush.

Between 2012 and 2014, standard A-line 40- and 100-watt incandescent light bulbs must use 30% less energy, but produce the same light output as the incandescent bulbs most of us use today.

What does this mean for me?

While you won’t be required to throw out your existing bulbs, you may be surprised when trying to find the same replacements at the store. After 2012, you’ll find that these bulbs will have to be replaced with energy-efficient options, such as Halogen, CFL and LED light bulbs.

More directly, a technical report from a state and local initiative facilitated by the U.S. Department of Energy states that “in essence,” the law begins “the phase out of standard incandescent bulbs. In 2012, 100 W incandescent bulbs will no longer be manufactured, followed by restrictions on 75 W in 2013 and 60 W in 2014.”

GE Lighting states that the “most common alternative to incandescents used today is the CFL. While the upfront investment is more for these bulbs, the cost is more than offset in money savings and product longevity.” However, besides being visually unappealing to many people, CFLs 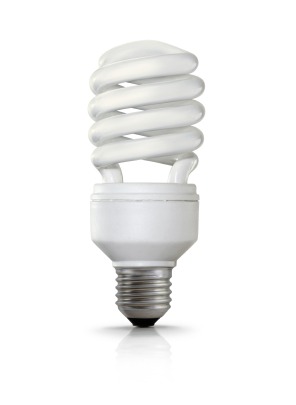 • can lose significant brightness after minimal use.
• are not meeting their advertised cost savings in the real world.
• produce “less color quality” than standard bulbs, leaving consumers “dissatisfied—and rightfully so,” in the words of a CFL advocate and professor at the California Lighting Technology Center at the University of California, Davis.
• have enough mercury in them that the EPA recommends shutting down your home’s  HVAC system and undertaking extensive cleanup measures if one of these bulbs should break.

Halogen incandescent bulbs do not contain mercury, are functionally and visually equivalent to standard incandescents, and can meet the new efficiency regulations, although not all of them do. For example, the Philips 72-watt EcoVantage Natural halogen bulb puts out 1,200 lumens of light, which does not meet the law’s standard of 1,490 lumens for a bulb of this wattage. GE makes a 72-watt halogen bulb that just meets the standard. The price for a two-pack of these at my local Walmart is $3.58 or $1.79 per bulb.

This price data must be balanced with the reality that energy-efficient bulbs often have hidden costs that we pay through our taxes, because they are subsidized by state governments and the federal government through green energy subsidies. This is one of the ways in which General Electric managed to pay no U.S. corporate income taxes in 2010 while earning $5.1 billion in profits from its operations in the United States.

With regard to LED bulbs, these are still prohibitively expensive for most applications. This year, Osram-Sylvania unveiled a prototype LED that puts out the same amount of light as a 100-watt standard incandescent. Pricing is not yet available, but the 60-watt equivalent of this bulb currently costs $34.98 for a single bulb at Amazon.com. Nevertheless, because LEDs have extremely long service lives, they can be cost-effective when installed in hard-to-access locations where the expense of paying someone to the replace the bulbs is high.

Although virtually unmentioned by the media, possibly the most demanding aspect of these light bulb dictates is a provision that authorizes the Secretary of Energy to make “more stringent standards” than those detailed above. Moreover, if the Secretary does not do this of his own accord, the law contains a “backstop requirement” that demands a “minimum efficacy standard of 45 lumens per watt” for all “general service” bulbs by 2020. The energy-efficient 72-watt GE halogen that we just examined produces only 21 lumens per watt (1490/72), which falls far short of this requirement.

As explained in the technical report cited above, this mandate essentially makes “CFLs the baseline.” This means that without a major technological advance, consumers may have no choice but to purchase either highly expensive LEDs or mercury-laden CFLs with poor color quality and subpar performance.