After a live microphone captured President Obama asking Russian President Medvedev to transmit a message to Vladimir Putin that it is “important for him to give me space” on missile defense until after the upcoming election, “Obama avowed that he is not hiding his intentions from the American people:

The only way I get this stuff done is if I’m consulting with the Pentagon, with Congress, if I’ve got bipartisan support. And frankly, the current environment is not conducive to those kinds of thoughtful consultations. This is not a matter of hiding the ball.

Contrary to this assertion, the president has authority as the Commander in Chief of the U.S. military to make unilateral decisions about many aspects of missile defense. Obama did this in 2009 when he decided to cancel U.S. plans to deploy missile interceptors in Poland, a decision that Putin praised as “very right and brave.”

Casting further doubt on Obama’s explanation, his remark to Medvedev—“This is my last election. After my election I have more flexibility”—conveys that he will not be as concerned with the political consequences of any actions he will take after the election.

Many media outlets are reporting on this incident without offering significant context about the involved parties and their records on missile defense. Thus, Just Facts is providing a chronological list of facts regarding these matters:

* In 2001, Obama told a Chicago television station, “I, for example, don’t agree with a missile defense system.” (Video)

* In 2007, Obama made a videotaped statement for an organization opposed to missile defense, declaring that, “As president,” “I will cut investments in unproven missile defense systems. I will not weaponize space. I will slow our development of future combat systems.” (Video)

* On November 8, 2008 (4 days after Obama’s election), Obama’s senior foreign policy adviser, Denis McDonough, stated that the president-elect “supports deploying a missile defense system when the technology is proved to be workable.”

* On April 06, 2009 (two and half months after Obama took office), the Department of Defense announced that it was cutting the Missile Defense Agency program by $1.4 billion, cancelling the planned deployment of additional ground-based missile interceptors in Alaska, and halting two other missile defense efforts: the Airborne Laser Prototype Aircraft and the Multiple Kill Vehicle program. 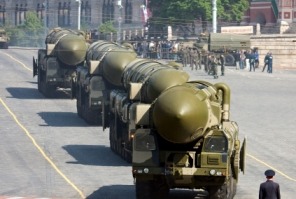 * On the day that Obama and Medvedev signed the START II treaty, the Russian government issued an official statement stressing that the treaty “can operate and be viable only if the United States of America refrains from developing its missile defense capabilities quantitatively or qualitatively.”

• Obama sent a letter to the US Senate asserting, “The New START Treaty places no limitations on the development or deployment of our missile defense programs.”
• Senate Democrats defeated a Republican proposal to remove the language from the treaty that specifies an “interrelationship between strategic offensive arms and strategic defensive arms….”
• the U.S. Senate approved the START II treaty, with 100% of Democrats voting for it, and 67% of Republicans voting against it.

* In February 2011, Russia’s Deputy Foreign Minister, Sergei Ryabkov stated, “If the U.S. increases the qualitative and quantitative potential of its missile defense, Russia may respond with “military-technical measures.”

* On May 18, 2011, Medvedev threatened to develop “our nuclear strike potential” if he cannot “work out a model for cooperation in anti-missile defense” with “my colleague and friend President Obama.”

* On March 26, 2012, shortly after Vladimir Putin was elected president of Russia under a cloud of electoral fraud, Obama had the following conversation with outgoing president Dmitry Medvedev while unaware that a microphone was recording them:

Obama: “On all these issues, but particularly missile defense, this can be solved but it’s important for him [Putin] to give me space.”

Obama: “This is my last election. After my election I have more flexibility.”

Medvedev: “I understand. I will transmit this information to Vladimir.”

Leave a Reply to washed one Cancel reply