During his acceptance speech at the Republican National Convention, Donald Trump stated that “household incomes are down more than $4,000 since the year 2000.” Many “fact checkers” of Trump’s speech declared this statement to be true, including those of the New York Times, PolitiFact, Vox, and NPR.

In reality, the data cited by Trump and these media outlets excludes 24% of household income. More comprehensive data recently published by the Congressional Budget Office (CBO) reveals that median household income has climbed by $5,000 since the year 2000.

In June of 2016, CBO released a report that details inflation-adjusted household incomes over the past several decades. This data shows that median household income rose by $5,000 between 2000 and 2013 (the latest available data). This occurred in spite of the fact that household income has stagnated since the Great Recession of 2007–2009. These trends are even more vivid when subtracting out federal taxes in order to estimate take-home income: 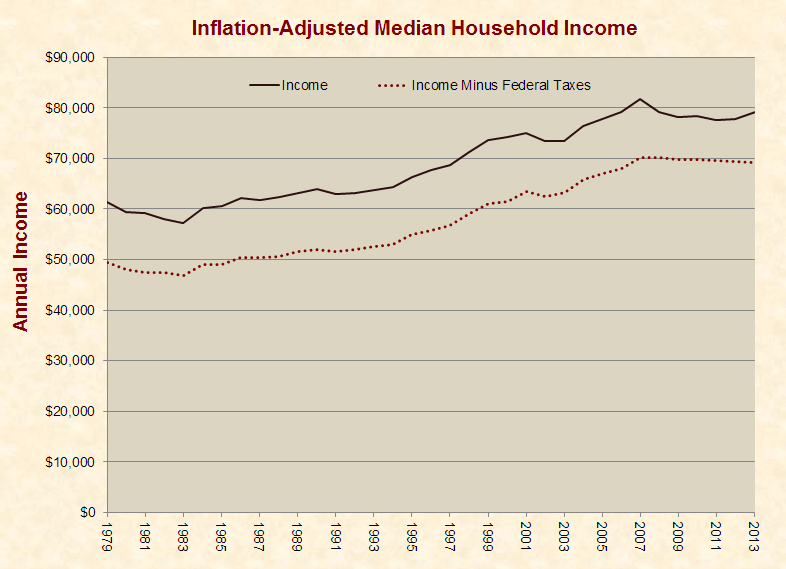 Unlike the source cited by Trump and the media, CBO accounts for nearly all forms of income in its analysis, including wages, capital gains, Social Security, and unemployment insurance, as well as non-cash benefits like food stamps, Medicare, and employer-provided health insurance.

Also unlike the source cited by Trump, CBO uses multiple sources of data to achieve accuracy, including:

Nevertheless, such economic data is almost always imperfect, and CBO notes that its analysis:

To account for inflation, CBO uses the Personal Consumption Expenditure price index. This index tends to show slightly less inflation than the commonly used Consumer Price Index. CBO considers the Personal Consumption Expenditure price index to be more accurate, in part, because “it more fully accounts for the adjustments that consumers make to their spending patterns as some prices change relative to other prices.”

The income figures cited by Trump and the media come from the U.S. Census Bureau’s Current Population Survey. This data indeed shows that inflation-adjusted median household income declined by $4,000 between 2000 and 2014 (the latest available year).

However, the data is incomplete and misleading if used uncritically. In the words of the Census Bureau, this is because it:

After listing these caveats and others, the Census Bureau warns that “data users should consider these elements when comparing income levels. Moreover, readers should be aware that for many different reasons there is a tendency in household surveys for respondents to underreport their income.”

Likewise, CBO uses this Census data as a supplementary source for its income analysis but explains that it is not a comprehensive measure of income. CBO notes that while the tax return data it uses as its primary source and the Census data each have limitations, together, “the two sources can form a more complete picture.”

This larger picture becomes especially important when comparing income over extended periods, because the Census data’s shortcomings accumulate over time. For example, the sources of income excluded by the Census survey have become increasingly significant over the past decades, growing from 15% of middle-class household income in 1979 to 24% in 2013. This causes the Census data to show less income growth than actually occurred. Hence, it should be used thoughtfully and with its caveats explained, especially when it conflicts with more complete sources of data—as it does in this case.

Like many political narratives that diverge from the truth, this particular one serves the interests of those who spread it.

In the case of Trump, it reinforces his assertion that Hillary Clinton “has supported virtually every trade agreement that has been destroying our middle class.” Along the same lines, Trump says that “powerful special interests” have “rigged our political and economic system for their exclusive benefit,” and he contends he will stop this if voters give him the presidency.

In the case of media outlets like the New York Times and PolitiFact—both of which have records of propagating left-leaning falsehoods—Trump’s claim furthers the notion that the middle class is suffering, and the government should expand social programs to help. It also allows them to say, as PolitiFact did, that Trump’s income “statistic came amid a series of shots at President Barack Obama,” but the “majority of the period Trump was referring to came under the presidency of George W. Bush, a Republican.”

Contrary to these false narratives, the most comprehensive available data on median household income shows that it generally rose for the quarter century preceding the Great Recession of 2007–2009. Since then, it has been nearly flat for as long as this data currently extends.

It is important to note that these facts don’t prove that the economic policies of Bush and previous presidents were better for middle-income households than those of Obama. This is because it is impossible to objectively separate the impacts of a president’s policies from numerous other factors that determine the incomes of Americans.

At the same time, several factors that negatively affect median income have reached record or near-record highs in recent years, and Obama has implemented policies that have contributed to these outcomes. This includes but is not limited to increasing the national debt, propagating regulations, and fostering immigration of low-skilled populations into the United States.