NPR is reporting, “The payroll tax holiday that Congress approved a year ago reduced Social Security’s revenues this year by $145 billion.” Many politicians are making similar statements, but the facts show otherwise.

What is affected, however, is the general fund of the U.S. Treasury, which is not funded with Social Security payroll taxes but with income taxes, corporate income taxes, excise taxes, and other miscellaneous taxes, such as estate and gift taxes. This has important implications because if you classify households by income into five equal groups, only the highest-earning group pays more general fund taxes than social insurance taxes (i.e., payroll taxes). The other four groups of households do not.

So in sum, the payroll tax holiday law transfers money from the general fund of the U.S. Treasury to the Social Security program and thereby redistributes wealth from the highest-earning households to the others. Since Social Security benefits are calculated based upon lifetime taxable earnings instead of actual taxes paid, future Social Security beneficiaries will receive benefits as if they had paid these payroll taxes. However, these revenues will actually come from other federal taxes that on the whole are disproportionately paid by upper-income earners.

The 2010 Social Security Trustees Report (page 150) explains that “Social Security benefits are generally redistributed intentionally toward lower-wage workers (i.e., benefits are progressive).” The graph below shows a measure of this. The 2011 payroll tax holiday effectively makes this curve steeper. 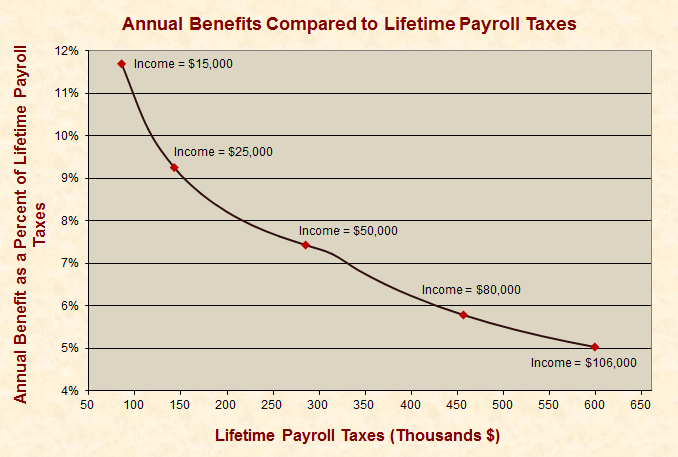