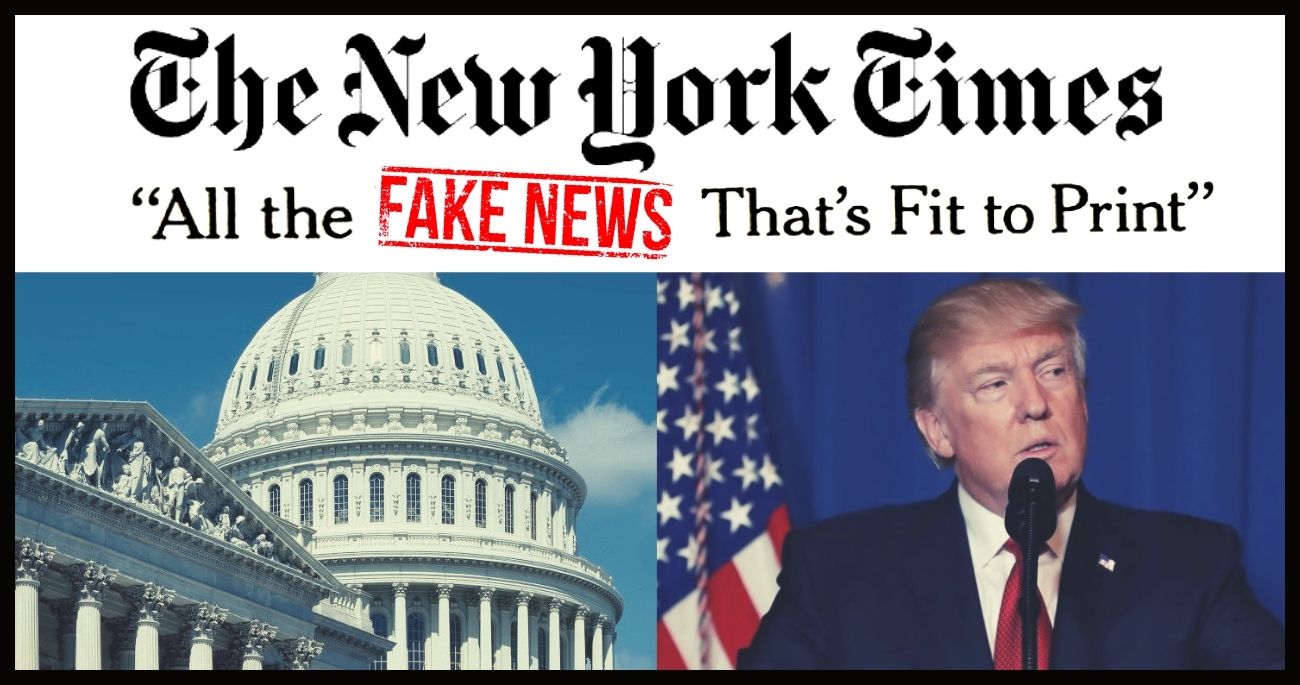 The New York Times has published a “fact check“ by Linda Qui declaring that Donald Trump’s lawyers “made a number of inaccurate or misleading claims” during the Senate impeachment trial. In reality, much of the article consists of flagrant falsehoods propagated by Qui and the Times.

With regard to Trump’s speech on the day of the Capitol Hill riot, Trump attorney Michael van der Veen said: “Far from promoting insurrection against the United States, the president’s remarks explicitly encouraged those in attendance to exercise their rights peacefully and patriotically.”

That statement is demonstrably true, as the transcript of the speech shows that Trump asked his supporters to go “to the Capitol building to peacefully and patriotically make your voices heard.” Qui, however, alleges that his attorney’s statement “is exaggerated” because Trump “used the phrase ‘peacefully and patriotically’ once in his speech, compared with 20 uses of the word ‘fight’.”

Qui’s argument presumes that Trump used the word “fight” to denote physical violence. This mimics the Democrat’s impeachment resolution, which declares that Trump is guilty of “inciting violence” because he said in his speech: “if you don’t fight like hell, you’re not going to have a country anymore.”

However, both Qui and the Democrats are quoting Trump out of context. The transcript shows that Trump never called for violence or even vaguely implied that. In fact, it is glaringly obvious that he was talking about legal and verbal fighting. To wit, 10 of the 20 times in which Trump used the word “fight” are found in these statements:

Highlighting the duplicity of those who claim that Trump’s use of the word “fight” amounts to incitement, Trump’s attorneys showed video footage of numerous Congressional Democrats using the word “fight” more than 200 times, including more than a dozen times in which they used the exact phrase for which they impeached Trump: “fight like hell.”

This is misleading. Mr. van der Veen was most likely referring to John E. Sullivan, a Utah man who was charged on Jan. 14 with violent entry and disorderly conduct. Mr. Sullivan, an activist, said he was there to film the siege. He had previously referred to antifa—a loosely affiliated group of antifascist activists that has no leader—on social media, but he has repeatedly denied being a member of the movement. The F.B.I. has said there is no evidence that supporters of the antifa movement had participated in the Capitol siege.

In short, Qui turned the truth about every major aspect of this matter on its head.

Regarding Trump’s statements about electoral fraud, Trump attorney Bruce Castor stated: “Based on an analysis of publicly available voter data, the ballot rejection rate in Georgia in 2016 was approximately 6.42%. And even though a tremendous amount of new first time mail-in ballots were included in the 2020 count, the Georgia rejection rate in 2020 was a mere four-tenths of one percent. A drop-off from 6.42% to 0.4%.”

Once again, Qui attempts to refute a statement that is entirely true. She does this by alleging:

Georgia elections officials have repeatedly debunked this claim, which conflates the overall rejection rate for mail-in ballots in 2016 to the rejection rate specifically for signature mismatch in 2020. (Ballots can also be rejected for arriving late or not having a signature, among other reasons.)

To the contrary, it is abundantly clear what the 0.4% refers to: the overall rejection rate—just as Castor said. Ballotpedia details the components of this 0.4% figure as follows:

Using raw data from Georgia’s Secretary of State, Just Facts confirmed Ballotpedia’s work and calculated a rejection rate of 0.35% in 2020.

That said, the rejection rate of 6.4% in 2016—used by Castor, Qui, and Ballotpedia—comes from a secondary source (the U.S. Election Assistance Commission) that appears to be inconsistent with the primary source (Georgia’s Secretary of State). Ballotpedia mentions this discrepancy in a footnote and calculates a rejection rate of 2.9% in 2016 using the primary source data. Just Facts confirms that these calculations are accurate.

Qui attacked that truthful statement with the following barrage of misinformation:

This is misleading. Contrary to Mr. Trump’s belief and Mr. Castor’s repetition of it, Georgia does verify signatures. Georgia’s Republican secretary of state noted that the state trained officials on signature matching and created a portal that checked and confirmed voters’ driver’s licenses. In a news conference last month debunking Mr. Trump’s claims, Gabriel Sterling, a top election official in Georgia, explained that the secretary of state’s office also brought in signature experts to check over 15,000 ballots. They discovered issues with two, and after further examination, concluded that they were legitimate.

Neither Castor nor Trump said that Georgia doesn’t verify signatures. Instead, Trump questioned the integrity of the signature verification process in Fulton County, Georgia. This county is a Democratic Party stronghold with an extensive history of corruption.

Moreover, the signature match of more than 15,000 ballots that Qui characterized as “debunking Mr. Trump’s claims” does nothing of the sort. This is because it was performed in Cobb County, not Fulton County. Trump directly addressed this matter in his speech on the day of the riot:

In direct contradiction to a so-called “fact check” by Linda Qui of the New York Times, genuine facts prove the following about the circumstances surrounding Trump’s impeachment trial:

The points above don’t address every falsehood in the fact check, but they reveal a pattern of brazen dishonesty and/or incompetence by the Times.