In a recent Los Angeles Times article entitled “Four facts about the national debt you may not know,” assistant managing editor David Lauter claimed that “the U.S. debt burden is starting to decline. That’s right – it’s going down, not up.”

Likewise, Michael Hiltzik, a Pulitzer Prize-winning business columnist of the Los Angeles Times, soon thereafter wrote that the national debt has “been falling recently as a percentage of gross domestic product and is expected to keep doing so for the next few years at least.”

These statements are demonstrably false, and they are accompanied by other misleading claims that mirror partisan talking points.

First, for clarification, note that Lauter and Hiltzik don’t refer to the full national debt but only to the debt that is “publicly held.” This is a partial measure of the national debt that excludes money owed to federal programs with independent budgets, like Social Security. Lauter and Hiltzik also measure debt as a portion of the nation’s annual economic output (gross domestic product or GDP), which is a common practice among federal agencies and economists. For the sake of consistency, all of the data below on the national debt uses these same measures used by the LA Times.

Both Lauter and Hiltzik linked to reports from the Congressional Budget Office (CBO) as alleged proof for their claims that debt is falling, but as shown in the graph below of CBO data from September 2013, federal debt is currently at the highest levels of the past 50 years and is still growing: 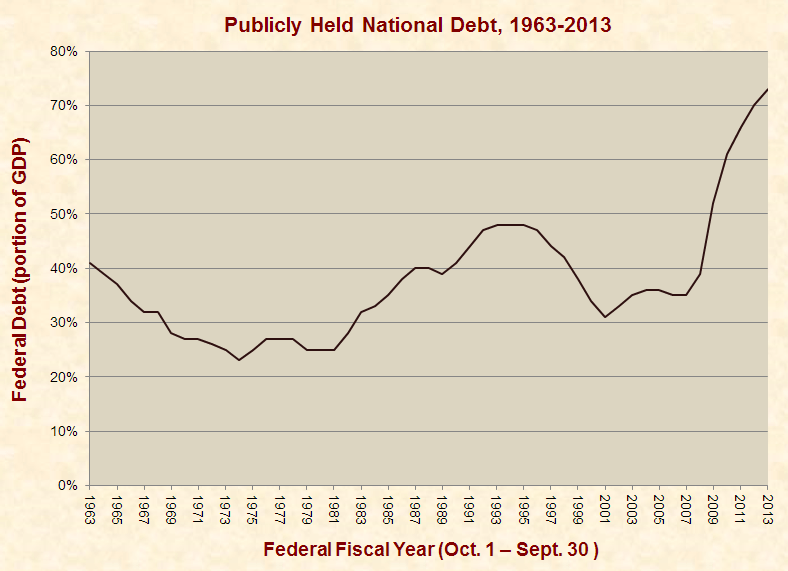 Looking into the future, Hiltzik declared that the debt will keep declining “for the next few years at least,” according to CBO projections. Similarly, Lauter stated that CBO projects the debt will stay level for the next year and then decline by four percentage points by 2018.

Both of those assertions are misleading, and they echo rhetoric used by President Obama and Paul Krugman. The problem with these claims is that they are based on CBO’s “baseline” projections, which employ certain assumptions that require significant changes in current policy.

For example, CBO’s baseline projections assume that Medicare will implement a 25% cut in payment rates to physicians starting on January 1, 2014. This cut is required under a 1997 federal law, but as the 2013 Medicare Trustees Report explains, “it is a virtual certainty that lawmakers … will override this reduction as they have every year since 2003.” This is because Medicare already pays doctors 20% below private insurance rates, and another 25% reduction would cause many doctors to stop accepting Medicare patients, as has occurred with Medicaid.

CBO also produces projections based upon “current policy,” which don’t include the unrealistic assumptions inherent in the claims of Lauter, Hiltzik, Krugman, and Obama. When CBO accounts for the economic effects of taxes, government spending and debt, these projections show the debt growing in 2014, staying level in 2015, declining in 2016 and 2017, and then climbing to unprecedented levels: 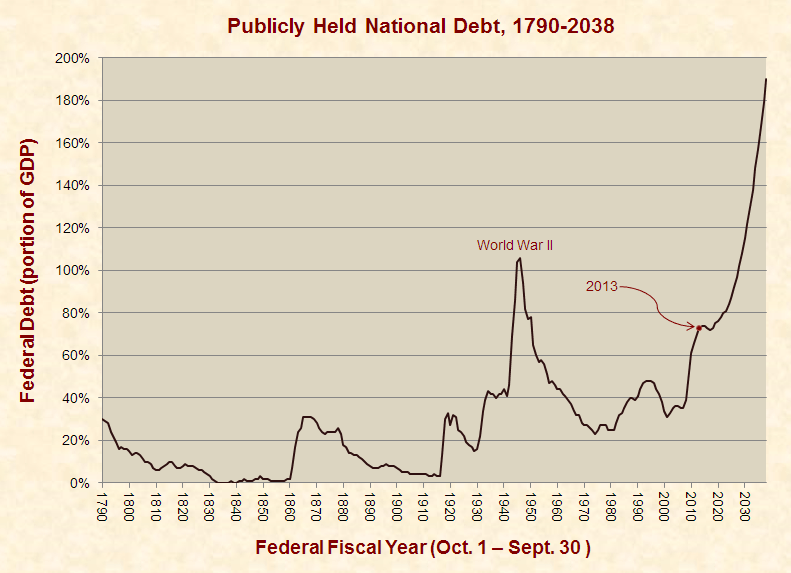 In total, CBO’s more realistic projections show that the federal government’s current policies will leave the next generation of Americans with an escalating debt that permanently dwarfs the previously unprecedented debt spike from World War II.

Because of “unanticipated changes in economic conditions” and “a host of other factors that affect federal spending and revenues,” CBO has emphasized that actual budget outcomes could be different from projections. Nevertheless, CBO has also explained that “under a wide range of possible assumptions about some key factors that influence federal spending and revenues, the budget is on an unsustainable path.”

Another patent falsehood in Lauter’s article is his claim that “the debt grew rapidly during most of President George W. Bush’s tenure and President Obama’s first term as the government borrowed money to fight two wars and the deepest recession in more than half a century. But the rapid growth ended more than a year ago.”

In reality, as the CBO data shown above reveals, the debt grew more rapidly over the recently-ended fiscal year (Oct 1. 2012 – Sept. 30, 2013) than it did in seven of the nine fiscal years that overlapped Bush’s presidency. Also, during one of those two years, Barack Obama was president for more than two thirds of the year. Nevertheless, linking the national debt to any particular president fails to account for the actions of Congress, the impacts of preexisting laws, and numerous other variables.

Finally, Lauter repeats a talking point of Krugman and other left-leaning professors who claim that there is little need for concern over the debt, because rapid economic growth in the wake of World War II indicates that “a large debt doesn’t necessarily strangle an economy.”

What Lauter and the others neglect to mention is that the debt from World War II (1941-1945) was fleeting because it was quickly addressed through drastically reduced government spending. For example, by 1951, federal debt was already 11% lower than our current debt, and federal spending was consuming 27% less of our economy than in 2012.

In contrast, the federal government has currently accumulated more than $67 trillion in debts, liabilities, and unfinanced obligations. This amounts to $215,311 for every person living in the U.S. and is greater than the combined net worth of all U.S. households and nonprofit organizations, including all assets in savings, real estate, corporate stocks, private businesses, and consumer durable goods such as automobiles. As CBO projections show, if the federal government continues its current polices, these liabilities and unfinanced obligations will become concrete debt.

Moreover, politicians and others who have supported increased government borrowing can easily deflect the blame for their actions because the consequences of government debt can manifest in ways that are not obvious to many voters, such as lower wages, weak economic growth, inflation, higher taxes, reduced government benefits, or combinations of such results. In the words of the U.S. Government Accountability Office, “the costs of federal borrowing will be borne by tomorrow’s workers and taxpayers” and “ultimately may reduce or slow the growth of the living standards of future generations.”