At the request of Democratic presidential candidate Bernie Sanders, the U.S. Government Accountability Office (GAO) has published a study about the impact of life expectancy on Social Security benefits. As expected, GAO found that the shorter lifespans of low-income workers reduce the total amount of benefits they receive during retirement. Specifically, people with incomes of $20,000 per year receive “as much as 11 to 14 percent” less benefits “compared to what they would receive if they had an average life expectancy.”

Sanders is trumpeting these results to lobby for increasing benefits for low-income seniors and raising taxes on high-income workers. In every step of his argument, Sanders creates misleading impressions that fuel divisiveness among Americans.

Sanders’ most glaring lapse is his failure to mention that low-income workers receive far higher annual returns on the taxes they pay into Social Security. For example, a person who works for 44 years and earns $20,000/year will receive annual Social Security benefits equal to 11.3% of his lifetime payroll taxes. In contrast, a person who earns $80,000/year will receive only 6.5%. In other words, the low-income worker receives 1.7 times the annual return of the high-income worker. This ratio grows with wage differences: 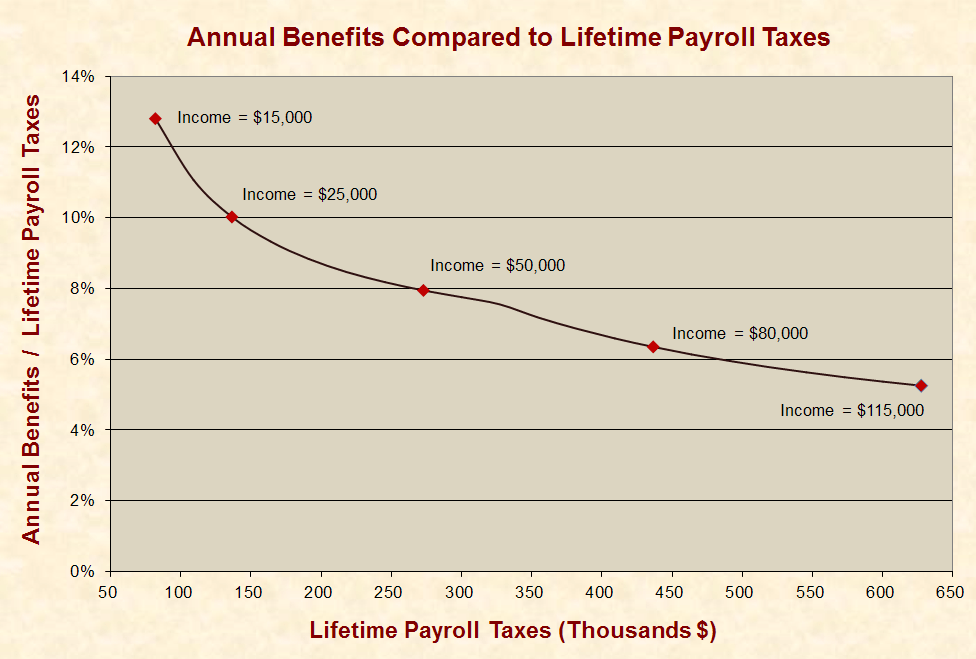 Due to shorter life expectancy, the average $20,000/year worker receives fewer years of benefits, but his lifetime benefits are still about 1.4 times larger than the $80,000/year worker. This critical information is buried in an appendix of the GAO report and dispersed across two graphs. Making such key data inaccessible to readers is a common ploy of academics who mislead their audiences.

Sanders also asserts that the “wealthiest Americans are not only living longer and collecting more in Social Security benefits, they are also contributing less of their income toward Social Security.”

In reality, the wealthy are paying eight times more in Social Security taxes than the federal government promised anyone would have to pay. When the government created Social Security in the 1930s, it published a pamphlet stating that “beginning in 1949 … you and your employer will each pay 3 cents on each dollar you earn, up to $3,000 a year. That is the most you will ever pay.” This amounts to $180 in taxes per year, which, adjusted for inflation, is $1,793 in today’s dollars. Yet, in 2016, the maximum payroll tax per person is 12.4% on earnings up to $118,500. This amounts to $14,694 in taxes per year, or more than eight times the promised maximum.

In sum, high-income workers are negatively impacted by Social Security, and this has become worse over time. In the words of a Congressional Budget Office report on Social Security, “over their lifetimes most high earners receive much less in benefits than they pay in taxes.”

Because Social Security taxes have been raised so many times, the program has also become a progressively worse deal for succeeding generations of middle-income Americans. As explained by the Congressional Research Service:

For workers who earned average wages and retired in 1980 at the age of 65, it took 2.8 years to recover the value of the retirement portion of the combined employee and employer shares of their Social Security taxes plus interest. For their counterparts who retired at the age of 65 in 2003, it will take 17.4 years. For those retiring in 2020, it will take 21.6 years.

Sander’s solution to Social Security’s ongoing history of fiscal problems is to spend more and raise taxes again. This time, he wants to eliminate the taxable maximum for people who earn more than $250,000 per year. This would remove the upper limit that high earners have to pay into the program.

Creating an unlimited payroll tax on Social Security is what politicians have done with Medicare. When implemented in 1966, the Medicare payroll tax was 0.7% of worker’s first $6,600 in wages, or a maximum of $46 per worker per year. Adjusted for inflation into today’s dollars, this is $337. Fifty years later, the maximum Medicare payroll tax is now 3.8% of wages and is technically unlimited. For example, workers who earn $1.3 million per year pay about $50,000/year for this tax.

A solution for Social Security’s fiscal woes that is a win-win for everyone (except politicians who use the program to stoke class warfare and wield power over citizens) is to give workers property rights to their Social Security taxes and allow them to accumulate in broad-based, low-to-medium risk investments.

For one modest scenario of many, consider what would happen if people who work for 45 years earning $50,000/year were allowed to invest only half of their Social Security taxes in personal accounts. If their investment returns were equal to the worst 45-year period of the S&P 500 from 1926-2013 (which includes both the Great Depression and Great Recession), they would retire with $427,892. If their investment return reflected the average performance of the S&P 500 during this period, each worker would retire with $879,800.

Fully implemented, such accounts would allow every worker to:

Given the above, it’s no wonder that many politicians have other plans for the program.