Stan Collender, “one of the world’s leading experts on the U.S. budget and congressional budget process,” claims in his Forbes column that the federal deficit is “falling rapidly as a percent of Gross Domestic Product and that means the national debt is less of an economic burden than it has been in the recent past.”

As documented below with data from the federal government, the second half of that statement is categorically false, and the national debt situation is now worse than in any time in U.S. history. However, like President Obama, Collender obscures this by narrowly focusing on the relative size of recent deficits instead of looking at the broader picture.

To begin with, the national debt is currently 103% of GDP, which is the largest it has been in U.S. history except for three years near the end of World War II: 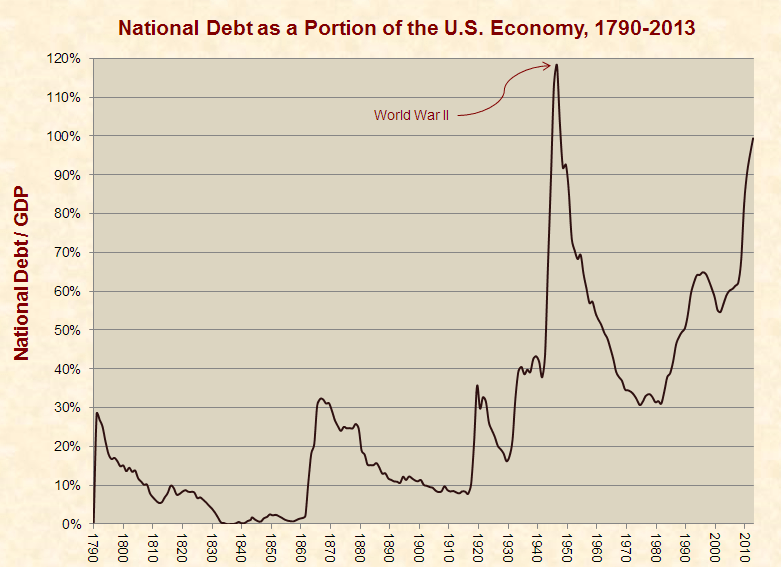 Although the debt is now 13% below the peak from World War II, the situation today is more ominous than it was then. This is because the World War II debt was a temporary spike that steadily declined when spending on the war subsided. In contrast, the current national debt is a systemic and escalating problem driven by ongoing federal policies. These primarily involve mounting expenditures on social programs (like Medicaid, Social Security, and food assistance), which have risen from 21% of the federal budget in 1960 to 60% in 2012.

In fact, the Congressional Budget Office (CBO) recently projected that under current federal policies, publicly held federal debt (a partial measure of the national debt) is on track to significantly and permanently eclipse the peak debt of World War II: 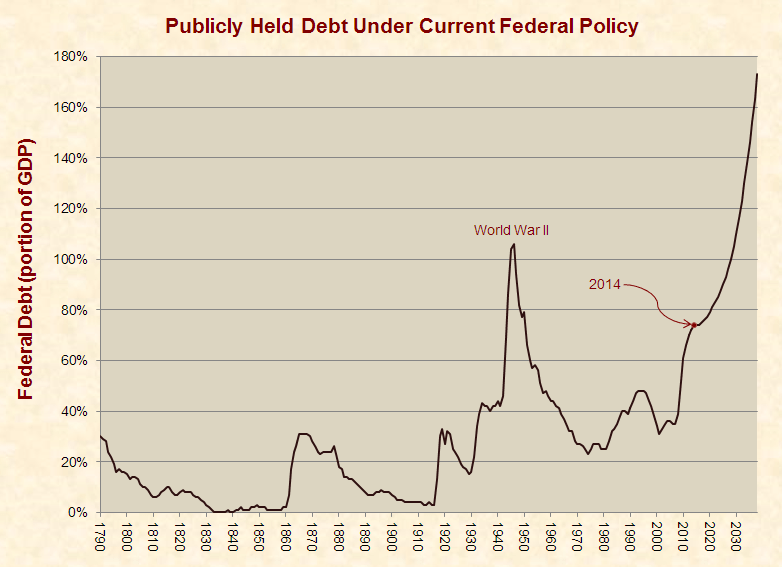 Such levels of government debt threaten harm to nearly all Americans, because they can depress economic growth, reduce living standards, drive up taxes, drive down government benefits, or trigger combinations of such results.

Worse still, CBO’s projections are based upon the questionable assumption that Obamacare’s Medicare cuts will “exert their full effect.” However, Medicare’s Chief Actuary recently reiterated that these cuts will likely cause “severe problems with beneficiary access to care” unless lawmakers “intervene.”

If lawmakers do intervene to prevent these cuts, Medicare’s Chief Actuary wrote that this will “lead to substantially higher costs for Medicare in the long range than those projected in this report.” This means that unless Medicare is rationed, the national debt is slated to grow even faster than CBO projects.