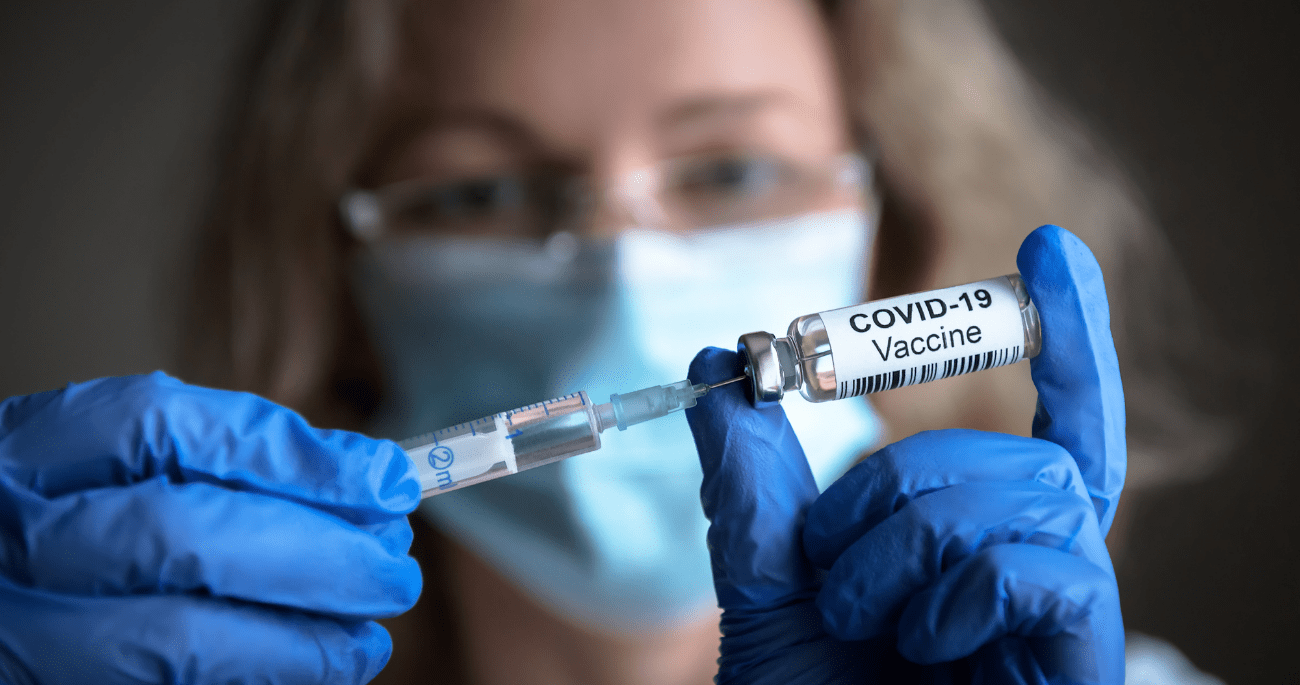 On Friday, September 17, the CDC published a study that refutes the common claim that Covid-19 is a “pandemic of the unvaccinated.” Coauthored by more than 50 MD’s and Ph.D.’s, the study contains data on the vaccine status of adults hospitalized with Covid-19 at 21 U.S. hospitals across 18 states during March to August of 2021.

Contrary to assertions from the Associated Press and Anthony Fauci that fully vaccinated people comprise only 1% of those being hospitalized or killed by C-19, the study found that 13% of patients hospitalized with C-19 had been fully vaccinated. Moreover, that 13% figure is just the tip of iceberg because the authors excluded from their study a large group of hospitalized C-19 patients, the bulk of whom were likely vaccinated.

About half of the omitted group and 27% of the C-19 patients in these hospitals were people with “immunocompromising conditions,” such as cancer, HIV, rheumatoid arthritis, psoriasis, scleroderma, and Crohn’s disease. In the words of an FDA official and 18 other coauthors published in a medical journal, “immunocompromised individuals” were “prioritized for early immunization” and are “plausibly more likely to be offered and seek vaccination” because they are highly vulnerable to C-19.

On September 21, Just Facts asked Dr. Wesley Self, the lead author of the study, to release the data on the vaccination status of the C-19 patients with immunocompromising conditions. He has not replied.

The authors of the CDC study also excluded another 25% of all people hospitalized with C-19 because they were partially vaccinated, “received a Covid-19 vaccine other than Moderna, Pfizer-BioNTech, or Janssen [J&J],” or “received doses of two different Covid-19 vaccine products.”

Accounting for all of the C-19 patients in these hospitals, including those the authors excluded, a majority may have been fully or partially vaccinated against Covid: 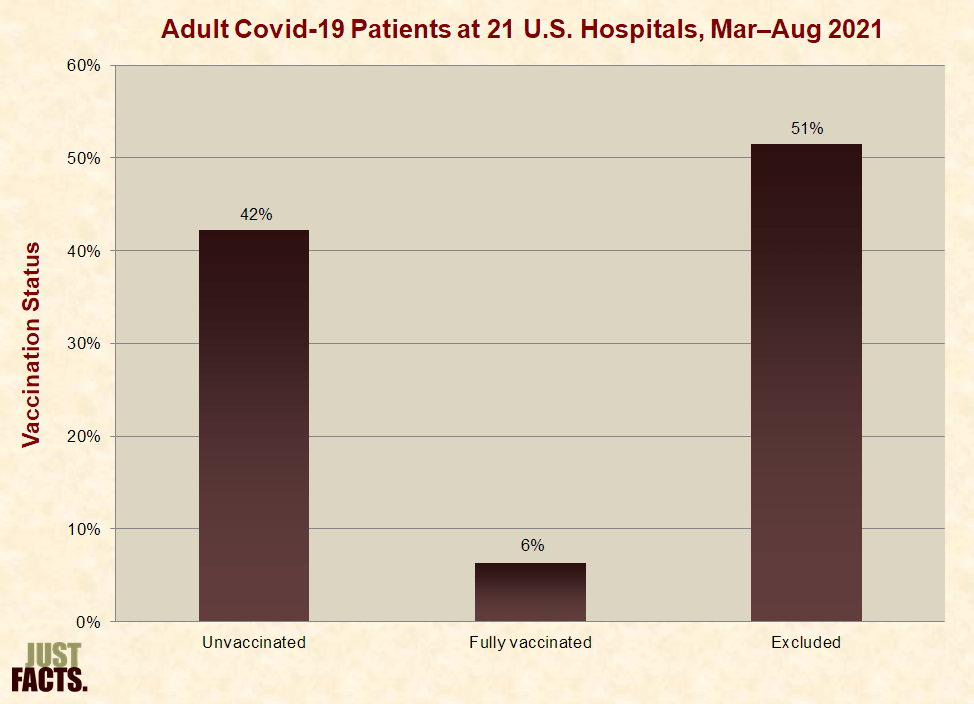 Filling the gap left by vagueness of the CDC’s study, a precise measure of the vaccine status of people who died from the Covid-19 Delta variant is available from the United Kingdom, where the government keeps detailed healthcare records on nearly all citizens. Relevantly, the U.S. and UK have very similar C-19 death rates and had roughly equivalent vaccination rates over the period of the CDC study.

In the UK from February through August 2021, 62% of all Covid-19 Delta variant deaths were among the fully vaccinated. This amounts to a conclusive majority in a dataset with virtually every death included.

The story behind the talking point that Covid-19 is “a pandemic of the unvaccinated” is a textbook case of how false statistics are born and proliferate. Hence, it provides valuable insights about the dangers of blind trust and how to recognize deceitful rhetoric.

Late in June 2021, the Associated Press published an article titled, “Nearly All COVID Deaths in US Are Now Among Unvaccinated.” Written by Carla K. Johnson and Mike Stobbe, it was republished or cited by more than 100 media outlets and so-called fact checkers like PBS, Snopes, Bloomberg, the Boston Globe, the Los Angeles Times, FactCheck.org, Yahoo News, and WebMD.

The article claims the AP conducted an “analysis” that found only 1.1% of all C-19 hospitalizations and 0.8% of C-19 deaths in May were due to “breakthrough infections in fully vaccinated people.” While using those decimal points that convey a false sense of precision, the authors slipped in this craftily worded admission: the AP calculated these rates based on “figures provided by the Centers for Disease Control and Prevention,” but the CDC has not published such rates due to “limitations in the data.”

Those limitations, in the words of the AP, include the reality that “some” states are “more aggressive than others in looking for such cases.” The word “looking” is a coy way of saying that the states don’t have a comprehensive system to count these deaths, a fact that throws the entire analysis into doubt.

With a subtle nod to that reality, the AP confesses that the “data probably understates” the number of vaccinated people who died from Covid-19. Compare that softly worded disclosure to the CDC’s explicit warning that its data on breakthrough infections “relies on passive and voluntary reporting, and data might not be complete or representative.” On August 25, the CDC strengthened that language to make clear that the “data are not complete or representative.”

Put simply, the AP’s statistics are meaningless because they are based on materially incomplete data. That was evident from the outset from a close look at the AP’s methodology, and it is now undeniable given the CDC study and UK data detailed above. Again, these indicate that fully vaccinated people comprise about 50% of all Covid-19 hospitalizations and deaths, not 1% as reported by the AP.

Nevertheless, Fauci appeared on the July 4th edition of NBC’s Meet the Press with Chuck Todd and parroted the AP’s bogus stat without mentioning any of its caveats. “If you look at the number of deaths,” declared Fauci, “about 99.2% of them are unvaccinated. About 0.8% are vaccinated. No vaccine is perfect. But when you talk about the avoidability of hospitalization and death, Chuck, it’s really sad and tragic that most all of these are avoidable and preventable.”

As Fauci uttered this misinformation, Todd, the political director of NBC News, never expressed a hint of skepticism. Acting like a mouthpiece instead of a journalist, Todd ended the segment by praising Fauci for “focusing” on his job and this “massive success story when it comes to vaccines and what this government-led effort did.”

Instead of correcting the AP and Fauci for misrepresenting CDC data, the director of the CDC, Dr. Rochelle Walensky, amplified it. During a July 16th White House press conference with Fauci by her side, Walensky stated that “over 97 percent of people who are entering the hospital right now are unvaccinated” and that Covid-19 “is becoming a pandemic of the unvaccinated.”

In turn, media outlets acted as megaphones for Fauci and Walensky without a word of critical analysis. This involved reports from the likes of ABC News, NPR, The Hill, CNN, Politico, Rolling Stone, USA Today, The Guardian, and the Washington Post, as well as three separate articles from the New York Times.

The Times later conducted its own analysis using the same ruse as the AP, reporting that fully vaccinated people were only 0.1% to 5% of Covid-19 hospitalizations across 40 states since vaccinations began. Buried near the end of the story, the Times revealed that it calculated these rates by lumping C-19 patients “with unknown vaccination status” into the “data for individuals who were not fully vaccinated.”

One week later, the Times began walking back those claims. On August 17, it alleged that reports from seven states with “the most detailed data” indicate that “breakthrough infections accounted for 12 percent to 24 percent of Covid-related hospitalizations.”

Despite those larger figures—which are still far removed from reality—the Times did not correct any of its earlier articles touting figures of 1% to 3% accompanied by quotes like this:

“The takeaway message remains, if you’re vaccinated, you are protected,” said Dr. Celine Gounder, an infectious disease specialist at Bellevue Hospital Center in New York. “You are not going to end up with severe disease, hospitalization or death.”

The most glaring lesson from this affair is that people entrusted to protect and inform the public are untrustworthy. Government officials with prestigious credentials and prominent media outlets repeatedly misreported the facts of this simple matter with life-or-death consequences. Thus, it is crucial to learn and apply proven methods to sort out the claims that surround important issues.

Secondly, Covid-19 still poses a considerable risk to some fully vaccinated people because a vaccine is only as good as each person’s immune system. Vaccines don’t directly attack virulent microbes in the same manner as antibiotics or anti-viral medicines. Instead, vaccines trigger people’s immune systems to react more quickly than usual and kill pathogens before they can do harm. If a person’s immune system is compromised by factors like poor general health, old age, obesity, immunosuppressing drugs, or lack of sleep, a vaccine will be less effective or ineffective.

Also, the currently available C-19 vaccines create an immune response to only one part of the SARS-CoV-2 virus (the “Spike” protein). This produces narrower immunity than exposure to the actual virus. In accord with this fact, a study in Israel that has not yet undergone peer review has found that the Pfizer vaccine is much less effective in protecting against the Delta variant than naturally acquired immunity.

Third, none of the above means that C-19 vaccines are ineffective. Randomized controlled trials, which are the gold standard for determining clinical efficacy, have found that the C-19 vaccines significantly reduce the odds of having a bout of severe Covid-19. The Pfizer vaccine, for example, reduced the odds of severe C-19 by 71% to 100% for people who were not immunocompromised over a period of six months. Whether or not this protection lasts and if the benefits exceed the harms will be the subjects of upcoming articles.

To receive the latest research from Just Facts, sign up here.

Leave a Reply to B David Poe Cancel reply